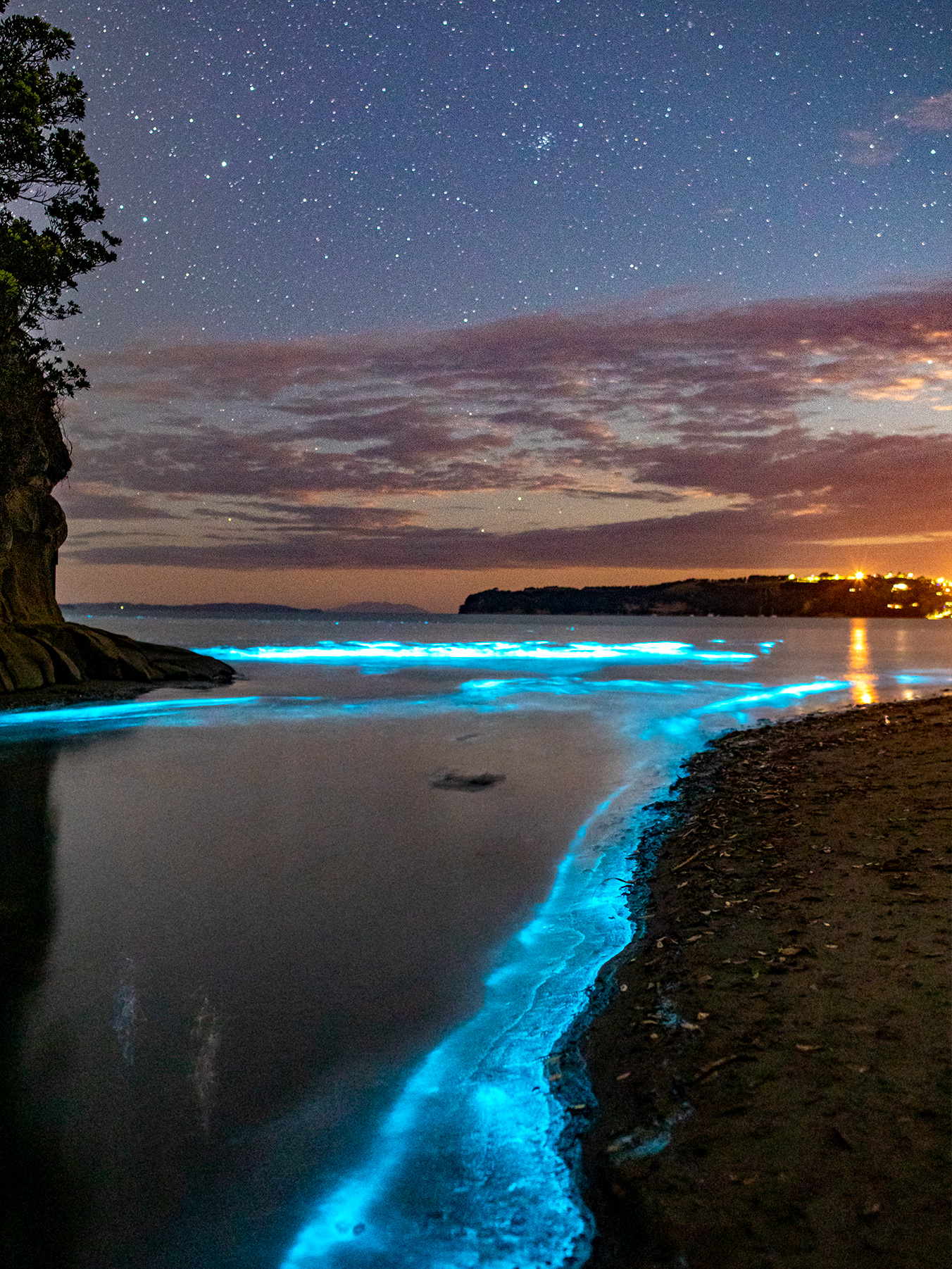 On a recent Saturday evening about 9pm, Siouxsie Wiles, a microbiologist and one of New Zealand’s top experts on all things Covid, left her central Auckland home in a rush. She took the family along. People had alerted her that something was afoot on the Hibiscus Coast, a 45-minute drive north. It was getting dark when Wiles arrived at Orewa Beach. But the waves lapping on the sandy shore were glowing a lurid blue.

What Wiles saw that night wasn’t the latest manifestation of an infectious disease. It  was a natural phenomenon that has recently become more common in New Zealand. The technical term is marine bioluminescence. It refers to a glow produced by algae when they are being moved, disturbed or distressed. And since it looks spectacular, it has attracted quite a following. Over the past few weeks, throngs of people, many of them equipped with expensive cameras and tripods, have been gathering every night on Auckland beaches to look for it and to post photos on social media. They call themselves “biohunters”.

Unpredictability is part of the attraction. On some nights, nothing happens at all. At other times, people spot a bit of sparkle in the surf. And then there are these magical nights when, seemingly out of the blue, the thing goes off. “You’re standing there in the dark,” Wiles says. “Then, suddenly, there’s a flash of lightning that goes sideways on a wave. A bit like a surfer.”

Wiles, who is known not just for her tough talk on Covid but also for her bright pink hair, has always loved things that glow in the dark. When she left London more than 10 years ago to join the University of Auckland, it wasn’t just the job that attracted her. She also knew that New Zealand had some interesting creatures she wanted to spend more time with. There are the glowworms, of course. (“I try to go to Waitomo every year to see them,” she says.) And the Latia neritoides, a freshwater snail that can be found in the streams of the Waitakere Ranges. (“When you poke it, it produces a glowing goo.”) Plus some rare species of bioluminescent mushrooms. (“Some people got in touch because they’d found these glowing bits of rotting wood — and then they came in and brought me the logs.”)

As the head of something called the Bioluminescent Superbugs Lab, Wiles has been dealing with bioluminescence for years, researching glowing bacteria partly with the aim of finding new antibiotics. But until recently Wiles had never seen marine bioluminescence in the outdoors. Her first time, about a year ago, also on the Hibiscus Coast, was “just so wondrous”, she says. “Having spent 20 years or so studying these things, I still found it amazing. Oh, it was magical.” She pauses, then explores another memory: “It was similar to those fireflies in Washington DC which I’d never seen either, only worked with their genes. And then, I biked around the grassy areas between the monuments. And I went, like, whoa!”

Bioluminescent algae can be spotted all over the globe — in Costa Rica and Australia, on Taiwan’s Matsu Islands and on the beaches of San Diego. News of the recent appearances near Auckland spread quickly on social media. Stacey Ferreira, the 26-year-old owner of an online gift shop in Gulf Harbour, launched a Facebook group in January that quickly mushroomed to 3500 followers. A typical posting reads: “Anyone going bioluminescence hunting tonight? Where is the best place to find it?” (Big Manly, Little Manly, Stanmore Bay, Arkles Bay or Orewa are usually recommended.) Another favorite topic: Which conditions are conducive to bioluminescence? The occurrence of red algae during the daytime are one indication. Clear skies after rainy days seem to be beneficial as well. High tide trumps low tide, some say. And midnight is generally considered to be bioluminescence’s finest hour.

Wiles joined the Bioluminescence Hibiscus Coast group on 14 January. A couple of days later, on a Saturday, people were suggesting that Orewa Beach would be the place to go. The sky was clear. Some fishermen were still around, the light from their torches illuminating the water. The Wiles family, which includes a husband and a 14-year-old daughter, tripped over fishing rods. Not the best of conditions. Nevertheless, they got lucky. “Bioluminescence on Orewa Beach right now at the south end,” Wiles posted in a triumphant message to the group. Then she tried another spot nearby: the boatramp at the Orewa Arts Centre. And there it was again. Wiles went into the water right then, splashing around, setting off the algae’s defense mechanism. Pure joy. A video taken on Wiles’ phone and posted to the group provides evidence.

Finally, after an hour at the beach, the family called it a night. Wiles got herself a souvenir, a plastic bottle filled with a sample that she intended to send to the Cawthron Institute in Nelson for research purposes. Taking the water bottle home and putting it in her kitchen, she made an amazing discovery. “It glittered when I swished it,” she says, adding that she strongly advises other people not to try the same. “The algae can be toxic.” The next day, Wiles left a message with the institute. She didn’t hear back. Then she went on a short holiday. Upon her return, Wiles found the water bottle sitting in her kitchen. Just like she’d left it. But when she swished it once more, the glitter had gone.