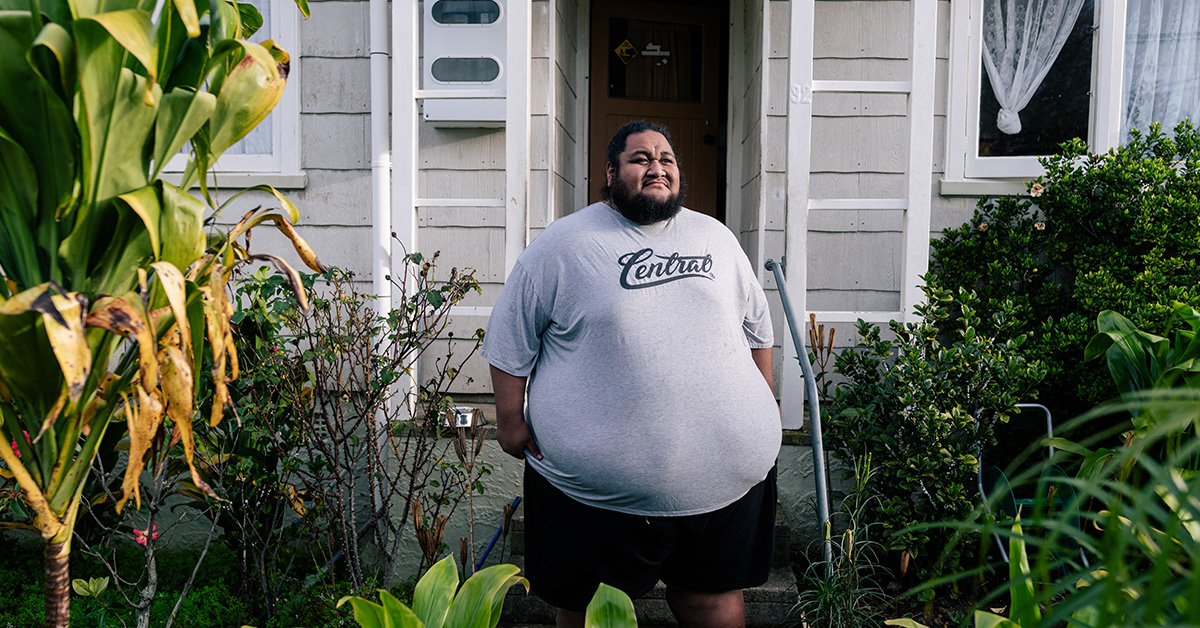 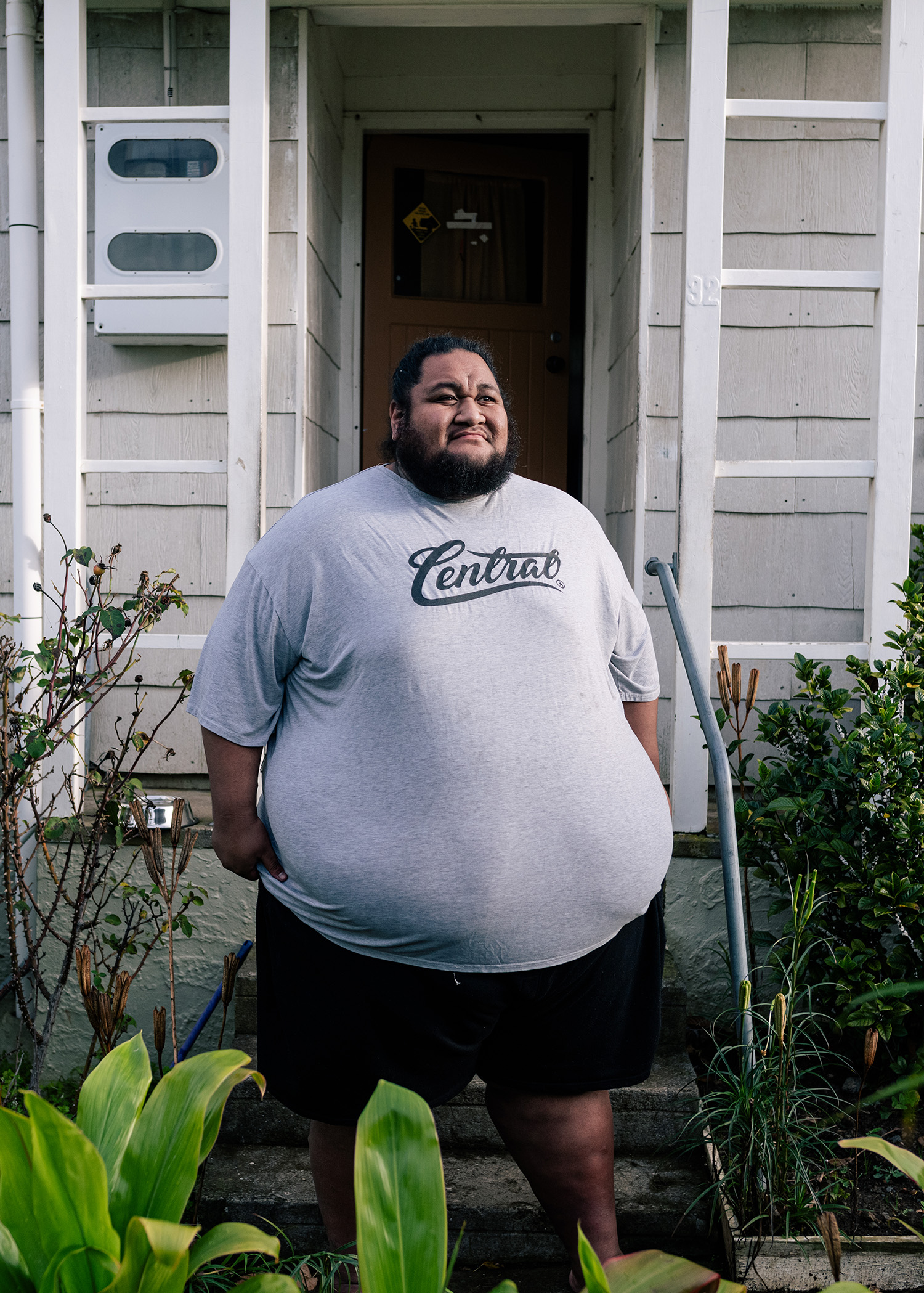 Despite decades of alarm about rising rates of obesity, as a nation we’re getting fatter — clear evidence our approach so far simply isn’t working. What are the costs of getting things so wrong, and what do the experts say we need to do to tip the scales in the right direction once and for all?

Isoa Kavakimotu sees himself like Boba Fett: “A simple man making his way through the galaxy.” Photo: Cameron James McLaren.

In Owen Marshall’s short story “The Fat Boy”, a blond schoolboy with a “froglike” face and thick, flabby legs is seen watching every time a crime is committed in an unnamed small town. The fat boy is sly, evil, and imbued with a knack for being where he is least desired. Silent and staring, the fat boy is a “harbinger of trouble” and despised by the townspeople. He is eventually set upon violently, though his beaten body has mysteriously vanished by the time the mob retreats. Published in 1984 and considered among Marshall’s finest works, “The Fat Boy” plays on the social unease, even disgust, that fatness fosters: the boy’s body and appearance is central to his position as loathed outsider. “No one likes a fat kid staring at them”, one character says, and you can imagine him shuddering.

Though it was written nearly 40 years ago, the specific kind of distaste Marshall described then is instantly recognisable today. Fatness is still widely believed to be a personal — even moral — failing on the part of the fat individual. This judgement impacts all kinds of areas of fat people’s lives. Numerous studies have shown they are frequently regarded as less intelligent and lazier than thin people, and a person’s weight can impact both their ability to land a job and how much they get paid. At a glance, they are judged not only on their physical appearance, but on their health, competence and worth as a person. As the author Roxane Gay writes in her 2017 memoir, Hunger, shock registered at her appearance betrays “how little people think of fat people, how they assume we are neither smart nor capable if we have such unruly bodies”.

The prejudices held and expressed about fatness are also unique in that people comment on or ridicule people’s weight far more freely than they make other personal remarks.

Remember Winston Peters in 2018 telling the Speaker of the House to “throw fatty out” of Parliament during a disagreement with National MP Gerry Brownlee? Or Judith Collins saying we all need to “take personal responsibility” for our “little weaknesses”, while on the 2020 campaign trail — adding that fat people shouldn’t blame systems for personal choices.

Radio host Rachel Smalley will likely always be remembered for her 2014 on-air gaffe where a live microphone picked up her comments calling women weighing more than 72 kilograms “heifers” and “a bunch of lardos”. Smalley apologised profusely, saying she did not realise she was on air, but she is far from the only New Zealander to hold views like this — most just don’t get caught accidentally airing such comments on live radio.

New Zealanders are, on the whole, getting bigger. According to the latest Health Statistics, New Zealand is the eighth-fattest nation in the OECD, with about one in three New Zealanders aged 15 or older now classed as ‘obese’. That means 34.3 per cent of us — close to 1.4 million adults — have a body mass index (BMI) of more than 30 (anything above 25 is considered overweight and 30-plus is obese — though more on the usefulness of this measurement later). And that percentage has been slowly creeping up: in 2011, the number was around 29 per cent.

The annual Ministry of Health survey for 2020/21 also found that, among children, obesity rates had risen by a third since the previous year’s survey, from 9.5 to 12.7 per cent. The ministry noted on its website that prior to this childhood obesity rates had been relatively stable (some experts believe issues of food insecurity exacerbated by lockdowns and the pandemic may partially explain the jump).

At the population level, these numbers are cause for concern: obesity is likely to exacerbate or cause health problems including diabetes, fatty liver, arthritis and soft tissue problems. But the way we have tried to tackle obesity at the individual level has been counterproductive, and even harmful. This is because despite the fact that telling people to lose weight rarely works, we’re still stuck in a mode of thinking which favours individual personal responsibility — just try this new diet, just join a gym. Meanwhile, high-energy, high-sugar food is more abundant and affordable than ever, too many of us are stressed and time-poor, and initiatives to get more of us out of our cars on our daily commute are met with resistance every step of the way. We’ve spent decades focusing on the wrong things, hitting our heads against a brick wall and wondering why it won’t budge. And all the while we’ve kept getting bigger as the healthcare costs keep rising.

Obesity expert and retired endocrinologist Robyn Toomath says our approach to tackling obesity is like trying to reduce melanoma rates by telling people to change their skin colour — and just as ineffective. What’s worse, fat patients blame themselves for failing to lose weight, despite the fact that for most people doing so is a near-impossible ask. The way diet and exercise affect people’s bodies varies vastly, and numerous studies have found that the stigma associated with obesity can affect someone’s physical and psychological health just as negatively as the weight itself.

Pretty much any way you slice it, we’ve been tackling obesity all wrong. We have failed to reduce obesity rates, and we have failed to make fat people thin — though we have succeeded in making many people feel terrible about their bodies. But it’s not too late to change. It’s time to rethink everything you think you know about obesity.

You could call  Isoa Kavakimotu a fitness influencer. His Instagram account, which has more than 24,000 followers, is mainly workout videos, peppered with a few jokes and memes. One video shows him squatting while holding a sizable kettlebell; in another he swings a 20-kilogram weight plate up and over his head. In a video posted in February, he turns to the camera, his 30-plus-kilogram dog slung over his shoulders because he left the leash at home. “Ah well,” he says, jokingly. “It’s a free workout.”

Kavakimotu, a digital media specialist for a community group in east Auckland, sees himself as less #fitspo, and more like Boba Fett the Star Wars bounty hunter, just “a simple man making his way through the galaxy”. The Instagram account, the videos: they’re simply a way to keep track of his fitness journey. When Kavakimotu started posting his workouts online a year and a half ago, the then-28-year-old had reached a weight where he struggled to join in with mates for a friendly sports game, where every day meant doses of pain killers for his aching back. He couldn’t do life’s basics, he says: moving around his house was difficult; walking down the street was even harder. At 1.91 metres tall, his weight had topped out at 339 kilograms — even for a tall guy, that was an inhibiting amount to carry around.

Kavakimotu has always been big. At school, he wore the largest uniform they had. He was well aware, even as a teen, that if he got any bigger he wouldn’t have anything to wear at all. Fitting into chairs was a struggle, whether on public transport or at a barbecue — Kavakimotu describes the white plastic lawn chair ubiquitous to back gardens as the bane of his existence. “I think people look at it and go, ‘Oh, it’s just a chair’, but I don’t think you understand how embarrassing that is,” he says. “It’s already bad enough that I’m frickin’ huge.”

Kavakimotu describes the white plastic lawn chair ubiquitous to back gardens as the bane of his existence. “I think people look at it and go, ‘Oh, it’s just a chair’, but I don’t think you understand how embarrassing that is.”

He’s tried every diet under the sun, from keto to no-carb and juice fasting. At one point he was eating so much canned tuna he realised he was putting himself at risk of mercury poisoning. None of the diets stuck — they were too restrictive. It would be tough too when his family would ask him to get KFC for them, which he would, and then squirrel himself away in his room to eat his separate dinner in private.

Trips out of the house became an anxiety-inducing experience. Eventually, it was just easier to stay home than face the embarrassment, judging eyes, or his own self-defeating, critical thoughts. “I was always ready to beat myself up before anyone else could,” he says. “Beating people to the punch because hearing it from myself is better than hearing it from other people.” At times, he contemplated taking his own life.

Growing up, Kavakimotu moved house almost every year. When he did have a place to live, he’d be sharing a small two- or three-bedroom house with nine or 10 other family members. The family was time-poor, with parents working ridiculous hours trying to put food on the table. When he didn’t have a place to live, he’d be sleeping in a car, eating takeaways for dinner — after all, cars don’t have a kitchen. We may each make our own choices, but we don’t all have the same set of options to choose from.