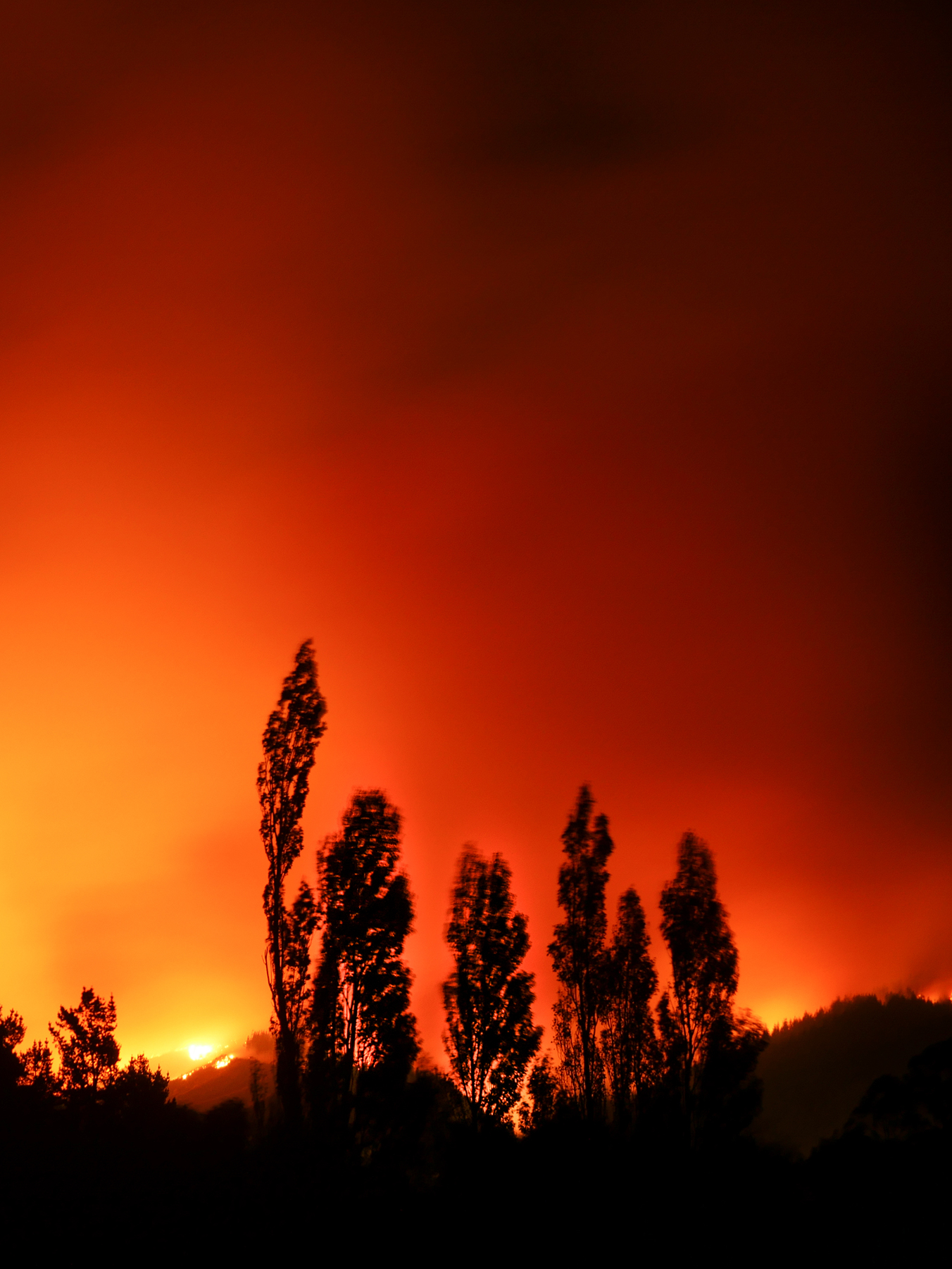 For two weeks, helicopter pilots battled one of New Zealand’s worst wildfires. That was just a preview.

On the 13th day of the fire, Bill Reid shut off the throttle of his helicopter and watched a patch of scorched brown branches rush towards him.

It was 17 February 2019, and Reid had just emptied about 800 litres of water onto a blaze that was raging through the Tasman District’s Pigeon Valley, a grassy enclave punctuated with lifestyle properties and farms. Flying at about 400 feet, Reid kept his shoulder strap loose so he could lean out of the cockpit of his Squirrel (an Airbus AS350) to pinpoint where to drop the water. Usually, he wore a heavy Vietnam-era helmet. That morning, however, his son Toby, also a pilot, had lent him a brand-new crash helmet. It was made of carbon fibre, durable and built for impact.

Reid toggled the release valve on his monsoon bucket, which dangled about eight metres below the helicopter. He watched with satisfaction as the payload hit its mark and steam spewed up from the earth.

Several other pilots were working nearby, all dipping their monsoon buckets into a nearby pond, all pummelling hotspots. Reid lived in nearby Eighty Eight Valley, but the others had come from all over — including Marlborough, Wellington, the West Coast and Canterbury and as far north as Warkworth — to fight one of the biggest wildfires ever seen in New Zealand. At its height, the blaze spanned 36 kilometres. Nearly two weeks in, 23 helicopters and two fixed-wing aircraft had been working in simultaneous operation. At the time, it was the country’s largest-ever aerial firefight.

After releasing the water, Reid accelerated and climbed away from the flames. Then he felt the helicopter “yaw” — suddenly twist — to the left. Then it yawed again, in the other direction. Then there was a loud bang.

Bill Reid had seen big blazes create vortexes that sucked small trees and fence posts out of the ground, propelling them hundreds of feet into the air.

At 66 years old, Reid was one of the country’s most experienced and respected chopper pilots. As he liked to say, he was born to the job — his father, himself a pioneering helicopter pilot, introduced Reid to the family business when he was in primary school. By the time he was 10, he was cleaning out hangars at the local aero club in exchange for flying lessons.  As a teenager, he read accident reports cover to cover. By then he had spent more time learning to fly planes than he had driving cars. During his 20s, Reid piloted helicopters for the fledgling venison industry, keeping the aircraft steady as shooters hung out of the chopper door aiming tranquiliser guns at deer. He’d flown into mountain ranges on search and rescue missions in dicey weather. Reid had written about the particular pressure of being a helicopter pilot — how you only get called in when things turn desperate. “When the fire is out of control, or the crash victim is too far away from road access to make it to hospital within the ‘golden hour’. People expect you to fly through smoke, cloud, fog, darkness.”

Reid had also flown in more fires than he could count — both massive controlled burns and firefighting missions like this one. Large fires fascinated him. He saw them as an intense, exhausting test of his abilities. He’d seen big blazes create vortexes that sucked small trees and fence posts out of the ground, propelling them hundreds of feet into the air. He’d learned to turn his head when approaching a wall of flame so as not to burn his face. Firefighting was one of the more dangerous jobs he had done. But when a call came, he got to the scene as fast as he could.

After the bang, the helicopter shuddered violently. Reid was used to compartmentalising his stress, but according to the Fitbit strapped to his wrist, his resting heartrate jumped from just below 60 beats per minute up to nearly 110. Suddenly, he lost all ability to maintain direction. He realised that the semi-rigid urethane casing of the monsoon bucket had gone totally floppy — almost like a plastic shopping bag. With the helicopter accelerating, the line had caught in the Squirrel’s rear rotor — the part of the aircraft that controls direction.  Reid was 400 feet above the burned earth and he was going down.

He called “Mayday, Mayday” into his radio. The distress signal, used only in life-threatening situations, pinged around the headphones of the other pilots in the air. One of them was his daughter-in-law, Rachael Reid, flying the air attack command helicopter high above the scene. It was her first outing during the fire. Up until that point, Rachael, a qualified pilot for 12 years, had been organising part of the helicopter team from the ground. But that day, she had stepped in to give some of the other pilots — including her husband Toby — a break.

Rachael had been speaking to Bill over the radio minutes earlier, so she knew where he was working. As soon as she heard the distress call, she turned her helicopter around. Next to her in the cockpit, the air attack supervisor started calling emergency services. Beneath her, Rachael could see the Squirrel in a downwards spiral. She knew she needed to get to Bill as quickly as possible.

Bill spotted a forestry skid site ahead of him where there were emergency-service personnel. He tried to steer to it, but every time he aimed the helicopter in that direction, the machine pulled away. He felt the body of the helicopter start to rotate quicker. Reid knew that if he kept using the throttle without a tail rotor counteracting the helicopter’s motion, the helicopter would start spinning uncontrollably. He realised he could not make the clearing. He had trained dozens of pilots in this exact scenario. When he was about 50 feet above the ground, he shut off the engine to stop the spinning. But now there was no power from the rotor blades to keep him in the air. There wasn’t any time to think, just instinct. It was only at the very last second, as he crashed through burnt pine trees, that he closed his eyes and stopped flying.