The Hard Grind: Is This New Zealand Sailing’s Next Star? 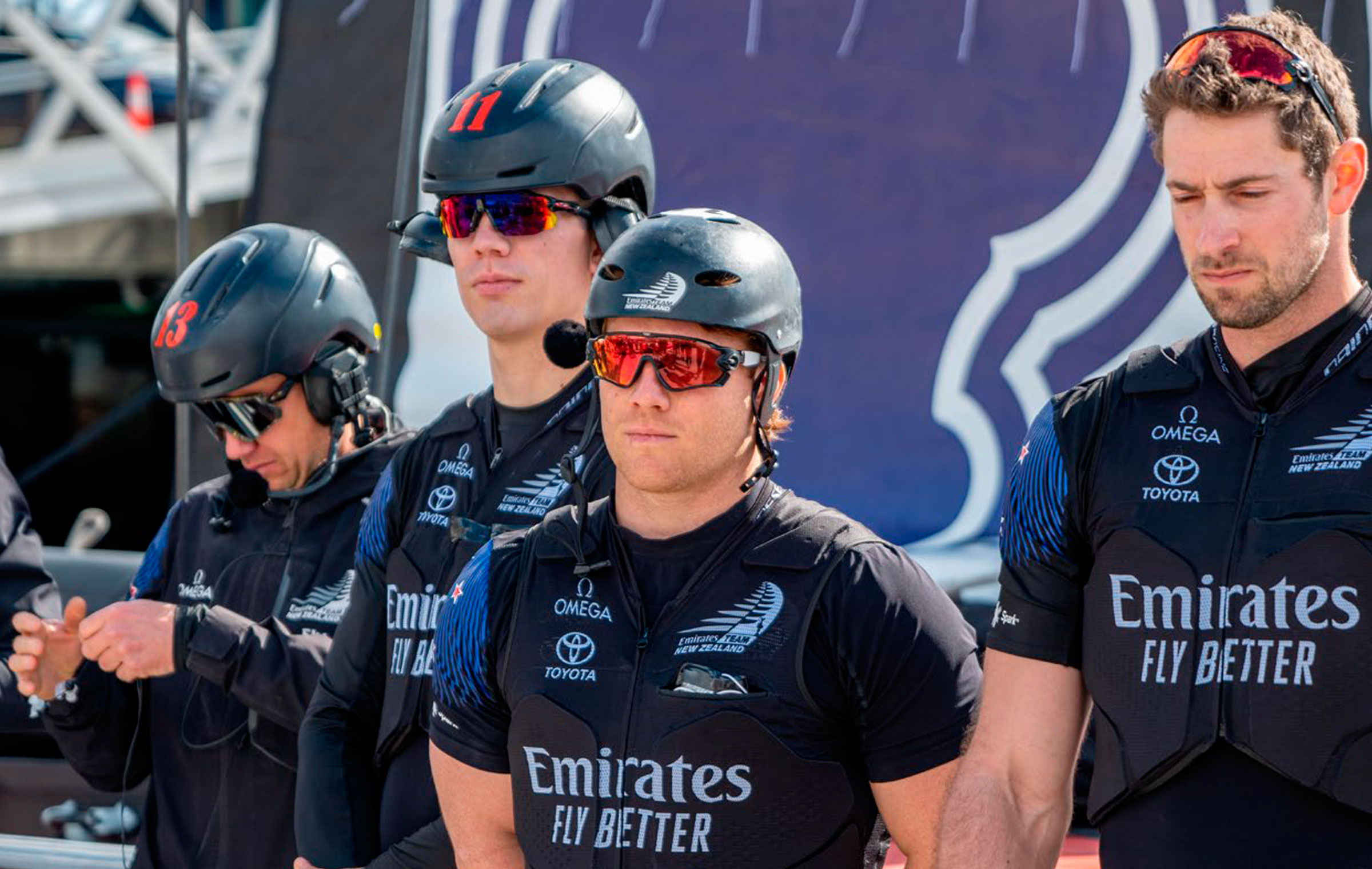 The Hard Grind: Is This New Zealand Sailing’s Next Star?

How a builder won a place among sailing’ s elite.

Deep inside Emirates Team New Zealand’s base in Auckland’s Viaduct, Dan Plews couldn’t believe the numbers scrawled on the whiteboard in front of him. It was December 2019, and training for the America’s Cup defence in early 2021 was well under way. Plews, the syndicate’s head of physical performance, was assessing the performances of the team’s grinders.

In particular, he was measuring the average and maximum power output achieved on the gym’s grinding machines, the back-breaking two-handed manual winches which spin backward and forward, replicating the models onboard the Cup boats. Generally held twice a month, testing days are when the ultra-fit members of Team New Zealand brace themselves for extra pain.

As Plews analysed the numbers he had recorded for each athlete, he noticed an extra column had been added to the board. The handwriting wasn’t his, but the data closely mirrored the achievements of Plews’ elite team. There was no name on the column — just the initials F.H.

The sailing veteran had a fair idea who this “phantom grinder” was. He had noticed a stocky redhead working out in the base gym, usually early — around 5.30am — before the team arrived, or late in the evening after most people had already gone home. He was friendly, if a little quiet, but Plews recognised him as one of the team’s builders, and realised he’d been taking an interest in the crew training sessions. Plews has worked with some of New Zealand’s most high-profile Olympians, including Eric Murray and Hamish Bond. But he had no idea of the level of bloody minded determination he was dealing with.

A builder joining the America’s Cup sailing team? It’s as if a baggage handler was suddenly propelled into the Black Caps.

Several months earlier, Finn Henry started a job with the Team New Zealand shore crew, the underrated gang that play a critical role in each campaign, building, maintaining, refining and often fixing the boats. He’d heard about the potential role, then met some of the team hierarchy at a Christchurch pub while they’d been in town for a wedding. Henry was employed on a fencing project in Christchurch at the time but had previously spent two years as a deckhand and maintenance engineer on an offshore superyacht — at that point, this was about the sum total of his sailing experience. He was honest, telling them he was an “unqualified builder”, and they were receptive, noting his enthusiasm.

They took him on and Henry moved to Auckland in March 2019, “fizzing” about working at Team New Zealand’s 6000 square metre base on the eastern edge of Wynyard Quarter.

At that point the Cup was almost two years away, but the sailing team were deep into their preparations, especially the grinding unit, who were beginning the process of building their strength and stamina ahead of the launch of the team’s first AC75 yacht later that year. To build both fitness and camaraderie, some of the shore crew started going to the gym most nights after their shift. Henry went too — he wanted to cement his position among the boatbuilders and engineers. But once he got on the grinding machines, his shore-crew teammates couldn’t help noticing how good he was. “I remember thinking at the time, ‘I have to be careful because I don’t want to get too hooked into this’,” Henry says.

Henry got hooked. He started training before or after work and sometimes during the day, as many as 15 hours a week on top of his work hours. If there was ever a quiet time, his boss would let him sneak off to do an hour in the gym. This carried on for several months, and as 2019 drew to a close, Henry had decided that he wanted to sail for Team New Zealand. He faced considerable odds to achieve this. For a start, he didn’t have the elite training background that characterised most of the grinding team (which included several Olympians). His life had never revolved around sport. When many of the sailing team had been preparing for trials in 2018, Henry was backpacking around Central America. He was also on the smaller side, weighing around 84 kilos. But he had drive. “I had a funny feeling that if I just kept going it might work out,” he says.

One day, Plews ran the grinding unit through some key test sessions, measuring strength, power, aerobic fitness and recovery, composed of 10 gut busting three-minute bursts on the grinder with a two-minute rest in between. The statistics were recorded, including the power produced for every rep. When everyone had gone home for the day, Henry replicated the session.

Plews has worked with some of New Zealand’s most high-profile Olympians. But he had no idea of the level of bloody minded determination he was dealing with.

Eventually, he began adding his own numbers to the whiteboard. It was a slow burner, but heads had started to turn. “It shook the other guys up a little bit,” Plews recalls. But Plews and the Team New Zealand hierarchy didn’t realise that Henry was gunning for a spot on the team. “Initially we thought it was just him taking a massive interest in what the other boys were doing,” says strength and conditioning specialist Adam Storey. “Then when we were actually seeing some of the numbers that he was pumping out, there was a little bit of chat. “Sh*t, he could be a legit contender.” “A lot of these guys are thrashing themselves in the team environment — it’s handy to pick off each other’s energy — but he was doing it by himself after a full day’s work. It was pretty incredible.” 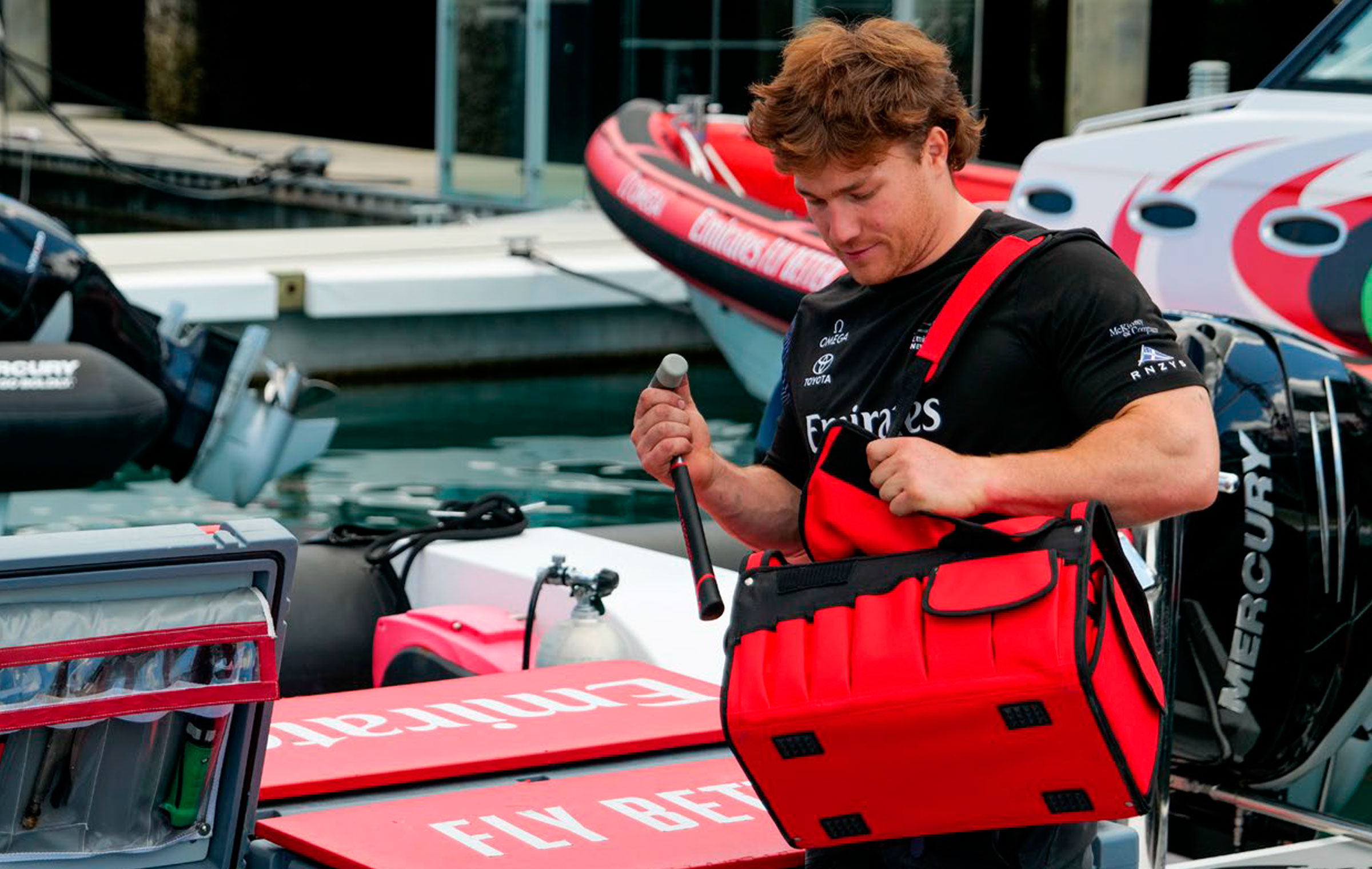 In the first quarter of 2020, Team New Zealand realised they would have to bolster their grinding contingent. The 75-foot foiling monohulls used for the 36th edition of the America’s Cup require a massive amount of hydraulic power, with the “fuel” produced by the eight grinders on the 11-strong crew. “It’s bloody hard,” explains Plews. “If you look at some of their heart rates, they will be 10 to 15 beats below their maximum for 20, 25 minutes at a time.” Grinders need real strength; during certain manoeuvres the load can be very high, as the torque needed to rotate the grinding machines increases exponentially. Other times, it’s maximal speed that’s required, with frantically fast repetitions. The sailors also need to be aerobically fit, in order to recover quickly between each bout.

Team New Zealand had confirmed a 10-man grinding team — which included former Olympic medallists Joe Sullivan and Simon van Velthooven and ex-kayaker Steven Ferguson — in June 2019, but when the reality of sailing two races in a day became clear, it was decided they needed to add two more to the roster. Henry upped his efforts,encouraged and advised by his friend Louis Sinclair, who was already on the grinding team. “I knew they were looking for people, but I was told they wanted two really big guys,” recalls Henry. “I would be training, and they would be bringing these guys in that they were looking at doing a trial with. It was real annoying for me. I thought; ‘I’m fit as and I’m here’.”

“We had in our mind what we were looking for, [in terms of] body weight, aerobic and anaerobic,” Storey says. “Finn was definitely on the smaller side of things, so [he did] have his back up against the wall.” But Henry didn’t relent. He trained as much as possible and tried to remind those that mattered of his readiness, especially when he learned about a test day for some outside triallists. “I wasn’t invited to do those tests, but the day before they did them, I did the exact same tests,” says Henry. “It got to the point where if they didn’t choose me and I still beat those guys, that wouldn’t be right.” In July 2020, Henry made it onto the team.

Henry describes the sets in starker terms. “By the last one you are poisoning yourself with lactic acid, it’s heinous.”

Since his selection Henry has bulked up, putting on almost 10 kilos. He’s thriving in the highly competitive team environment. “Even the guys that I was gradually starting to beat were still giving me advice, how to get better, what to eat,” says the 26 year old, who hasn’t had the years of professional nutrition advice elite athletes receive. Henry’s capacity for pain has increased, evident when he describes the lactic threshold test prescribed by Plews, which involves sets of sprints on the training bike with minimal rest in between. Lactic acid builds up in muscles which are under extreme exertion, and elite athletes train their bodies to clear the by-product quickly, something casually described as “pushing through the pain barrier”. Henry describes the sets in starker terms. “By the last one you are poisoning yourself with lactic acid, it’s heinous.”

Come 6 March, when the men on board Te Rehutai begin the defence of the Auld Mug, Henry should be more than ready. Plews and Storey take a quiet satisfaction in the journey of the former builder from Kaikoura. The evolution of the foiling yachts in the America’s Cup since 2013 has opened the door for different kinds of elite athletes — cyclists, rowers, and kayakers among them — to bring their physical strength and stamina to the mix on a racing yacht. But a builder? It’s an achievement rarely seen in this hypercompetitive, professionalised sporting era. It’s as if a team baggage handler was suddenly propelled into the Black Caps.

“The numbers that he did right from the start showed something. [But] it’s always talent meets hard work,” Plews says. “The amount of work he put in specifically with this goal in mind cannot be overlooked.”

Michael Burgess has reported on sport in New Zealand since 2005, winning several national awards. He has covered the Olympic Games twice.

Henry and his team mates listen to a pre-dock-out briefing. Photo: Supplied.