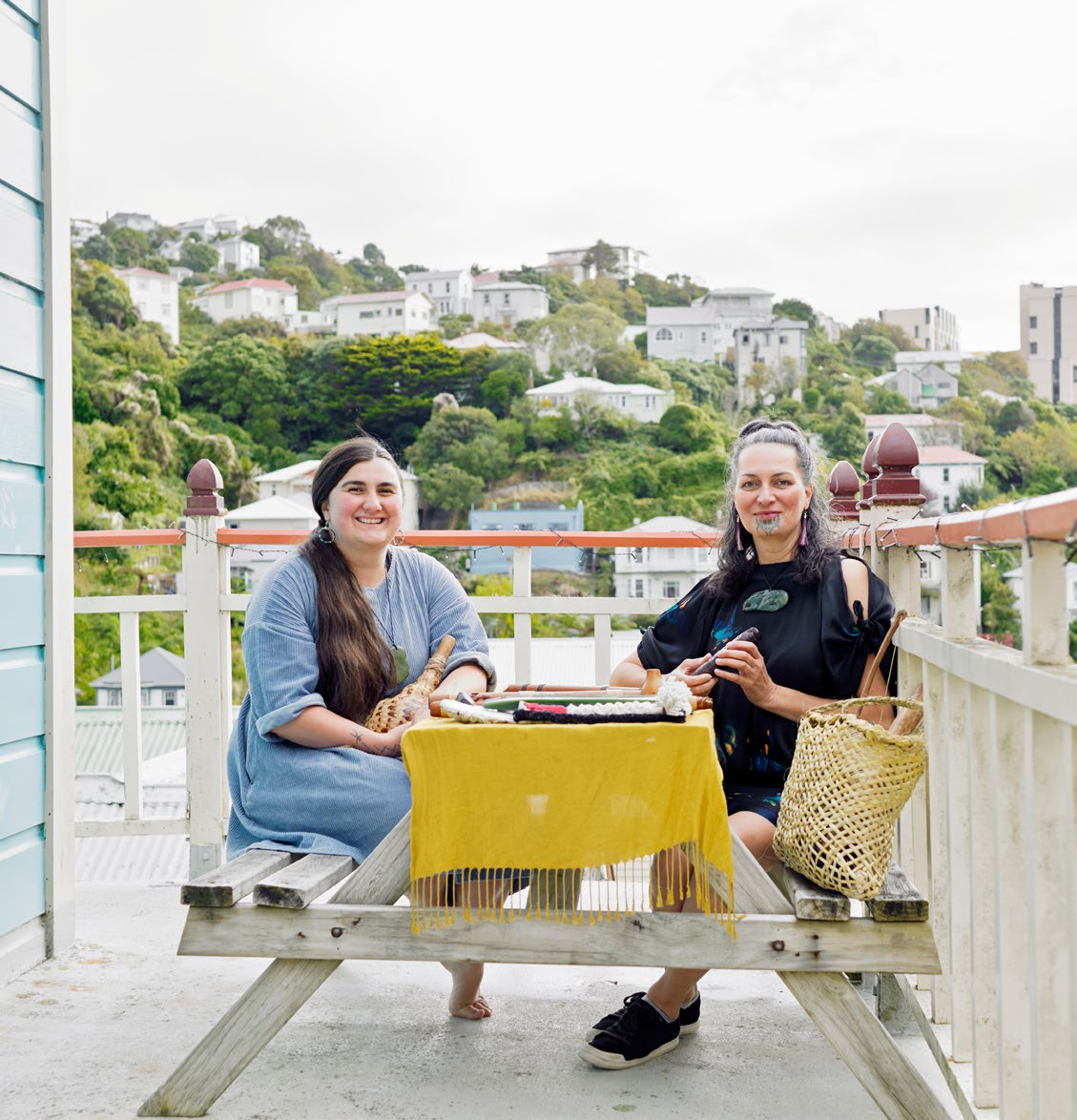 The use of taonga pūoro “traditional Māori instruments” has been reclaimed in recent decades. Two practitioners discuss how their music links back to landscape.

In 1907, the New Zealand government passed the Tohunga Suppression Act, which banned a range of medicines, tools, and important ceremonies from Māori culture. The Act aimed to replace these practices with Western medicine. The entire instrumental tradition known as taonga pūoro, which invokes the sounds of the environment to create music used for ceremony, communication and rongoā, also fell under the remit of the Act, which remained in place until 1962. The practice of taonga pūoro was eventually revived in a movement led by Hirini Melbourne, Richard Nunns and Brian Flintoff in the late 20th century. Practitioners can now be found across Aotearoa, working in a range of fields including health and wellbeing, recording, ceremony, and live performance.

These instruments of sound, music, and healing from te ao Māori include flute-like instruments made from wood, bone and stone — like the kōauau and pūtōrino. Found instruments such as stone tumutumu, which mimic the heart beat of Papatūānuku, and trumpet sounding instruments such as the pūkāea and pūtātara, which create a resonant chamber from shell, are also used in the practice. These objects are treasures that assure us of our whakapapa to our tūrangawaewae; they contain the stories of our ancestors and atua, allowing us to communicate with our natural landscape as it changes.

I have been privileged to work with taonga puoro in my work as a Māori music therapist and performer. As part of the tradition, I’ve been mentored by many senior taonga pūoro practitioners including fellow Kāi Tahu practitioner, Ariana Tikao, a taonga pūoro musician, singer and 2020 Arts Foundation Laureate. She lives in Te Whanganui-a-Tara/ Wellington. Her recently released album with Al Fraser Nau Mai e Kā Hua is a series of waiata featuring taonga pūoro and vocals which examine kōrero around water, land, and whānau. Together we are part of the female taonga pūoro quartet Maianginui, who I have composed for in collaboration with the Auckland Philharmonia — a project that brings together taonga puoro and Western instruments to tell the story from Māori mythology of Tinirau and Kae, through the female lens.

Ariana and I sat down to discuss our relationship with the practice of taonga pūoro, and how it helps us maintain our relationships to Te Waipounamu, the South Island, where we are both from.

Ariana Tikao: I studied the practice’s revival when I was doing my degree in museum studies, so I was interested in taonga pūoro at that time as part of the decolonisation movement. In 2000, I met Richard Nunns and Hirini Melbourne at a workshop and afterward began working with Richard. At that point I didn’t consider myself a player [of taonga pūoro]. I brought Richard in to support my recordings, such as my 2002 album, Whaea, and for live performances. After that, I met Brian and he got me into playing, and Richard started mentoring me. I have Brian to thank for teaching me basic techniques and introducing me to my whanau of taonga. It’s just kind of blossomed from there and become more and more of an obsession, and a big part of my identity.

Ruby Solly: My early experiences were with Richard too, but a generation on — I remember watching him play with Whirimako Black when I was about 13 and just being struck by how jazz and te ao Māori could come together so seamlessly through taonga pūoro. I was lucky to have taonga puoro around me when I was in early primary school, where we were taught to play kōauau. I didn’t have access to instruments again after that until university, but what I did have was the knowledge that pūoro teaches you to interact with sound in the environment. Is this something that’s part of your experience too?

A: Usually I’ll have an instrument with me when I’m out walking in nature. I often play when I’m just out there experiencing the environment as part of my interaction with te taiao, and also relating to rongoā and the work that I’ve been doing in the Māori healing space. It’s exciting to see more people within the rongoa community getting into playing as well, and making their own taonga pūoro to use in that healing realm, rather than just within music or in the public sphere.

Mauri — life force or vital essence
of a person or object

R: It’s a beautiful space to work in, I love how in te ao Māori our definition of rongoā is deep enough to include experiences like taonga pūoro. I remember the first time I went to one of the beaches of our iwi at Waihao, and finding all these perfect flat stones that could fit in the palm of my hand, which were perfect for tumutumu, then finding out later that the information we have about tumutumu in te ao tawhito comes from our Waitaha kaumatua. So you can see where our music comes from our landscape within that passing of knowledge. Do you have any taoka that you have that relationship with?

A: I have some tumutumu from Birdling’s Flat which is near Wairewa, one of my marae. We had a taonga pūoro wānanga there in about 2011 and I picked up these little tumutumu that are some of my favourites. I visited Te Papa when we first moved to Wellington, and I was talking to a kaumātua there, showing him those tumutumu and telling him where they came from. It was really beautiful — he talked about the journey of the rocks to turn into these tumutumu and how it would have taken thousands of years for them to wash down from the mountains to the sea where I picked them up. He talked about the mauri of those stones that’s now with me when I hold them, and that perspective made me appreciate them even more. There’s also my pahu pounamu. The kōhatu originally came from the Arahura on the West Coast. Russell Beck, who was a carver who lived down at Murihiku, made that for me and when I received her I called her “Te Iriraki o Waitaiki” to link back into that korero of the origin of pounamu. When I was down there for Aoraki Bound (an Outward Bound programme with a Kāi Tahu emphasis), we went to the source of pounamu in the Waitaiki Stream, and we did karanga for Waitaiki where she comes out into the Arahura River which was really special. I think all of those experiences intensify the relationship and become part of your own story.

R: There’s that importance too of noting that the whakapapa of the instrument doesn’t begin when you receive it, it starts far before that. I think it makes you look at and appreciate resources in a different way, especially when they’re personified like that. On your recent album Nau Mau e Kā Hua with Al Fraser, you have a track focusing on the whakapapa of water within Te Waipounamu, can you tell me about that?

A: It’s called, “Te Reo o Te Wai”. When I was on Aoraki Bound last March, we did this trip starting at the top of the South Island and went to places that were significant to Kāi Tahu history, including Aoraki. During lockdown I was researching water for another project I’m doing with Louise Pōtiki Bryant called Te Taki o Te Ua, which got me thinking about the journey of water down from Aoraki mauka to the sea. When we were up there, you could hear the rumble of the ice as it comes off the mountain. It’s quite cool to have that sonic memory and experience.

R: It’s interesting thinking of the water itself being the song. I remember talking to Warren Maxwell from the band Trinity Roots about his residency in Antarctica using ridgelines and landscapes as a gradient for your rangi. I’ve done it with Aoraki before and it’s this beautiful way of almost playing the same song from different angles as you move around the mountain. There’s so many levels you can take from this; you can play the water flowing down the mountain, and you can play the overall structure, and you can use the rocks that roll down the mountain to become tumutumu so you’re physically playing the environment. It really highlights the way we use our resources in a way that upholds their mana.

A: Often for the wooden taonga too, they are made from recycled wood that would have been waste or fire wood, and it’s able to be made into a taoka that potentially might be passed on to the next generations. Also with bird bones and feathers from birds dying naturally, it gives them a life beyond their physical existence.

R: Sort of a way of extending their whakapapa?

A: Yeah, in most cases it feels like an honouring of that life and of the materials they become.

R: There’s a real level of consciousness around how we use these resources, too, since we link back to the places that they come from.

A: I’ve been thinking a lot about the climate crisis and how that may impact taonga pūoro in terms of what resources will be available in the future, but also thinking about what part we may have to play in creating awareness around environmental issues.

R: Especially in how we transcribe so much of our music and knowledge from the landscape, and if that landscape is changing, will the new players still be learning from the same sounds within the environment? I wonder too, does it feel different when you’re playing in Te Waipounamu as opposed to elsewhere? For me there’s a sense of knowing that all the manu, whenua, plant life, etc, have been part of the lives of our ancestors who were here. Acknowledging the idea that there are multiple strands of whakapapa within that one place.

A: Yeah — I’m looking forward to doing the Banks Penninsula track and being immersed in that landscape again. Last time we did it, 10 years ago, there was this grove of ngahere that just seemed untouched, with heaps of fantails in that area, and it felt like what you were describing; this condensed moment where you could imagine your tīpuna experiencing those same things that you are. 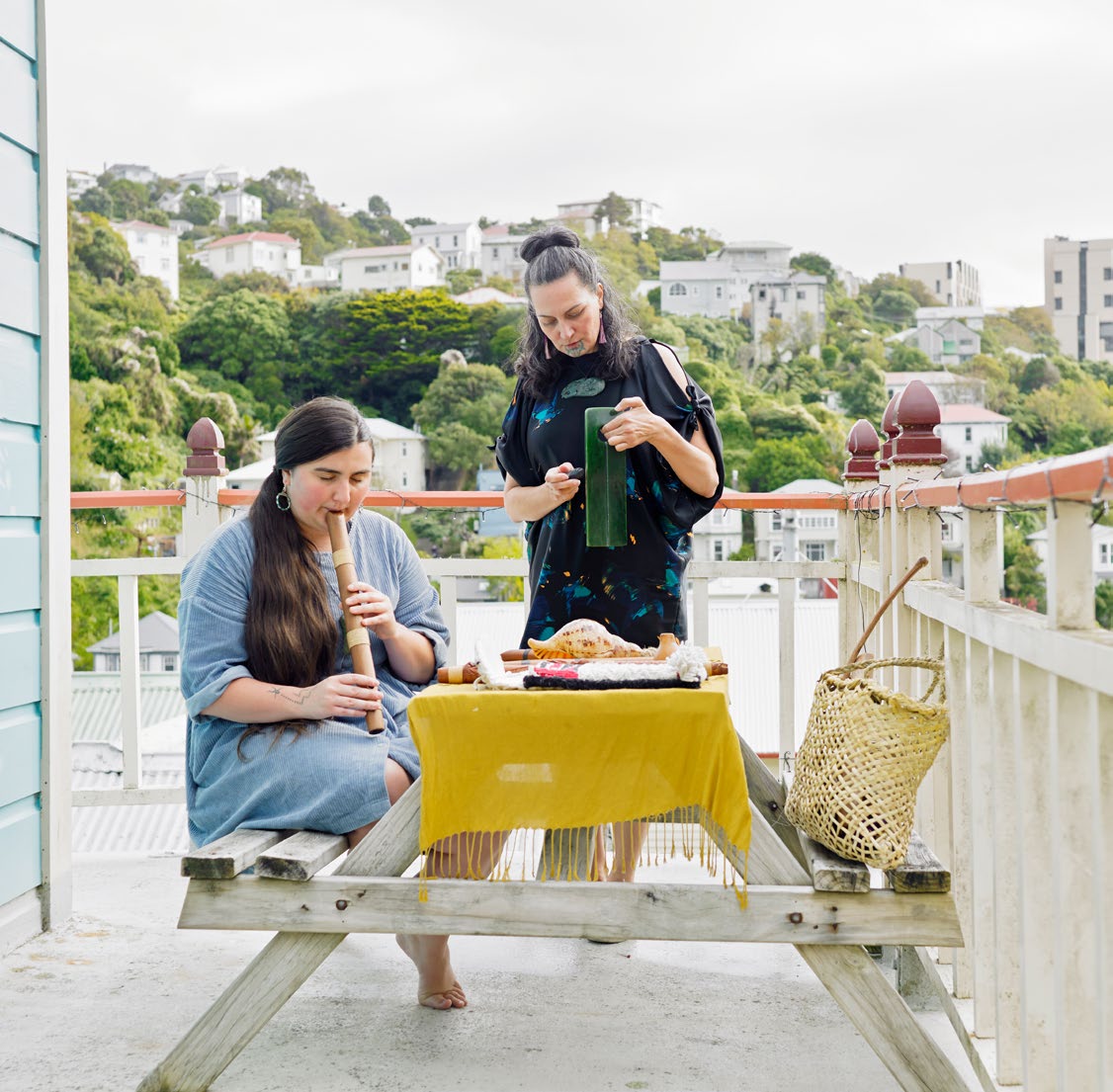 Ruby Solly (Kāi Tahu, Kāti Māmoe, Waitaha) is a writer, musician and music therapist living in Pōneke/ Wellington. Her first album Pōneke was released in 2020 and her first book Tōku Pāpā was released by Victoria University Press in February 2021.