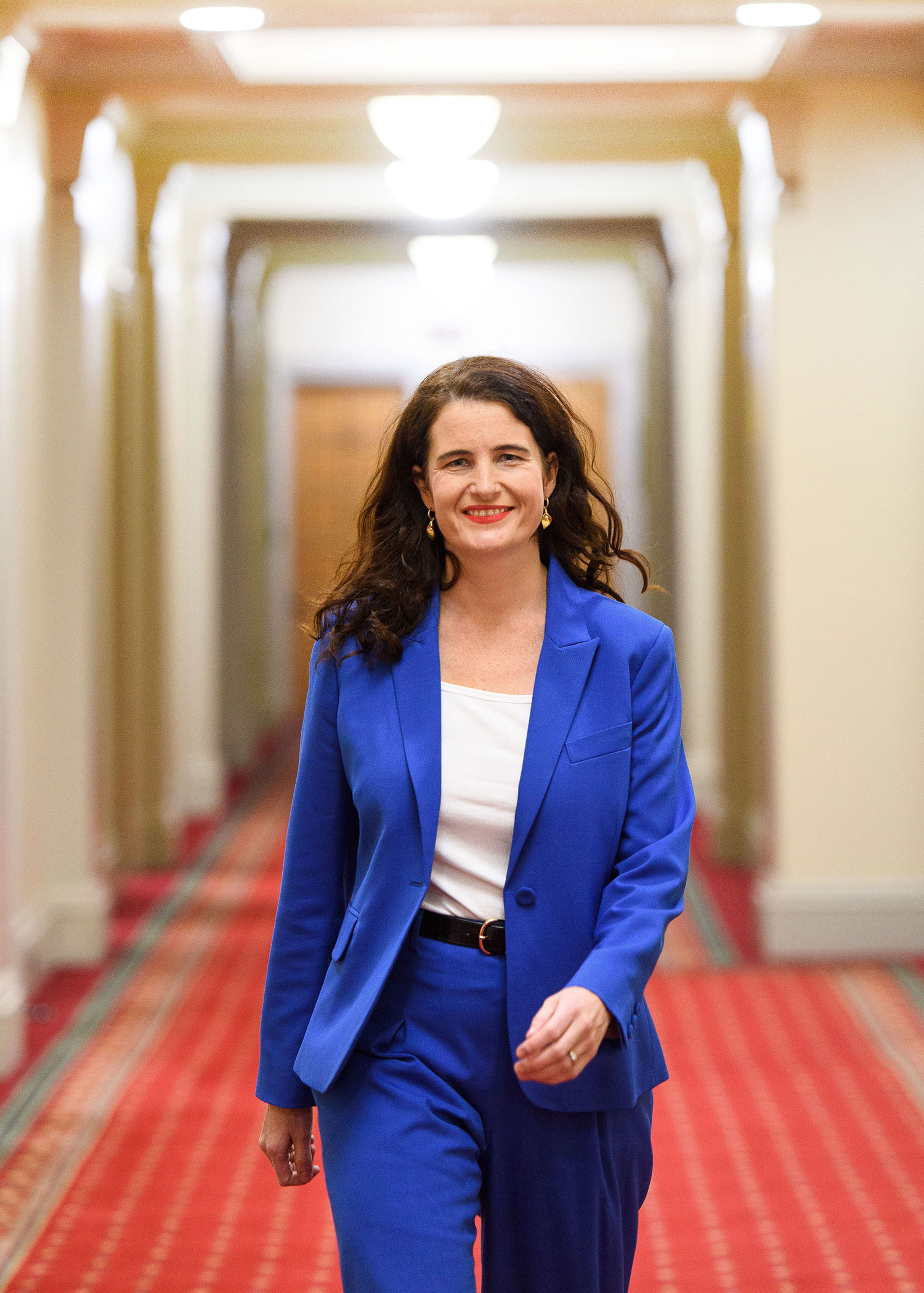 National’s housing spokesperson Nicola Willis spent the morning of 14 April fighting people on Twitter. Her party had proposed a new bill aimed at increasing housing supply and Willis was going after her critics one by one. “Sue, with all respect [you’re] completely wrong,” she told former Labour MP Sue Moroney, who said the proposal raised spectres of the deregulation that fuelled the 1990s leaky homes crisis. “Seriously, read the bill,” she advised left-leaning Auckland councillor Richard Hills, who worried it would punish councils like his own, which is already issuing a record number of consents.

Social media can be a brutal arena for right-leaning politicians. But in this case, something unusual happened: Willis started finding supporters on the left. “National [is] pretty much getting things right on housing. If some left commentators truly cared about the causes they said they did, they’d push the government and Greens to work with National on [its] proposals,” said the economist and Green Party member Sam Warburton. “The instinctive opposition to this is weird,” said Francis McRae, a pseudonymous urbanist who advocates for high-density housing and pedestrianised streets. “This is a good idea.”

Willis is only 40 years old, and highly present online for an MP. But in person she comes across as a polished, almost cautious, politician. She has an inexhaustible supply of prepped lines that are both on-message yet personal enough to be humanising. (“I had an incredible mum and dad, great education, great opportunities in life, and I’ve always been really conscious that not everyone gets that, and I feel a particular responsibility to give back,” she says, to explain her passion for the housing portfolio.)

Her political back story is equally conventional, almost a template for a traditional National Party MP. Her mum, a radio reporter for Avon Pacific News, was in the parliamentary press gallery. Willis was an executive at Fonterra and a speech writer for Prime Minister John Key before finding her way into Parliament, filling the seat vacated when Steven Joyce resigned in 2018. Her big break came in May last year, when she reportedly helped Todd Muller roll Simon Bridges as party leader. Muller lifted her 31 places up the list and gave her the housing portfolio.

Since then, Willis has steered National in an increasingly ambitious direction when it comes to reducing the housing shortage that’s fuelling Aotearoa’s spiralling property and rental prices. Going into the 2020 general election, National leader Judith Collins’ most common response to the question of how to fix the country’s 100,000-home shortfall was to point to distant Resource Management Act reform. The Housing Emergency Response (Urgent Measures) Bill that Willis defended on Twitter would make a more immediate impact, forcing local authorities to rezone land for 30 years’ worth of housing. It would pay them for being more aspirational than in the past — local authorities would get $50,000 for every dwelling they consent above their five-year averages — and limit people’s ability to appeal zoning changes. The bill is essentially a sped-up version of Labour’s National Policy Statement on Urban Development Capacity (NPS-UD), which requires councils to zone for six-storey buildings around rapid-transport hubs, but won’t take take full effect until 2024. Both parties say they want additional houses. National just wants more, and faster.

In a conversation at the Federal Delicatessen in central Auckland, Willis tells me that she owns a house but is “very worried” about the impact that rising property prices will have on the lives of her four children, who are aged between five and 11. “I’m also really worried about younger New Zealanders. Increasingly when I speak to them, they say, ‘I’ve given up on home ownership’,” she says. “I would love to be a housing minister that actually does some substantive things to transform New Zealand’s housing market; that would allow me to look my kids in the eye and say, ‘I made a difference.’”

There’s also some political savvy at play. Taking a progressive stance on housing supply isn’t just popular among lefties on Twitter. It presents National as a viable option to some of the more liberal swing voters that used to support former Prime Minister John Key. National needs to win them back if it hopes to return to power, says Ben Thomas, who worked as a communications advisor in Key’s government. He has a description for the type of voter he has in mind: middle-aged, middle-class women who voted for Helen Clark under Labour, then switched to Key, then again to Ardern. “National’s focus has to be on what we called the ‘John Key women’,” he says. “[For that,] you do have to be able to present urban liberal credentials, and you do have to be able to take centrist ground.”

By coming off as mostly competent and constructive, Willis is staking a claim to a patch of that lost ground. But her forays into Labour territory remain a rarity in the National caucus. Several of its more liberal MPs were wiped out in last year’s election bloodbath. Many in the remaining caucus lean to the conservative and tend to play to the party’s base. (On the day the housing emergency bill was announced, customs spokesperson Simon O’Connor posted a Facebook status mocking kapa haka competitions in prisons.) Thomas says Willis has proved effective mainly by sticking to the basics: knowing her portfolio, and coming up with genuine ideas for improvements. One political gallery reporter attributes that to her work ethic. She has asked 947 written questions in the current term of Parliament. In the same time, Helensville MP Chris Penk has asked 128.

Neale Jones, a former chief of staff to Jacinda Ardern, says Labour would be wise to take a leaf out of Key’s playbook and adopt Willis’ policy ideas as its own. “If I were the government, I would very quickly move to bring forward the NPS-UD,” he says. “Sure, National could crow in the media for a few days and say, ‘Look at us; we’ve caused this’ but ultimately the worst thing that could happen to National is the government moving decisively in this area. It removes an area where they can attack them.”

A former adviser to Jacinda Ardern says Labour would be wise to adopt Willis’s policy ideas.

That’s not to say Willis is always lining up with the left. National has consistently sided with the landlord lobby against moves to tax property investors or introduce healthy homes standards for rentals. On the day she spoke to North & South, Willis had to duck out to be interviewed by Newstalk ZB’s Kerre McIvor about a dispute she was having with Marama Davidson. Willis had said she didn’t feel safe walking in central Wellington after dark, blaming those fears on an explosion of emergency housing. The Green Party co-leader accused her of advancing racist and classist narratives.

Willis insists she didn’t intend to stigmatise people in emergency housing. “What I’m saying is I blame emergency housing as being the wrong solution for these people. It’s not their fault. The right solution is supported, appropriate tenancies,” she says. Still, she’s scornful of the idea of imposing government controls on the rent rises that have made those people so desperate, saying that increasing housing supply is the only lasting solution. “If you want to solve these problems in an enduring way, you can fuck around with rent controls and try and do all sorts of things but ultimately you have to increase the supply of houses so landlords feel they’re competing for tenants rather than the other way round,” she says.

National’s credibility as an alternative government rests in part on whether Willis can sell that argument, and the policy it entails. It can sometimes feel like she’s fighting her own colleagues in that effort. On the week she and Collins championed the housing emergency bill, National’s deputy leader Shane Reti was criticising Kāinga Ora for demolishing a 95-year-old house to make way for a 37-home development on Puriri Park Road, Whangarei. Last year, Hamilton MP David Bennett launched a petition against a 70-house Kāinga Ora development in the suburb of Flagstaff.

Willis says National’s caucus is united behind her progressive approach to housing supply. “I want to say I have Judith Collins right behind me. I have a lot of National Party members who say, ‘You go for it; we’re right behind this’,” she says. That rings true. But nimbys like those in Whangarei and Hamilton are a tempting reservoir of votes and some MPs still publicly sympathise with their concerns. And with the party dipping to 23 per cent in the latest Roy Morgan poll, rumblings are echoing around the media about who will replace Collins as leader. If National’s leadership were to change, so could the people shaping its housing policy. Willis has Collins onside, that much is certain. But it wouldn’t hurt for her to have a talk about housing with Christopher Luxon.

Hayden Donnell is a producer on Radio New Zealand’s Mediawatch.