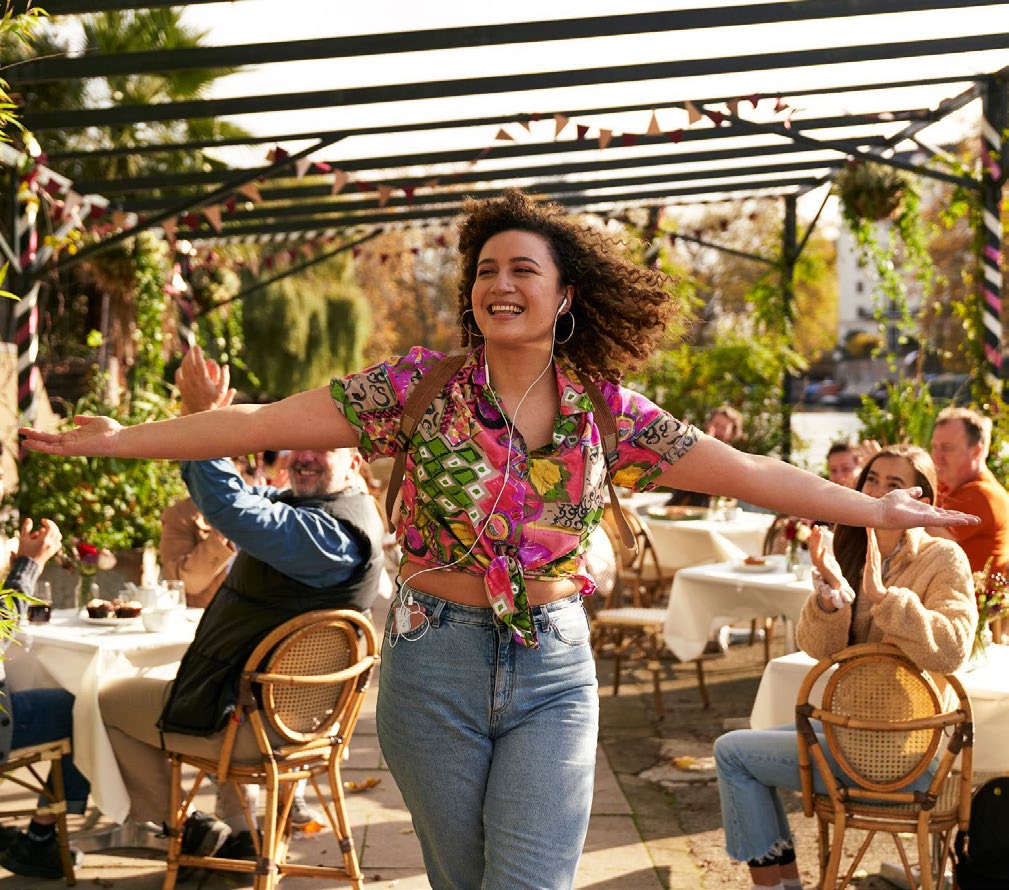 Above: Rose Matafeo as Jessie in her new show Starstruck. Photo: Mark Johnson.

Comedian Rose Matafeo on the value and constraints of diversity on screen and her “accidentally feminist” new BBC-produced TV show, Starstruck.

When Rose Matafeo won the top prize at the Edinburgh Fringe Comedy Festival in 2018, she was just the fifth woman and the only person of colour to win the award for a solo show in its 37 year-history. She was widely praised for the win, especially in New Zealand, where one of our own achieving on the international stage immediately activates our latent patriotism. But to Matafeo, instances where the praise seemed contingent on that “first” or “fifth” chafed. The comedian is ambivalent about relating her success to anything beyond her comedic capabilities.

“It’s interesting when your identity is used as a virtue signal,” she says. “[It’s] basically used at other people’s convenience depending on how people want to categorise you. When you’re a brown person, or a woman, not everything has to be about that thing.”

Matafeo is a self-described nerd who loves screwball comedies and old musicals (she recently purchased a tiny, second-hand 90s-era television with a built-in VCR so she could watch some old VHS tapes of Disney films she found in a bag on the street), and she has recounted an eclectic list of comedic influences over the years: Rock Hudson, Doris Day, Gabe Kaplan, Tina Fey, Jerry Seinfeld, Rick Moranis and Steve Martin. Her comedy work and influences are very much not about “that thing”.

I’m talking to Matafeo ahead of the release of her new show, Starstruck, a six-part romanticcomedy series set in London. Commissioned by BBC Three, it’s streaming now on TVNZ On Demand. The show follows the burgeoning relationship between Jessie (played by Matafeo) and Tom (played by the British-Indian actor Nikesh Patel).

A love story featuring a Sāmoan woman and Indian man in London — it’s tempting to think there’s a statement in there. But Matafeo disagrees. “The show is written so those characters could be played by actors of any race, it’s a love story. There’s a universality to that,” she says. Equally though, she admits there was no reason why nearly every romantic comedy in the 1990s and early 2000s (arguably the defining era of the genre) had to star two white people. Viewers who weren’t white had to work harder to see how the stories applied to their own experiences — she would know, she was one of them.

She concedes it’s refreshing to now make and watch things with more diverse characters. As we’re talking, I am struck by the tension of rejecting the impact of identity on creative processes on the one hand, while on the other, admitting that identity does touch everything, even if not explicitly.

“When you’re a brown person, or a woman, not everything has to be about that thing.” 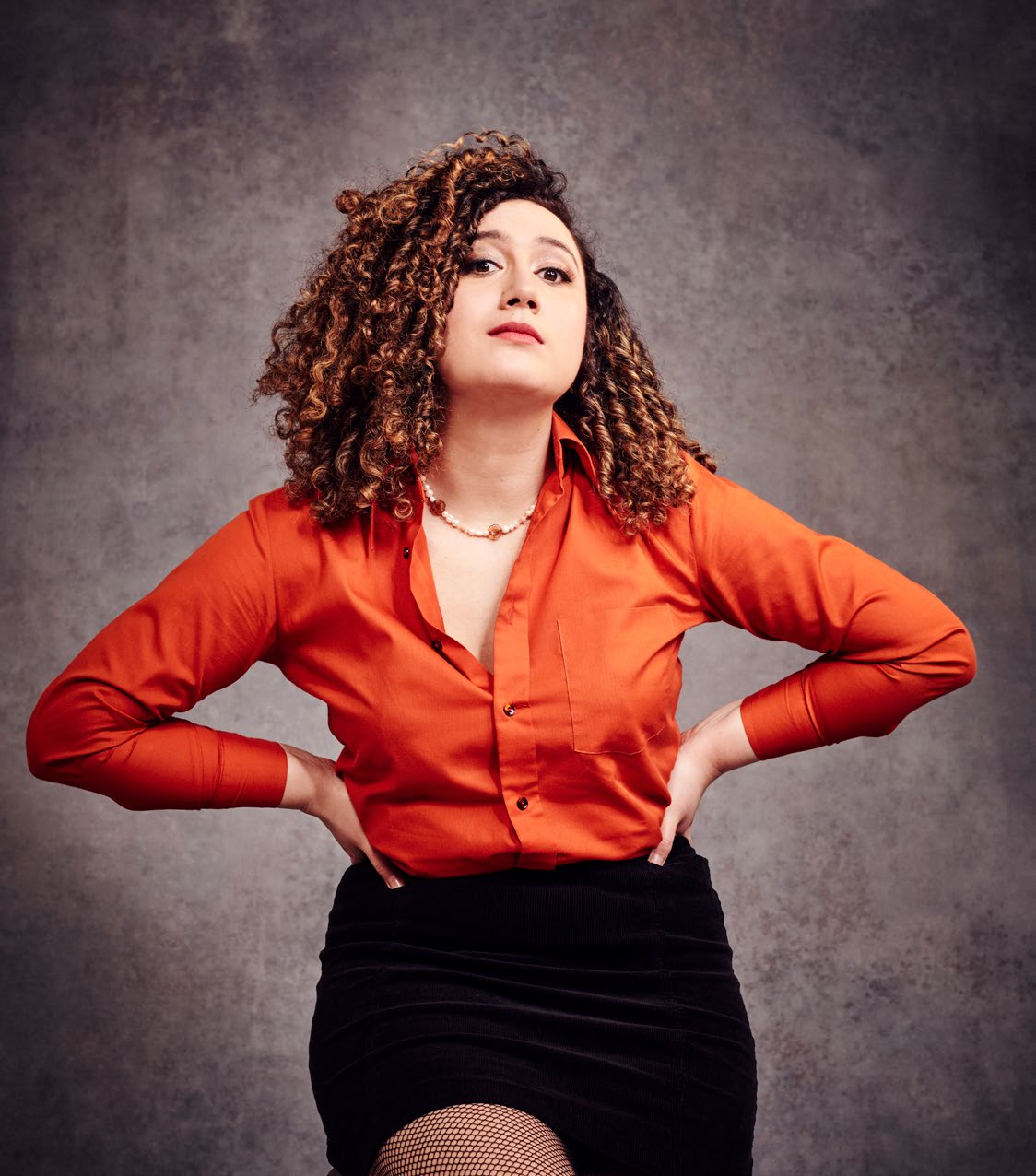 Matafeo and her two older brothers were raised in Auckland by Rastafarian parents — her dad is Samoan and her mum is of Croatian and Scottish heritage. She started stand-up comedy as a teenager, and at 19 she hosted the show U-Live on TVNZ. It was canned two-and-ahalf years later, but is considered to have been something of a hub for young talent at the time. One of Matafeo’s co-hosts, TV presenter Tim Lambourne, says it was during filming for U-Live that he realised she was going to be a star. Describing a bit of improvisational comedy she did using a road cone they found on set, he recalls it as “the funniest thing I had seen in my life”.

Since then, Matafeo has written extensively for TV, starred in the sketch show Funny Girls which she co-created, is a regular feature on TV shows in the UK such as Richard Osman’s House of Games and Taskmaster, and played the lead in the silly and sweet New Zealand comedy feature, Baby Done, which was executive-produced by Taika Waititi. Horndog was also picked up by HBO Max. Not bad for someone who turned 29 earlier this year.

Before I join our early morning Zoom call, I feel acutely aware of the fact I’m about to speak to my former head girl, despite the fact it’s been more than a decade since we both finished at Auckland Girls Grammar. Of course, I remember her well. Matafeo was (or at least appeared to be) effortlessly smart, and was pretty quirky, carrying a black leather briefcase to school every day instead of a backpack. My biggest fear was that she wouldn’t recognise me — those old familiar feelings of inadequacy rush in, of being the unmistakeably average kid about to talk to the high achiever. Matafeo picks up the call from her London home with a knowing, “Hey Lana!”. Phew. Then she adds: “You’re the first New Zealander I’ve spoken to who has seen the new show, which is weird.” I take that as a compliment.

Starstruck opens with a one- night stand on New Year’s Eve — Jessie, a regular person, has slept with Tom, a famous actor. The tone of the show is set when Jessie leaves Tom’s apartment and immediately encounters a street lined with paparazzi — only for the paparazzi to say it’s a false alarm: she must be the cleaner. It’s a fun, cute watch Matafeo has described as a “reverse Notting Hill”, and it doesn’t take long to become fully invested in the lead characters’ relationship.

Matafeo is quick to say that Jessie is not based on her own life — and to clarify that she has never had a one-night stand with a celebrity. In explaining the distinction between herself and her character, Matafeo describes Jessie as her “evil version”. The description is interesting. Jessie is hardly evil — but she is extremely confident. There’s a sense that Matafeo finds comfort in a bit of self-loathing. At the very least, in real life she’s drawn to it. “I’ve never met anyone very interesting who is really confident.”

Ideas around confidence have influenced Matafeo’s comedy since she first started performing as a teenager, when she thought the idea of being a “confident teen” onstage would be “unfunny and try-hard” so she “went with the self-deprecation thing”, which stuck. Matafeo tells me now that she has a “weird mix of low self-esteem and high ambition”. “I’m wildly ambitious, and I sort of have a delusional confidence that I’ll be able to achieve what I want to achieve if I work hard enough.” Old interview footage shows a 21-yearold Matafeo telling the camera that one day she’ll win an Oscar, write a TV show, write a movie — that she’s going to do it all. At the same time though, Matafeo says she thinks she’s “a piece of shit”.

Perhaps this hasn’t been helped by more than half a lifetime spent on the stand-up circuit. From the outside, New Zealand has a somewhat contradictory relationship with comedy. We have international comedic successes (think Flight of the Conchords, Taika Waititi, Rhys Darby) a thriving local comedy scene and a well-formed deadpan national sense of humour. Yet New Zealand’s tendency to self-deprecation can make it difficult for us to relax enough to have a laugh. We are a notoriously hard audience for comedians. Angela Dravid, an Auckland comedian on the rise, has suggested that “we are afraid of laughing in comedy shows”. This tendency is part of why Matafeo moved to the United Kingdom, which also offered a more substantial comedic infrastructure, with bigger audiences and more opportunities to gig “People here like British comedians, you know,” she says. “In New Zealand people barely like New Zealand comedians and that’s a real attitude.”

There is something kind of high school-esque about how hard Matafeo is on herself, as if those voices saying, “Oh, you think you’re cool” or “Oh, you think you’re funny” live as little devils on her shoulders. On New Zealand comedian James Nokise’s podcast, Eating Fried Chicken in the Shower, Matafeo observed that her critical voice has at times grown louder than the inner voice defending her. “You fall into these patterns and habits that whenever you have a positive thought about yourself you constantly piggyback it with criticism.”

Perhaps that inner critic is what feeds success. Matafeo sees the comedian’s job as accurately assessing your own and others’ behaviour so you can create commentary on it. But it also feels relentless for someone who could be basking in the glow of their accomplishments.

I’m struck by the tension of Matafeo rejecting the impact of identity on creative processes on the one hand, while on the other, admitting that identity does touch everything.

After living and working in the UK on and off since 2015, where she “did some stuff” (a successful run of comedy shows and television appearances), she began pitching her own television projects. After having a number of pitches rejected, on the plane from London to New Zealand, Matafeo came up with the idea for Starstruck, writing a one-page outline of the show which ended up being commissioned by the BBC for a pilot in 2018, which turned into a season. The show has also been picked up by HBO Max.

In the first episode of Starstruck, Jessie and Tom have very open (and funny) conversations around consent and period sex both before and while engaging in sex themselves. The topics are approached in a way that feels natural to both the characters and the storylines. This is perhaps because Matafeo included them not to make a feminist statement, but because for her generation and among her friends there is nothing strange about having that kind of chat. “I never go in with those intentions,” she says. “I just have my own principles and thoughts and everything I do goes through that.” Watching the show, it feels as though the work, and by extension the audiences, are benefiting from a world in which these subjects have been normalised. This approach makes the work perhaps “accidentally feminist” she says. “I would say there is a lot of feminism in the work, to the ire of some,” she jokes.

And yet while Matafeo confidently acknowledges the gendered politics of the work, she skirts around its racial politics. This is despite being on the receiving end of racist jokes in the past, such as during her appearance on Jimmy Carr’s Roast Battle on Comedy Central in 2018, when fellow comedian Naz Osmanoglu joked that Matafeo’s Sāmoan heritage made her violent, uncivilised, and someone who wears a “grass skirt”. Matafeo quipped back that “It’s so refreshing to see a straight, white man not succeed in comedy right now.” (Osmanoglu is Anglo-Turkish.) Looking back on it now, she tells me that just being herself can be read as political by others. All these layers of her identity, having other people’s perceptions put on her can get quite overwhelming, she says. “So many things can impede your ability to make and create and that sucks.” This is a conversation I have had countless times with other creatives who have particular identity markers. It’s an incredibly specific difficulty that many struggle with constantly. From where I’m sitting, it feels as though Matafeo has come out from under the weight of that burden.

When I ask what the intention of Starstruck was, she tells me that she just wanted to create the romcom that she would have loved to have watched herself, something warm and genuinely joyous. That in itself is an infiltration of a system, normalising a world in which a brown woman of mixed heritage creates something which appears to tick all of the diversity boxes — “not just for the university prospectus”, as she puts it, but because this is what the world looks like.

Lana Lopesi is a writer based in Tamaki Makaurau.