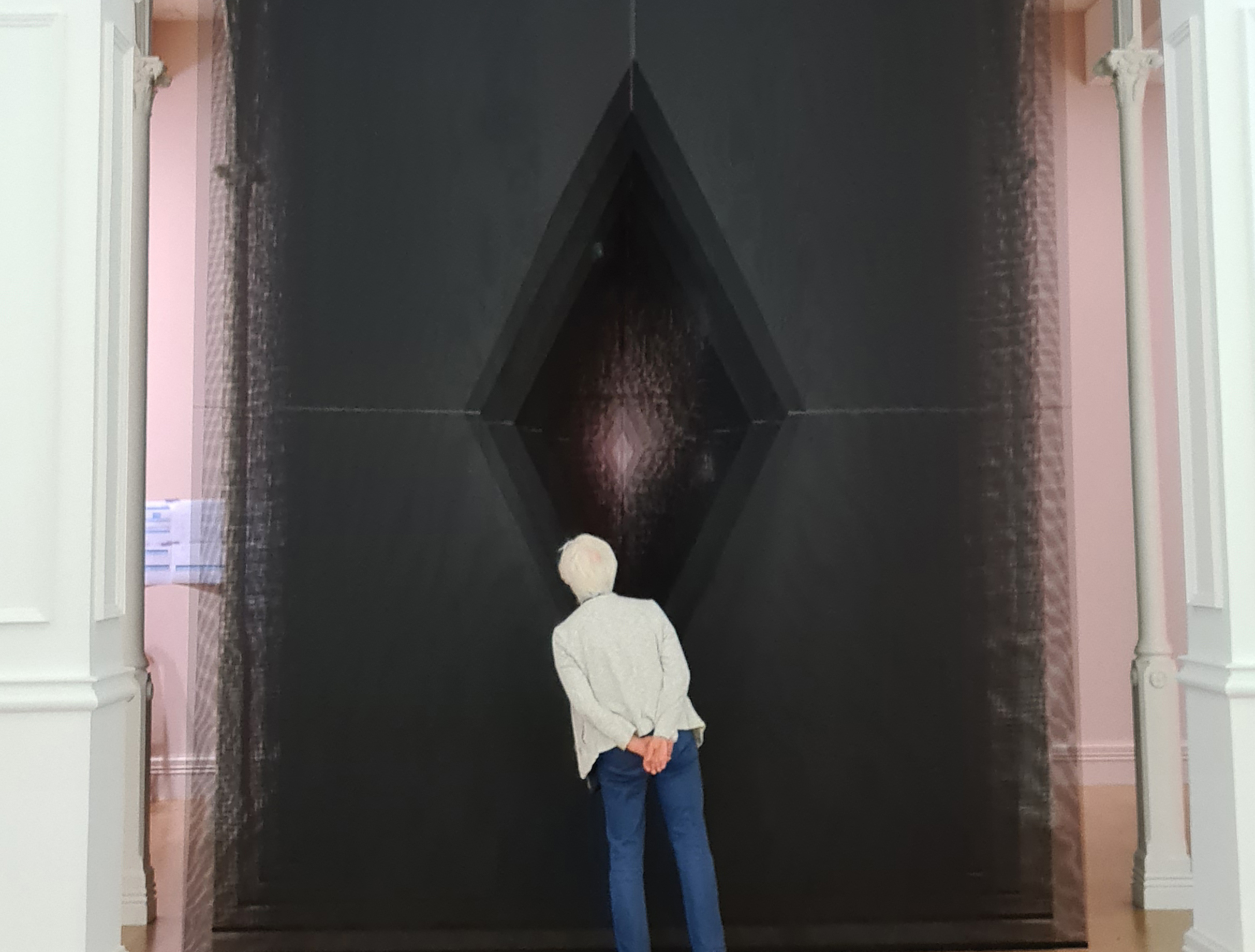 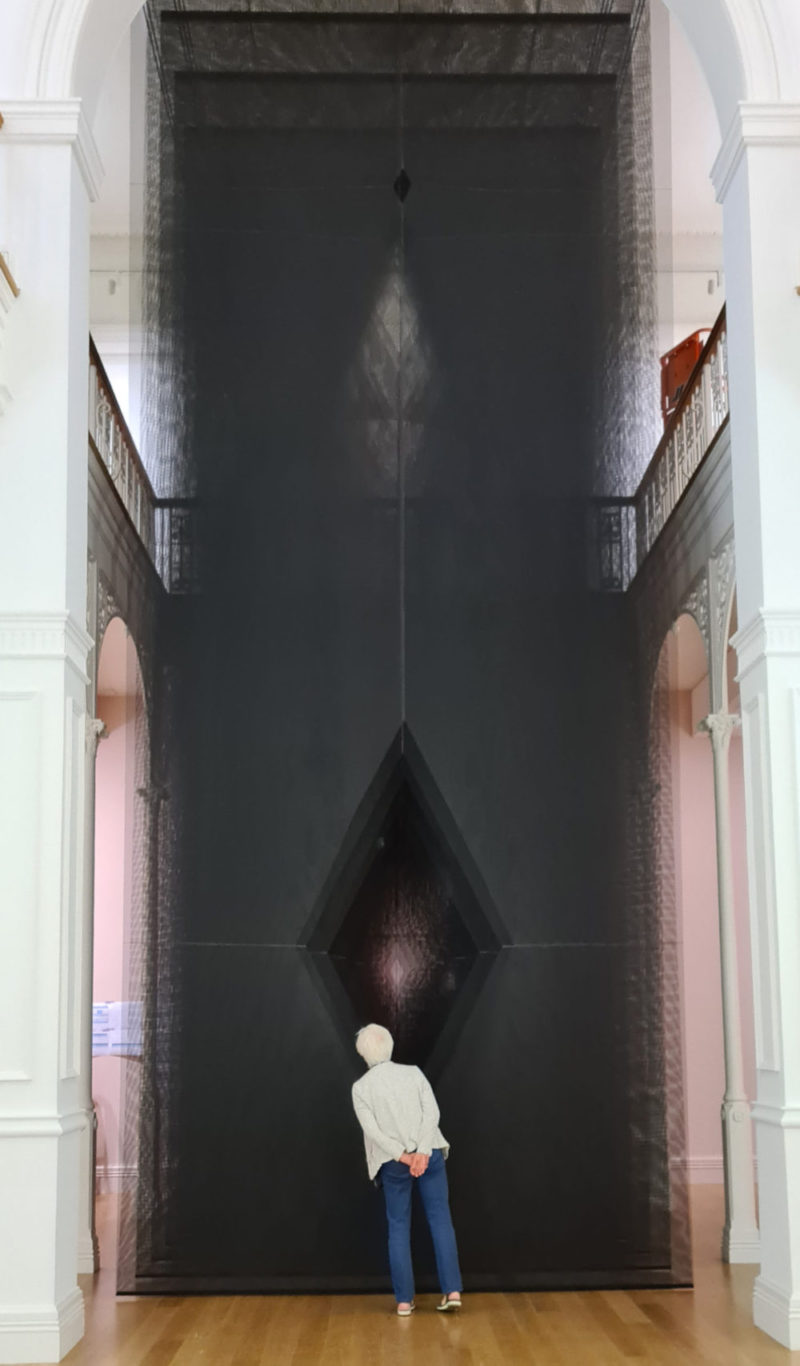 Above: Installation of Atapō, 2020 by Maureen Lander and Mata Aho Collective at Auckland Art Gallery Toi o Tāmaki. Image courtesy of the artists

Last weekend was the hura kōhatu for my eldest cousin, Hone Te Ihi o Te Rangi Ngata aka DJ Poroufessor aka Hone Paku (Ngāti Porou, Ngāti Ranginui, Ngāi Te Rangi). Hone Paku’s headstone stands a few rows over from my dad’s at Taumatawhioi Urupā, a west-facing hill cemetery that can be seen from the back of Wairoa marae in Tauranga Moana. Hone Paku was the first artist I knew to travel overseas and work with our taonga.

The most I remember from my cousin’s time away in the early 90s was that he brought back Chicago Bulls jerseys for my siblings and I, and that he gave Mum a tin in the shape of the Field Museum of Chicago. The roof came off to reveal inside the white fossil of a fern wrapped up in soft tissue of the same colour. It smelt old. The fossil always had to be wrapped back up in the tissue and put in its tin house and placed back on the bookshelf.

It lived between an obviously pre- internet book which taught you How To Do Just About Anything and a book about the New Zealand surgeon who, prior to operating on my brother’s heart when he was a baby, had practised on sheep. I remember being quite fascinated by this little tin building — the likes of which I hadn’t seen before.

In 1992, Hone worked inside the full-sized version of that tin house — the Field Museum. Alongside the late Hinemoa Hilliard (Ngāti Kahu, Ngāpuhi), and with co-curators John Terrell and Arapata Hakiwai (Ngāti Kahungunu, Rongowhakaata, Ngāti Porou, Ngāi Tahu), he was restoring Ruatepupuke — a beautiful whare whakairo from Tokomaru Bay that had been in the Chicago museum since 1905. Conversations around the proper installation of this carved ancestral house were initiated in 1974 with Sir Hirini Moko Mead (Ngāti Awa, Ngāti Tūwharetoa, Tūhourangi), but it wasn’t till 1986 that people from Tokomaru Bay saw, touched and no doubt wept with Ruatepupuke at the close of the seminal exhibition Te Maori which, as it travelled throughout the United States in 1984 to 1986, was accompanied by a 90-strong contingent of kaumātua and cultural practitioners. Te Maori set many precedents around exhibiting taonga, most notably the necessity for Māori involvement at every level. This is an aspect many Māori continue to work towards and achieve in small pockets throughout Aotearoa today.

The works within the exhibition can be defined as contemporary because we make them today. They are a result of our everyday lived experience of being Māori.

Opening at the Metropolitan Museum of Art in New York and finishing at the Field Museum, Te Maori’s international success was a timely support for the continued Māori struggle for legal cultural recognition back home in Aotearoa. Te Maori, with the added title of Te Hokinga Mai: The Return Home, toured throughout Aotearoa in 1987, the same year te reo Māori would finally, after decades of petitions and protest, become an official language of New Zealand.

Māori art is very rarely made, shown, written about or collected in a vacuum. It offers points of connection to a multiplicity of people and places. It moves across disciplines and through time, resisting essentialist definitions for the right to make into the future while being informed by our past. There is a well-known photograph from 1987 of Auckland Art Gallery staff sitting on the floor, waiting for Te Māori: Hokinga Mai to open. On 4 December 2020 Toi Tū Toi Ora: Contemporary Māori Art, an exhibition of over 100 Māori artists, opened in the same gallery. It is the largest exhibition in the gallery’s history, with the curator of Māori art, Nigel Borell (Ngāti Ranginui, Ngāi Te Rangi) steering the helm of the waka. The works within the exhibition include weaving, carving, painting, installation, sculpture, adornment, photography and moving image, and can be defined as contemporary because we make them today. They are a result of our everyday lived experience of being Māori. As diverse as that experience is, so are the modes of expression.

This is only one of several exhibitions by Māori artists around the same time. On 5 December, a significant solo exhibition by Dr Brett Graham (Ngāti Kōroki Kahukura, Tainui) Tai Moana Tai Tangata opened at the Govett- Brewster Gallery in New Plymouth, curated by Anna-Marie White (Te Ātiawa). The exhibition of monumental structures and short films traces events and locations in Tainui and Taranaki Māori histories. His large sculptural works track the colonial process by highlighting histories and current-day effects on landscapes. Accompanying the exhibition is a long-awaited publication on the artist’s practice.

We make art among our most loyal supporters and our harshest critics — our whānau.

I spent late November at Auckland Art Gallery Toi o Tāmaki installing the commissioned artwork Atapō with Dr Maureen Lander (Ngāpuhi, Te Hikutu) and Mata Aho Collective (Ngāti Awa, Ngāti Kahungunu ki Wairarapa, Ngāti Ranginui, Rangitāne, Ngāi Te Rangi, Ngāti Toa Rangatira, Ngāi Tūhoe, Te Ātiawa ki Whakarongotai), of which I am one member of four. We were privileged to collaborate on a new work with our mentor, Maureen, a practising artist for over 40 years and the first Māori to get a PhD in fine arts — but definitely not the last. This collaborative piece was one of two Maureen worked on in this year of change; she also completed a large-scale commission for the Waitohi Johnsonville Library and Community Hub, Whetūrangi with local Wellington weavers Te Roopu Raranga o Manaia. The title of our piece, Atapō, can be translated to mean “before dawn”. It makes poetic reference to the transition of Hine-tītama, the personification of dawn, to that of Hine-nui-te-pō, the custodian of souls. Using insect mesh, wool, and muka, the work echoes the voices of Māori women authors, artists and academics who have recalled the empowering significance of this narrative from the perspective of wāhine Māori. In October, Maureen became a Member of the New Zealand Order of Merit for services to Māori art.

What became quite apparent when wandering through Toi Tū, Toi Ora exhibition before it opened is the broad sweep of exhibiting artists and, in particular, the work they do beyond making art. We teach, we write, we curate, we are on boards, we win awards, we exhibit in biennials, triennials and quinquennials, we (used to) travel overseas, hold residencies and speak at symposia. We are busy. We work hard. And we are good at what we do. We create ecologies of support that involves both turning up to sing a waiata tautoko, and, where needed, having a cup of tea when offering a face-to-face critique. There is a lot more at stake than our individual egos, which have a way of being fanned into flames by a wider art world if you’re not careful. When we make art among our most loyal supporters and harshest critics — our whānau — we know we won’t fall into the ego trap. They will always have our backs, but there’s no way you can get too big for your boots with them around.

Last weekend, I slept under the curved MDF and pastel-coloured carvings that Hone Paku created to adorn our Kahutapu wharenui after studying at Waiariki with Professor Robert Jahnke and working on Te Hono Ki Hawaiki with Cliff Whiting. Our art whakapapa may have shoots that stretch out in many directions, but it will always be tethered to home, wherever and whoever that may be.