Lords of the Ring

Lords of the Ring

Rufguts was ready, maybe even a little cocky. “I might not be the biggest or the smartest,” he said. “But I’m the toughest.” He sat in an armchair in the foyer of the Wainuiomata Intermediate School hall, beneath the roll of honour and next to a stall selling slices of rainbow cake plated-up for $2 each. From the auditorium came the crash-bang of bodies landing on a spring-loaded wrestling ring. Soon, Rufguts, (Guts to his friends), would fight 19 others in Over the Top, a Royal Rumble-style match, for the title of New Zealand All Star Wrestling Champion.

This title was the inaugural championship for Petone’s Valiant Pro Wrestling and the work of a 23-year-old electrician named Hayden Thiele. A wrestling fan since childhood, Thiele had seen a gap in the market. “There were a couple of other places to wrestle in Wellington,” he explained in a phone conversation earlier that week. “But none of them had the production value I liked or thought that wrestlers deserved. I sort of just went out on a limb and created something myself.”

That was more than a year ago. Valiant Pro had since begun to hold matches every second month, and operated what Thiele described as a wrestling academy in Seaview, Petone. This academy kept his fighters match fit, while also training the referees, lighting operators, managers and others needed to bring the glitzy world of professional wrestling to the wider Wellington region.

“We’ve just been getting on our feet and showing the product,” he said. “It’s got to the point now where we decided it’s time for us to crown our top dog, I guess.”

The contenders for top-dog status had come from as far as Invercargill, Auckland, Christchurch, Nelson, Wellington, and, in the case of Rufguts, just over the Remutaka Range, from Featherston. He is 36 and works as a truckdriver, but there was little else, including his name, about his out-of-the-ring life that he cared to share. To do so, he explained, would be like a magician discussing the technicalities of his tricks. Already he had wondered aloud on whether to talk as himself or as his persona, settling for something in the middle. 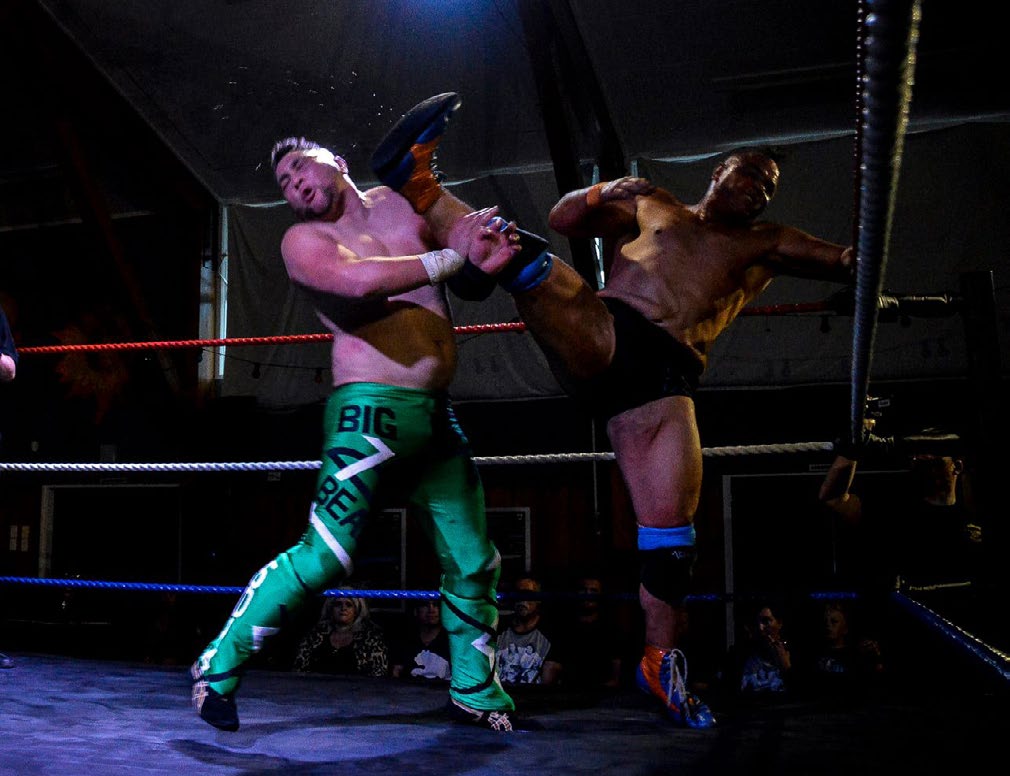 Rufguts trains regularly at Thiele’s academy, and he wrestles about three times a month. “There’s an active scene in Wellington, Invercargill and Auckland. I try to get to them all.”

These scenes constitute what’s been described as a renaissance of professional wrestling in New Zealand. Several independent promotions have emerged since 2000, the latest entry in a long history. Back in 1905, Estonian George Hackenschmidt, the Russian Lion, took on the locals in exhibition matches. The sport had a major boom in the 1930s, with Lofty Blomfield, inventor of the Octopus Clamp (a move known now as the Scorpion Deathlock), its homegrown star. A second heyday came after World War II, and wrestling reached a wide audience through the TV show On the Mat, which broadcast from 1975 to 1983. Theatre has been part of the attraction since the early years. In the Blomfield era, competitors included Kara Pasha (The Terrible Turk), and King Kong Cox, and could be divided into goodies and baddies. Cross-pollination was also a consistent trend. Foreign stars toured often and several, such as King Curtis and Abdullah the Butcher featured on On the Mat. Blomfield fought in the States, taking on world champ Bronko Nagurski. Two On the Mat regulars, Brute Miller and Sweet William, would go on to major fame in America’s WWF as a duo known as The Bushwhackers.

These were the glory days. In the 1980s, New Zealand’s wrestling scene went into decline. And yet, at the same time, the sport exploded in the US with the rise of the WWF, now known as WWE, which introduced a whole new style of spectacle. Personas became bigger than ever, with costumes and face paint the norm, the fights even more dramatic. WWF broadcast everywhere, New Zealand included and many a playground conversation was centred on the exploits of people like Hulk Hogan, “Rowdy” Roddy Piper, and the Ultimate Warrior.

Among those young viewers was Rufguts. Like Thiele, he first encountered wrestling on TV as a child, but in his case, the interest waned. “I grew out of it,” he says. And then one day in Lower Hutt in 2006, he saw it live. “I saw what a beast it was, a live performance, a stunt show, all in one.” The next year, he entered the ring himself, taking the name Rufguts for his rough-as-guts fighting style. “I’ve been known to bite, scratch, claw,” he says. His signature move is the Rough Driver. (“In layman’s terms I pick a guy up and drop him on his head.”) It was a technique at odds with the aim of the evening’s match, because his 19 opponents could only be eliminated by being thrown up and over the ropes. “It’s a unique challenge. All the technical craft of wrestling plays second fiddle.” 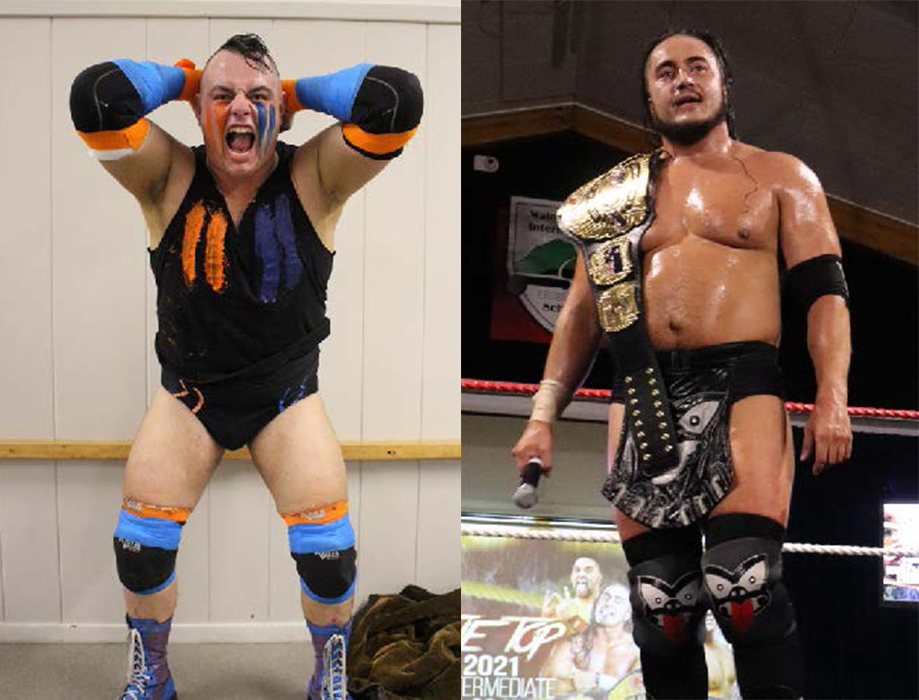 But enough talk. Rufguts stood up, put one large hand on his interviewer’s shoulder and, settling firmly into character, he spoke to an imagined crowd. “Sharing any more strategy with a pencil-necked, four-eyed geek would be counterintuitive,” he said, and walked back toward the ring. The ladies running the cake stall didn’t look up.

The wrestlers were assembled: 20 bulky men still in their street clothes. They were given a pep talk: no in-jokes, no face-offs. If you’re eliminated, you better act like it matters. And please make sure you help pack up at the end of the night. They disappeared to a room out back. When the doors opened at 6:30pm, the chilly space filled with more than 200 people, the plastic chairs seating families, young couples and National Party list MP Chris Bishop. Within most of those families were small boys who fizzed with anticipation.

Before the title fight came the undercards — three matches, one a tag-team bout. Large men in briefs and boots stalked in to loud music, and video clips about each were projected to a screen at the front of the hall. An MC, an American in suit, tie and cowboy hat announced them. “We’ve got a barn burner coming up for you,” he promised. Crowd favourite Ben “The Beast” Priest wore tino rangatiratanga flag tights. Axl Stirling walked out crooning a melodramatic “The Sounds of Silence” before whipping off his suit and tie and entering the ring.

Time for the title match. On screen, a countdown began. It stopped — a technical glitch. It started again. One by one, wrestlers entered the ring until all 20 had set foot on sprung canvas. Among them were Pauly Spitfire, Showtime Will Stone, Danny Octane and Adam Avalanche, who was, according to Rufguts, “the biggest man in New Zealand wrestling history”. There was the The Cuz, who entered to “Poi E” and wore a sort of loincloth arrangement made from hi-viz. And, of course, there was Rufguts himself, his shaggy mohawk resplendent, the word ‘guts’ written in large letters across the seat of his briefs. He threw Nelson’s Brook Duncan around for a bit and had time to stalk the ring, enjoying the cheers of the audience. But it was when Niwa entered that the crowd really let rip. “Niwa! Niwa! Niwa!’ they chanted, and a boy turned to his father. “That’s Niwa,” he said. The man in question is a veteran of both the British and Mexican circuits. A real pro, a full-timer, unlike the others, whose day jobs include radio production, courier driving and managing a plumbing supply store.

Again, the match was a combination of thumping and stomping, of men being picked up and dropped, and, maybe most importantly, mugging. They shook their fists at each other, at the ref and at the crowd. Those boys shrieked. “Go Rufguts,” one shouted. “He’s a cheater!” warned another of Duncan. It was, as Thiele had said, “sports entertainment”. Was any of it for real?

Thiele wouldn’t go as far as to call it all acting. There were no scripts, he said. The action was improvised. “I guess you could say you never know exactly how things are going to go.”

For Rufguts, things were going well. He’d lived up to his name, at one point biting a clump of Niwa’s long hair and garrotting someone with what looked like a shoelace. Gradually, the ring emptied, 17 men had been flung out, and only he, Adam Avalanche and Niwa remained. But with victory in sight, he fell victim to one of wrestling’s chief occupational hazards: hubris. Climbing onto the ropes, he balanced there and waved his arms, stoking the cheers of the crowd, and it was then that Niwa gave him a shove and he flopped out, over the top.

Rufguts was weary, limping even, and back in his regular clothes. The audience had all moved out to the foyer where they sought autographs from Niwa, the eventual winner. “I was in there for 45 minutes and I was on top of my game for 44 minutes,” Rufguts said, and hobbled on across the empty hall. The other wrestlers began to pack up the chairs.