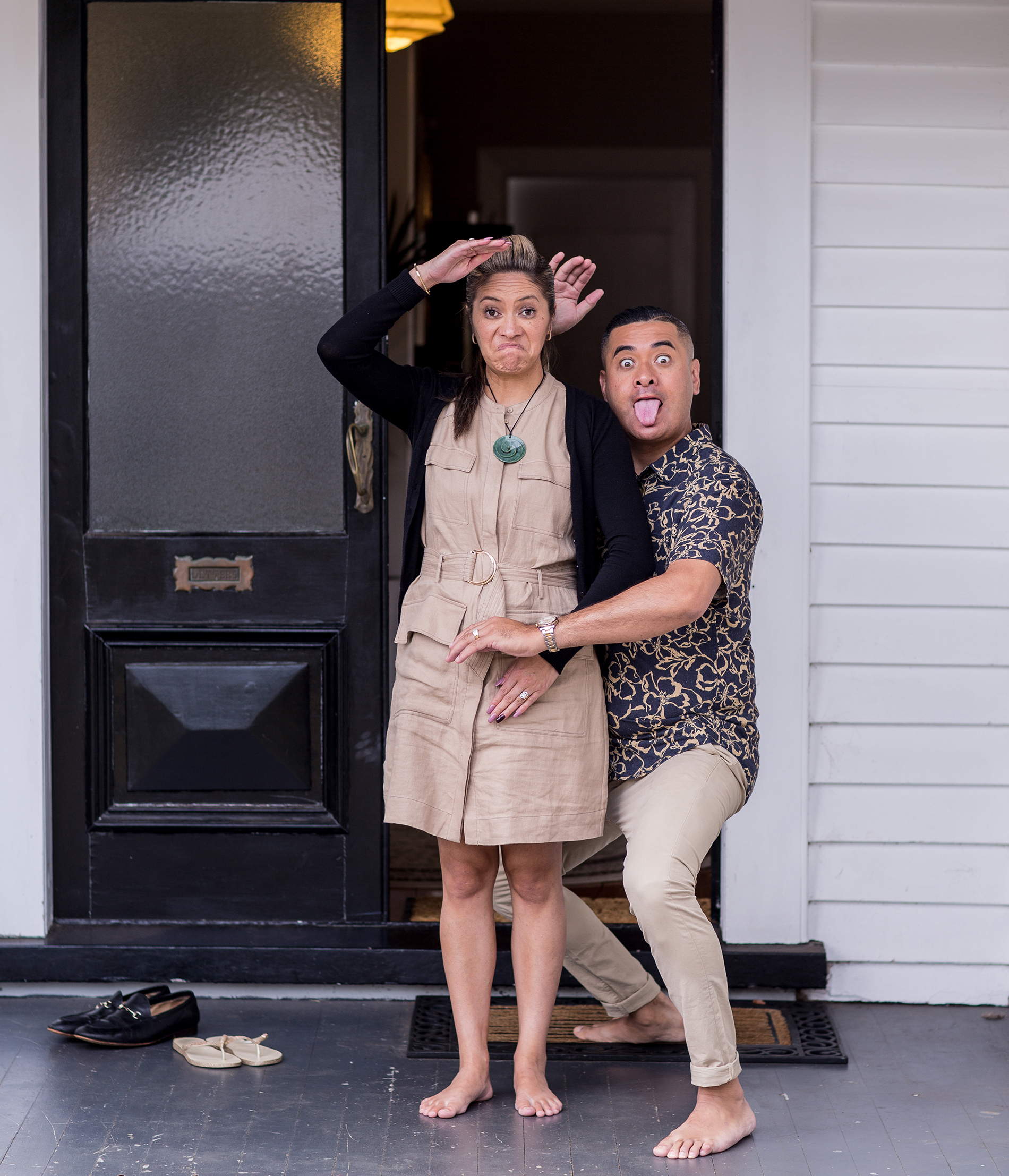 In their new book, Tikanga, Francis and Kaiora Tipene of The Casketeers share their experiences and knowledge of living in te ao Māori.

Kaiora Tipene greets me with outstretched arms, her smile wide. “Nice to finally meet you,” she says, kissing me on the cheek and giving me strong aunty vibes. “Have you eaten?” I tell her yes but she feeds me crackers anyway. We go upstairs, where her husband, Francis Tipene, is waiting for our interview.

There is a special wairua about Francis and Kaiora Tipene. A feeling that emanates from them and makes you feel comfortable, even when you’re sitting with them in their Onehunga funeral parlour, a place which is often overflowing with grief. Downstairs there are bodies being dressed and a whānau grieving and yet the space feels haumaru. Safe.

Perhaps this is why their television show, The Casketeers, has experienced such success, not just in Aotearoa but among audiences worldwide (made for TVNZ, the series was picked up by Netflix in 2018). The show deals with one of life’s most tragic and devastating events — the death of a loved one — and handles it in a beautiful and poignant way, though it also includes plenty of moments of levity. For me, The Casketeers is the best show on television. Maybe that’s because it’s the first time I’ve seen a Māori whānau on mainstream television who are successful, who are living the values of tikanga Māori and speaking te reo Māori without it feeling forced, or portrayed in a negative way.

“Tikanga is about how these principles have been instilled from our parents and our grandparents,” Kaiora says. “I’m so grateful for the upbringing I’ve had. There have been times [growing up] where we didn’t want to go to the marae but we had to, and we were grounded with all this knowledge.” Both Kaiora and Francis hail from Northland; Francis from Pawarenga, a small settlement in the north of the Hokianga, and Kaiora about an hour’s drive north, in Kaitaia. Both have strong memories of growing up on the marae surrounded by their parents and grandparents. Although the Tipene whānau live te ao Māori at home, their children’s lives are very different from the way Francis and Kaiora grew up. In essence, Tikanga is for them, and others like them; a document for those who live in the city, away from their whānau and marae. “Growing up there wasn’t anything written in the form of a book to help us understand,” Francis explains. “It was all kōrero. We were worried about our children and what we would leave for them.”

The couple’s first book, Life as a Casketeer, touched only briefly on their lives outside work, but Tikanga: Living with the Traditions of Te Ao Māori goes a bit further, delving into their values around whānau, mahi, manaakitanga, and the experience of living in te ao Māori. In the introduction, they explain the book’s purpose: “It is about how these concepts affect us from day to day and how we learnt about them growing up. It won’t tell you what you would learn if you were studying them at university, but it will give you an idea of what it is like to have these things to be a part of how you think.”

“It’s not a book about ‘tikanga 101’, it is a document of our experiences and sharing the knowledge that we have,” Francis says. More than a set of rules to learn or a “how to” book, it’s an opportunity to teach readers about another way of living, drawing from a different font of knowledge than the western lens most of us are taught — mātauranga Māori.

I tell them that a book like Tikanga would have helped me immensely. I, like many others, grew up disconnected from te ao Māori and was never taught about tikanga growing up. I tell them that I am now studying full immersion te reo at Te Wananga Takiura O Nga Kura Kaupapa Māori O Aotearoa, a learning institution where Francis and Kaiora were both students, and where they met and fell in love. Francis calls it the best time of his life. The same year, Kaiora became pregnant with their now 15-year-old son.

I tell them that a book like Tikanga would have helped me immensely. Like many others, I grew up disconnected from te ao Māori and was never taught about tikanga growing up. 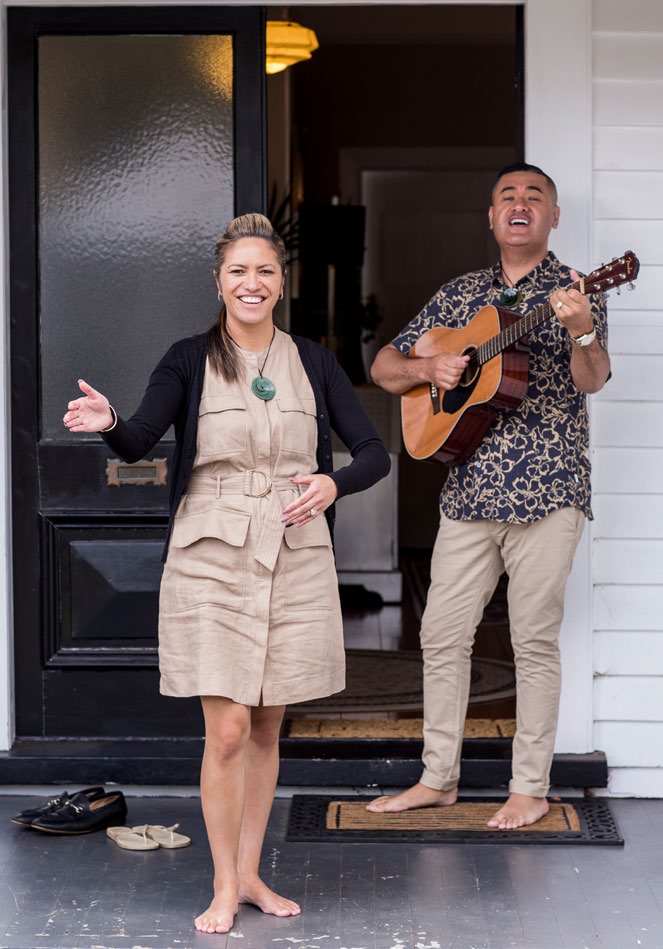 “There’s only one place in the world where we can be truly Māori and that’s on the marae,” Francis says. He believes that a marae visit should be compulsory for all school children. That’s how he and Kaiora learnt: watching nan, watching pop. “The government should put more money into upgrading our marae so they can handle manuhiri and start sending kids once a year so they can experience a marae noho and stay the night.”

At a recent noho marae with Takiura, I realised it was the first time many of my classmates had been on a marae and didn’t know the protocol, or the difference between kawa and tikanga. The two concepts are related, but subtly different. Roughly, kawa is about expected behaviour, or what you do, and tikanga is about custom, or how you do it. Francis explains the difference well in Tikanga with this simple metaphor: “You could say that using cutlery to eat a meal is kawa, but what cutlery you have and how you use it is tikanga.”

Neither Francis nor Kaiora are afraid to share their views on terms with such an abstract concept. What tikanga means is ever changing, and there are differing views within te ao Māori. Different iwi believe in different tikanga, and sometimes tikanga needs to be changed as the world changes. During level 2 and 3 lockdown, the tikanga of tangihanga changed immensely as alert level rules and social distancing requirements were put in place. Francis acknowledges that there will be critics of the book — they’re ready for them. “When you see the title Tikanga, you might think you will know all about tikanga, but no. It’s about living with the traditions of te ao Māori from our point of view, because it’s different everywhere you go.” It’s for this reason they took “ages” to agree to write such a book. Tikanga is specifically an account from the north, he says. He and Kaiora’s iwi is Te Rarawa The accounts or the experiences from Waikato to Tūhoe will be very different, but he and Kaiora are only purporting to write about their own perspective. “It’s alright to write about yourself. No one can criticise you because it’s about yourself.” 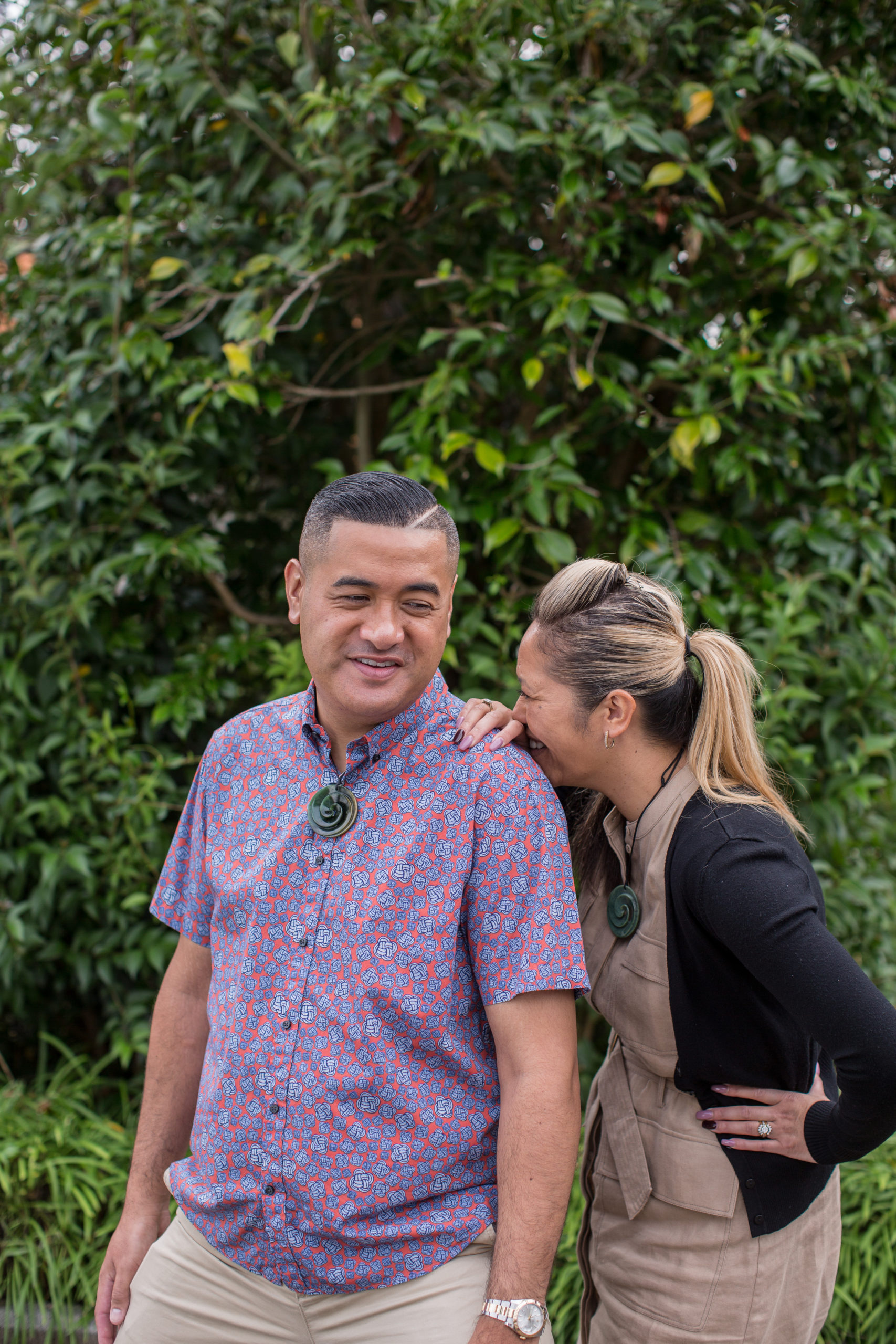 Arguably, it’s that special wairua which allows the Tipenes to broach a topic which can be so contentious within te ao Māori. Filming for season five of The Casketeers begins in July. By now, both are recognised and adored everywhere they go — especially by older Pākehā. “I went to the post office the other day,” Kaiora says. “A Pākehā man came up to me and said, ‘I’m 83 years old. I just want to thank you for opening up the world of Māori to us. I now accept that I can learn te reo Māori through you both. It took your show for me to know that learning te reo is safe’.” She found the interaction touching. “Everything’s changing. Now a lot more reo is being spoken and when you watch TV it’s becoming more out there.”

Kaiora herself wasn’t a fluent reo speaker before studying at Takiura, and although Francis grew up speaking the language, he had learned a different northern dialect. In the book, they express different views on making te reo compulsory in schools. Kaiora is in favour of making it a core subject, while Francis believes marae visits should be compulsory instead. “I would rather have a marae visit be compulsory than to sit there and teach them things they’re going to forget,” Francis says. Kaiora disagrees. “It’s not enough just to know your connection, you have to have lived it as well,” she says. “For me, it’s about having a true foundation of where we come from and knowing who you are.” In general, Francis encourages people to learn more. In Tikanga, he explains the difference between “sharing something and giving away”. “For example, if someone rings and wants me to do a pōwhiri at a tangi, we are going to do it properly. I want 10 minutes to explain why we’re doing what we do, and not just showing up.” Just showing up, without deeper learning, is giving it away, and he isn’t interested in doing that. “It’s the same if you think that you can walk onto a marae with the attitude like you know it or you don’t have to abide by certain things because you watched [The Casketeers].”

They both hope Tikanga will help readers more deeply understand why “Māori do what they do”. “When Māori have a funeral, we finish work for three days and when Pākehā have a funeral, they will go to work until the final day and then come to the funeral.” That’s fine, Francis says, but the book will give Pākehā a deeper understanding of tangi. “Of why we [Māori] all need to go to the tangi and be together, why we need to sleep with the body, why we make decisions together, because that’s just who we are as a people.”

After we wrap up our kōrero, the three of us walk downstairs to a whānau who have just lost their baby. It was the first time the father had met the Tipenes, who had just returned to Auckland from Wellington. The man had just experienced a devastating death of a child and yet he instantly latched on to Francis and Kaiora, showing photos of his bubba from his phone, all with a sad smile. I was moved by this, and thought of it later when Francis said to me that in the funeral industry, one term you hear a lot is “this case” or “that case”. “They are more than just a case to us, they are sharing their final moments with us. They are our whānau and so we treat them like our whānau.”

Perhaps as Māori, we place a huge importance on tikanga because it is an inherent value of who we are as people. Manaaki, aroha, whānau. They are more than just concepts or even laws, it is how we live and have always lived as people. I was reminded of this as I watched this grieving father greet Francis and Kaiora the same way you would your aunty and uncle. That is the real meaning of tikanga.

Tikanga: Living with the Traditions of Te Ao Māori is available in book stores now.