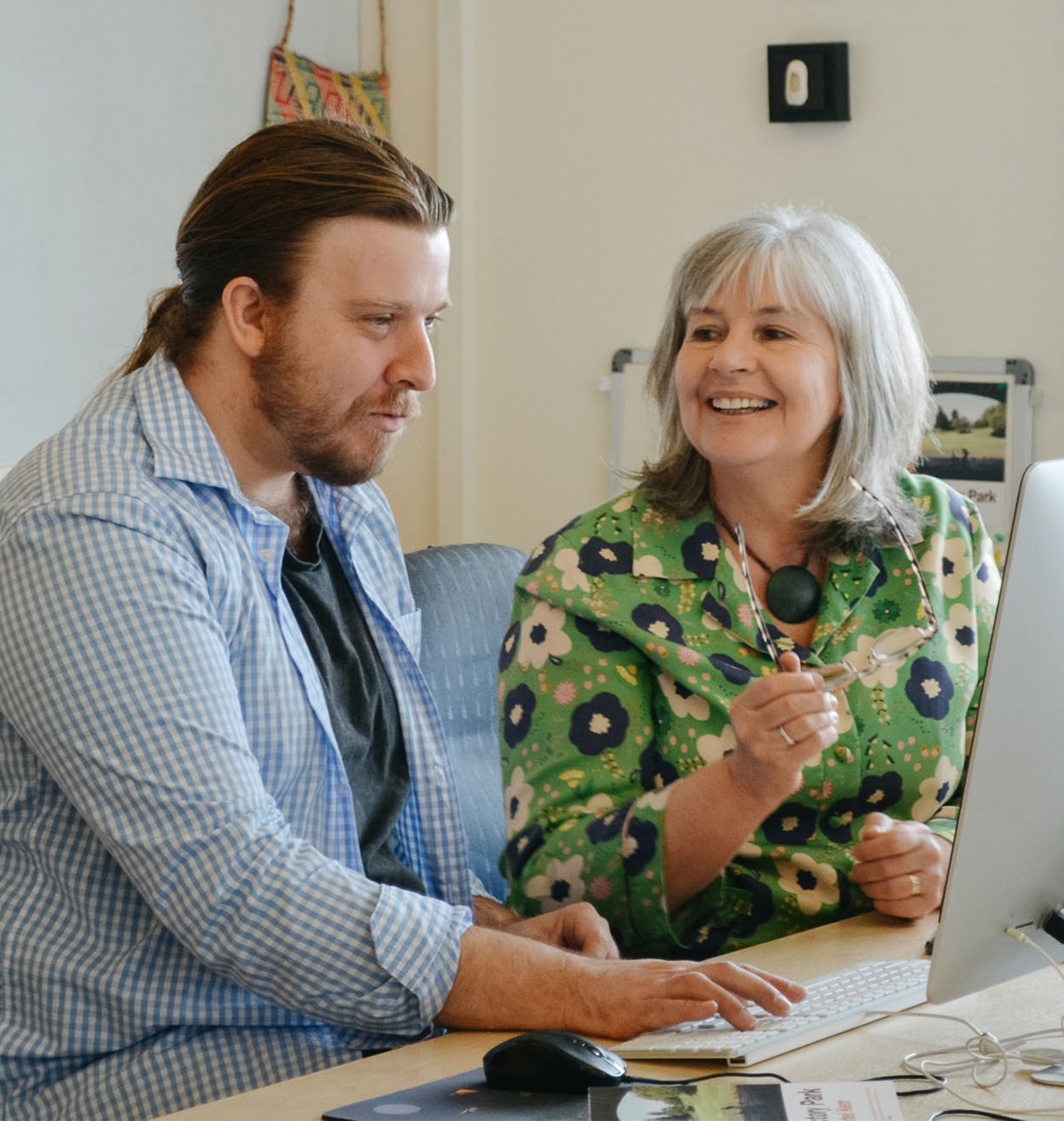 How a tiny mother-and-son publishing house produced bestsellers by two previously unknown authors – back to back.

A sign everything was about to change for tiny Wellington publishing house Mākaro Press came in May, when the owner of Unity Books, Jo McColl, called to demand that they multiply their print run tenfold.

“You have to print 5000 copies,” McColl told Mākaro’s publisher, Mary McCallum. “I’ve seen a book like this before. It appeals to everyone. Go big and print bravely”

The book was Becky Manawatu’s Auē, a debut novel from an unknown author which had won the prestigious Jann Medlicott Acorn Prize for Fiction at the 2020 Ockham Book awards two weeks earlier. Mākaro originally planned to print a few hundred books; the orders for Auē have since swelled to thousands. It’s being translated into French. In Westport, the town of around 4000 people where Manawatu lives and writes for the local paper, one bookseller has sold 400 copies — rather exceeding her original order of two, total.

By the standards of New Zealand fiction, this is an impressive feat — especially for a publisher with no marketing department, no receptionist and a full-time staff of just two — McCallum and her son Paul Stewart. In September, Mākaro followed Auē with another critically acclaimed novel by a first-time author — Victory Park by Wellington author Rachel Kerr. These back-to-back successes have people in New Zealand literary circles wondering, What exactly is Mākaro’s secret?

Mākaro Press was born in 2013, at a time of tumultuous change in the industry following the merger of Penguin and Random House. McCallum is herself an award-winning novelist as well as a former creative writing tutor at Massey University. She describes herself as “falling into publishing backwards” via a collaborative anthology of Eastbourne writers she was editing and decided to publish herself. “Then we decided to publish books that caught our attention and made good stories and we wanted to see out in the world.” Stewart too joined the business more or less by chance — he had recently finished an honours degree in film studies but was struggling to find work. McCallum had him come in to help with the Eastbourne project and he never really left.

It’s hard for fiction to find a home in New Zealand — particularly debut fiction. I felt I was doing something important.

For its first five years Mākaro published a range of genres. McCallum began to notice in her own literary circles just how hard it was for novelists in particular to get their work published. Fiction is harder to self-publish than poetry, and it’s more difficult to get publishers and booksellers enthused about novels than non-fiction. The reality is that major publishers consider manuscripts through the lens of projected sales. In 2018, McCallum and Stewart set up The Cuba Press with publisher Sarah Bolland and pared back Mākaro’s output: one book a year, fiction only. “I looked at what we were doing with Mākaro Press and what really mattered to me,” McCallum recalls. “It’s hard for fiction to find a home in New Zealand — particularly debut fiction. I felt I was doing something important.”

For nearly seven years, McCallum and Stewart plugged away with little recognition outside the country’s tight-knit literary scene, running Mākaro on a shoestring out of the offices of fellow Wellington publisher Roger Steele, who also acted as McCallum’s mentor. For most of this time, their office could barely fit two desks.

From the outset, McCallum and Stewart deliberately pursued first-time authors without a reputation and without connections in the publishing industry. They seek out manuscripts with heart and emotional nuance which otherwise wouldn’t make it to print. That business model is a gamble, particularly as Mākaro has an unusual submission process which asks writers to submit only a single chapter of a book rather than a full draft.

Without a track record in publishing fiction, Mākaro had little to no funding support in the early years, McCallum says. “We used the income from our other books and projects to support the novels until they could support themselves.”

Today Mākaro operates out of Anvil House on Wakefield Street in Wellington’s CBD, in an office which has not only room for several desks but also a meeting room, inside which is a wooden table made from recycled kauri its maker bought off the Mongrel Mob. He sold it to McCallum more than 25 years ago, when she spotted it in a disused railway shed behind Wellington Railway Station. She had previously purchased a collection of bricks off patched gang members on Cuba Street, using them to make a garden path.

McCallum draws on that same curiosity and ability to recognise value others might dismiss when she brings an author’s stories to the world. She is the sort of woman who will greet you with a warm hug, before launching into the backgrounds of everyone around her, despite the fact you are there to discuss her achievements.

A fierce storyteller, McCallum is quick and sharp, yet forgiving and gentle when required. In conversation, Stewart rarely has the opportunity to dive into the conversation but when he does, his mother listens. Verb Festival director Claire Mabey, who plays a huge part in Wellington’s literary scene, says their dynamic works well. “Mary’s passion and enthusiasm are infectious, and Paul is incredibly diligent and detail-driven.” This year, Stewart was awarded NZ Young Publisher of the Year for his work with Mākaro and The Cuba Press.

The work of editing a manuscript largely falls to McCallum. Auē went through six revisions before making it to print. At Mākaro, they are willing to go above and beyond the call of duty for books they believe in, Stewart says. “As publishers, it’s not about us, but about the author and their story.”

Along with the Jann Medlicott Acorn Prize and the Best First Book of fiction award at the Ockhams, Auē went on to win the 2020 Ngaio Marsh Award for Best Crime Novel. It seems remarkable now that it sat in a drawer for months as Manawatu processed rejection letters from several publishers.

“What I like with Auē and Victory Park is that they are not about people who have a tonne of power in the world.”

After finally working up the courage to contact Mākaro by email, Manawatu found someone willing to take her work on. She went in person to deliver her manuscript to McCallum in Wellington. “I needed to do that, I needed her to see me.” The pair developed a close working relationship.

Rachel Kerr was drawn to Mākaro right away, as a first-time author eager to collaborate on the editing process. “I nearly always agreed with Mary’s instincts on things and I specifically really wanted to have lots of back-and-forth discussion in person,” she says.

McCallum’s influence saw Kerr remove the final three chapters of Victory Park — a bold change to the novel Kerr has likened to a creating perfectly cooked cake, in that it now “holds together nicely”.

The novels Mākaro has published so far feel new and different. Writing for The Spinoff, books editor Catherine Woulfe recalled: “I remember what it felt like to finish Becky Manawatu’s Auē, which went on to win last year’s Jann Medlicott Acorn Prize for Fiction. Electric. Elating. An in-my-bones knowing that this story mattered. Victory Park feels that way, too.”

Of Auē, Ockhams international co-judge Tara June Winch said “There is something so assured and flawless in the delivery of the writing voice that is almost like acid on the skin.”

Both Manawatu and Kerr’s writing is notable not only for their unmistakable sense of place and culture — these are books which could only be written here, and of here — but for a lightness in tone which feels like a new direction for New Zealand fiction. Like Janet Frame, Keri Hulme and Alan Duff, Manawatu and Kerr don’t shy away from the shadows of our history. Instead of dwelling on our national traumas, their books restore hope and offer lessons from characters who have been there and managed to come out the other side.

Domestic violence and the ongoing grind of poverty as a single mother are key themes in Auē and Victory Park respectively. And yet each manages to leave the reader feeling buoyed by an overwhelming sense of human goodness.

McCallum describes the novels as about “people who are right down in the bottom of the pecking order. Down the bottom of the income scale, in very difficult positions financially, but they are trying to keep their heads up.” Stewart says he hopes that “readers see themselves in the characters that live on the pages of our titles”.

“What I like with Auē and Victory Park is that they are not about people who have a tonne of power in the world,” he goes on. “We like reading about characters who don’t have it all sorted out.”

Maggie Tweedie is a Wellington-based journalist and the breakfast host of RadioActive.FM.