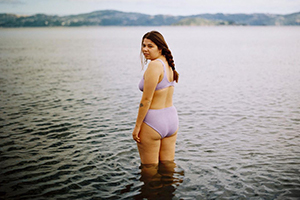 An acclaimed Wellington poet writes about the natural world in sensory detail — writing which is netting her prestigious international literary awards.

Whether she’s gliding through the sunlit ladies’ pond at Hampstead Heath, being thrashed about in the bracing waves of Wellington’s Seatoun Beach, or basking in the turquoise calm of the capital’s Oriental Bay, the city gleaming behind her, Nina Mingya Powles feels braver in water than on land. Stronger, emotionally and physically. “I remember as a teenager feeling so exposed and awkward standing by the side of the pool in my togs,” she recalls. “But the moment I got in, I felt at home.”

Themes of home, and where a person belongs, run through much of Powles’ work and have been central questions in her life. The 28-year-old poet and essayist, whose work has both won and been nominated for a slew of prizes here and overseas, including the prestigious Mary and Peter Biggs Award for Poetry at the 2021 Ockham New Zealand Book Awards, was born in Wellington but has spent a life never quite settled, living for periods of time in cities all over the world. The daughter of United Nations diplomats, Powles’ family moved to Shanghai when she was five. She returned to New Zealand as a teenager, by which time “home was a slippery word”, as she writes in the essay ‘A Girl Swimming is a Body of Water’.

She remembers learning to swim in New York, and really connecting with swimming at the golf club pool in Borneo’s Kota Kinabalu. She feels lucky to have lived in several different countries while growing up, but the flipside is the struggle to establish roots. In her newest work, a luminous collection of essays titled Small Bodies of Water, water is tightly bound with ideas of belonging. The essays ask: What body of water is yours, and where do you get to call home? “I guess I’m always writing in some way about longing and about multiplicity and in-betweenness,” Powles says. “How to exist fully and beautifully between multiple languages.” (Powles’ mother is Malaysian, and Powles lived in Shanghai for 18 months to study Mandarin after promising she’d dedicate more time to learning the language.) “Water is where this happens for me. Underwater, everything is clear and quiet for a moment and all that uncertainty drops away.”

Powles has had a very productive couple of years, publishing three books of poetry and essays in addition to her work as a librarian and editor. In her Ockham-shortlisted poetry collection Magnolia, Powles navigates the nuances of her Malaysian-Chinese-Pakeha background, and she writes of food and memory in her 2020 collection of essays Tiny Moons: A Year of Eating in Shanghai. She describes food as a connective force, a source of strength and joy, saying it creates a portal for her to explore ideas of intimacy, longing and belonging. “I love writing about food with care and tenderness, because that’s how I try to treat my body in recent years, after so many years of diet-related anxiety,” she says. For Powles, swimming and eating are easily linked. “One of my favourite things about swimming is also the meal you eat afterwards because it makes you so ravenous.”

“Underwater, everything is clear and quiet for a moment and all that uncertainty drops away.” 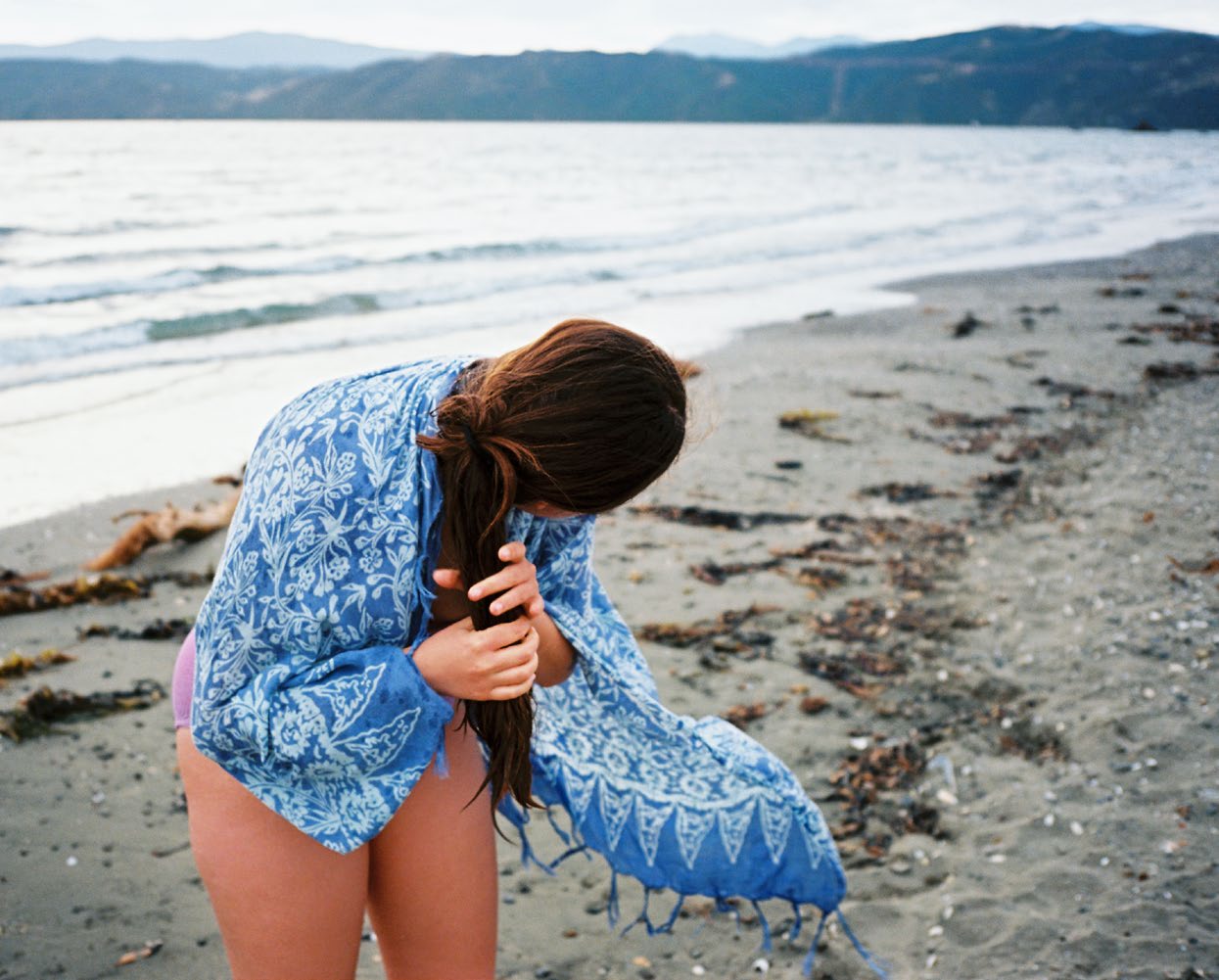 Some of Powles’ earliest memories were formed while living in New York as a child: checking out Sailor Moon videos from Blockbuster, hanging up Halloween decorations in the hallway of her family’s apartment, learning to ride her bike around the park on hot summer days and getting soft-serve chocolate ice cream from the truck around the corner. “I can still smell the dim sum restaurant we always used to go to in Chinatown,” she says. Powles developed a deep nostalgic obsession with pop culture, after growing up watching Britney Spears and *NSYNC on MTV after school. She was a keen reader, and plugged into not just pop culture but also the reading trends typical for someone her age — the first serious piece of writing Powles authored was a Harry Potter fanfiction saga that she posted on fanfiction.net when she was 13 years old. It wasn’t until years later, during her final year of university in Wellington, that she connected with poetry after taking a modern poetry seminar. She says her mind was blown discovering the work of major poets Anne Carson and Mary Ruefle. Given the option of submitting either a critical essay or a small portfolio of poems for an assignment Powles, newly inspired, chose the latter. Then, eager to delay figuring out a career path with her English literature and Chinese double major, she applied for an MA in Creative Writing at the International Institute of Modern Letters and secured a place — a fees scholarship helped convince her parents that it wasn’t a terrible idea. At a loose end following the MA, she applied for a scholarship to study in Shanghai, having recently discovered another new joy — being a language student — and remembering her promise to her mother. “I’m still learning what those 18 months meant to me,” she says now. “I started writing two books, attended a high school reunion, became temporarily fluent in Mandarin, met the person I love, and learned to be alone.”

Powles still feels most drawn to Wellington Harbour, pushing and pulling from it throughout her life like the tide.

For the past two years Powles has shared a North West London flat with her partner, school teacher and photographer David Marshall (they met in Shanghai after she looked after his cat Otto for a weekend), living on the edge of an inner-city forest park. When she first moved over she worked at a Chinese community charity teaching Chinese cooking workshops to British schoolchildren, and she still works part-time jobs to pay the rent, but the city quickly opened doors for her literary work. “It pretty much changed everything for me,” she says. Her books have been bestsellers at the London Review Bookshop, and she won the 2019 Nan Shepherd Prize (which celebrates nature writing and provides a platform for emerging nature writers from underrepresented backgrounds) for her early piece “Small Bodies of Water”, from which her new collection of essays takes its name. In 2018, Powles won the UK Women Poets’ Prize.

Her work has been endorsed by notable authors, including award-winning British writer Robert Macfarlane, who with his works of nature writing — Landmarks, The Old Ways and Underland — is a true poet of the natural world. Of Small Bodies of Water he says: “Its language trembles on the brink of poetry . . . Beautifully, dreamily, intricately.” Scottish journalist Amy Liptrot, author of the exhilarating nature memoir The Outrun, says the collection establishes Powles as “a distinctive new voice: attentive and tender”.

Powles loves being part of a big literary scene, and the anonymity of London life — she notes that it draws a lot of people who, like her, are from elsewhere. “There’s a sense of drifting, people passing through searching for a home, which I identify with deeply,” she says. “I’m learning that I can feel at home in almost any biggish city. Anywhere where there’s a Chinatown or just multiple Asian supermarkets and dumpling and noodle restaurants and where there’s somewhere I can swim.” She has come to believe you don’t need to hold a country’s passport, to be born there, or even intend to stay for long, to be able to call somewhere home. It was a line in Robin Wall Kimmerer’s Braiding Sweetgrass that prompted the revelation: “A place becomes home when it sustains you, when it feeds you in body as well as spirit.” It unlocked something in her, she says, reading that.

Powles still feels most drawn to Wellington Harbour, pushing and pulling from it throughout her life like the tide. Earlier this year, she returned from London for three months to mark the publication of Magnolia. Still in the thick of the pandemic, London feels dire to Powles and while she contemplated coming home for good, she wasn’t quite ready — there’s still a few years left on her visa, and she wants to see them through. “I quickly became embarrassed to admit to people I wasn’t coming back for good,” she says. “It’s really, really hard to upend your life, as I know so many New Zealanders have done.” Three months away from her life in London was the longest she could manage financially. “Those three months were such a gift.”

While back here, Powles spent a lot of time swimming. Though she feels braver in the water, she is perhaps a naturally anxious person and it’s telling that even in her element, she can’t bring herself to wear goggles in the open water. “I don’t want to know what’s down there,” she says. “I remember going snorkelling with my dad a few times in Samoa and although beautiful, that kind of swimming freaks me out.” Once, she saw a sea snake “swimming happily beside me, its little head popping up above the surface just like me”. After that, she stuck to the pool. “I guess the sea brings you face to face with the unknown. You can either stay away from it or you can submerge yourself all the way in.” It feels like a liminal space for now, one that Powles is still negotiating. 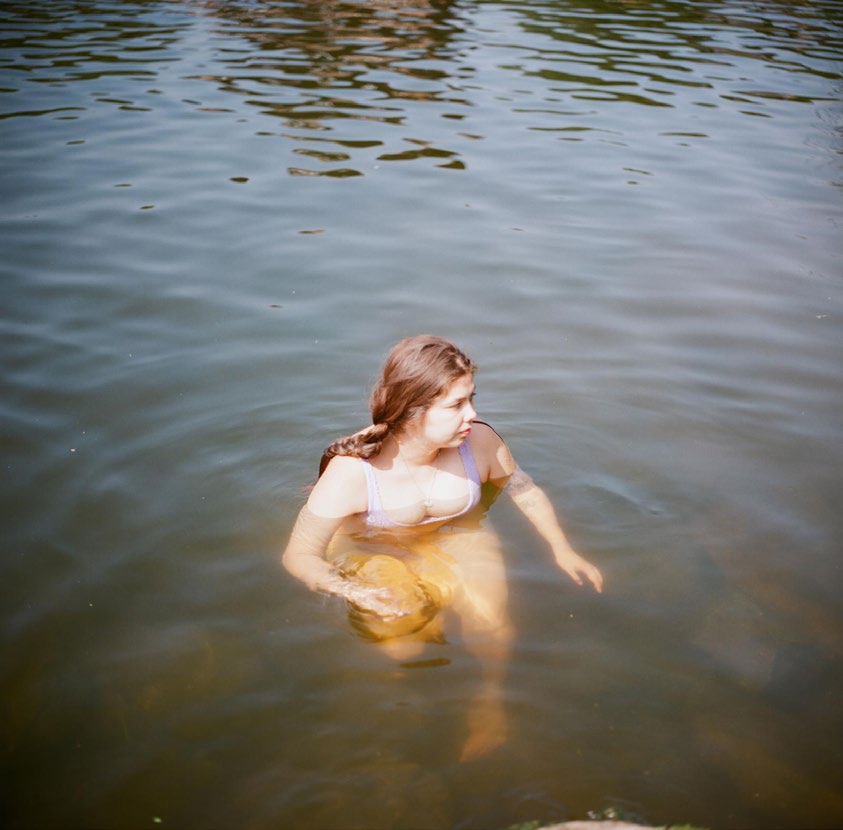 Once while swimming in Samoa, she saw a sea snake “swimming happily beside me, its little head popping up above the surface just like me”. After that, she stuck to the pool.

Powles navigates her anxieties in her writing, something she found impossible until very recently. “My thoughts often feel like a web of connected fault lines, each small rupture causing another bigger rupture,” she says. “I can’t control their spread.” She’s still figuring out how to put the feelings into words; therapy helps.

For Powles, poetry is about play, experimentation and pure feeling, while essays are an exercise in weaving together a tangle of threads to form a coherent shape. “But I’m always writing essays that look like poems and poems that look like essays. I can never decide, I’m always doing both at once.” Whatever she works on next will be much shorter than Small Bodies of Water, she says. That work was about cataloguing all the tiny things that remind her of home, especially related to the natural landscape, which feels on the brink of disappearing. She has plans to write a “small book of weird poems” about art-making and ecological grief. In her essays, Powles writes with a lovely sensory detail and clarity about the natural world. She tells me about happy swimming memories as a child boogie boarding on Waikanae Beach where pipi poke through the sand. Of the ladies’ pond she describes how the names of the birds commonly found on the heath — coot, moorhen, mistle thrush and kestrel — sound strange and foreign compared to the birds she is accustomed to in Aotearoa — tūī, pūkeko, kākā, ruru and takahē. Kōwhai is a recurring motif throughout the pieces.

Powles makes pond swimming sound lush, where I’d previously thought of ponds as sludgy, fathomless and murky. I ask her to describe the pond and she talks about beautiful yellow irises, water lilies, ducklings and shimmering blue dragonflies. She says the pond smells green, weedy, muddy and soft and that her favourite time to swim is autumn when there is still a little warmth from the sun but the pond is quiet, with only herself, a heron and a few ducks carving a path through fallen leaves on the water’s surface. But still, she says, she can’t look down — she’s too scared of what she’ll see.

Kiran Dass is a freelance writer and critic. She lives in Whanganui.

Small Bodies of Water is available in bookshops from 14 September.