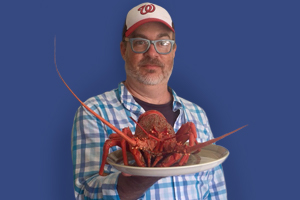 Above: Dan Kois holds a crayfish during his time living in Wellington.

The American writer on a one man mission to bring New Zealand literature to the United States.

Enthusiasm as a tool for cultural critique is one which adheres strictly to laws of scarcity. A good reviewer knows that if they were to offer unfettered enthusiasm about too many of the restaurants, books, albums or films which came into their orbit they would render that excitement functionally useless to their audiences. Some deal with this by choosing never to indulge, critiquing culture from a lofty position even when faced with the very best of what the world’s creatives have to offer. Others know that a little bit of hyperbole deployed ever so sparingly can be used to considerable effect.

In January 2020, senior editor Dan Kois of the popular American website Slate wrote of New Zealand author Elizabeth Knox’s 2019 epic fantasy novel The Absolute Book: “It is an experience of continuous awe . . . In the same way it’s occasionally clarifying to inch your feet up to the edge of a precipice and take a good look down, it’s quite bracing to come up against the hard edge of your own imagination as you try to pursue a visionary author through the limitless expanse of hers.”

The passage appeared in a review titled: “This New Zealand Fantasy Masterpiece Needs to Be Published in America, Like, Now”.

“It was maybe overkill — but the goal was to get dollar signs clanging in the eyes of US agents and editors.”

“I just went apesh**t,” Kois says. “I compared the book to Ursula Le Guin, Susanna Clarke.” Other points of comparison included Philip Pullman’s wildly successful His Dark Materials trilogy, the critically acclaimed 2013 historical novel Life After Life by Kate Atkinson, and Pulitzer Prize-winning author Colson Whitehead. “All of whom had legitimately occurred to me in the course of reading it, but it was maybe overkill — but the goal was to get dollar signs clanging in the eyes of US agents and editors.”

It worked, and quickly. Viking Penguin purchased the rights, and you can buy Knox’s novel in the United States like, now. As a long-time editor for Slate (and the website’s former culture editor) Kois had strategically utilised his enthusiasm for books in the past, but the reception to his piece about Knox worked “beyond my wildest dreams”. “I think every critic has this dream of doing the Roger Ebert My Dinner with Andre thing,” he says, referring to the late and mighty film critic Roger Ebert, whose highly favourable review of the slightly obscure 1981 film was credited with attracting a big-enough audience that it ran in cinemas for a year afterward. My Dinner with Andre is now considered one of the best pieces of American filmmaking ever made.

“I do think there’s a specific mode which works,” Kois says. A sort of surprised, astonished enthusiasm which can feel a little bit unfamiliar to readers. “I think they’re used to reading critics being sceptical and cautious in praise, and careful not to go over the top. So on the occasion you do go over the top, it can really make an impact.”

Kois’ interest in New Zealand literature reaches back further than the recent flurry of overseas interest in our country fueled by Jacindamania and our Covid response. It formed when his family lived in the Wellington suburb of Island Bay for about four months in 2017 while he was writing a book of his own (the 2019 memoir How to be a Family). Shortly after arriving, he sought out New Zealand books to read, starting with Eleanor Catton’s first novel, The Rehearsal (he had decided that The Luminaries, a book set in an 1800s gold rush, would perhaps not give him the insight into New Zealand contemporary family life he was hoping for). The Rehearsal is set inside what Kois describes as the “insular hothouse atmosphere” of a drama school, where the characters were always watching and talking about one another. That inward fascination was not entirely dissimilar from the lively online community Kois discovered on Twitter, where his tweets about New Zealand writers and writing were immediately discussed by Kiwi publishers, journalists and others in our comparatively tiny literary scene. “Everyone clearly knew everyone, which fed into one of my existing hypothesis of New Zealand life anyway,” he says.

As a self-described enthusiast of, rather than an expert on, New Zealand literature, Kois believes part of what makes our writers interesting is a willingness to experiment — and have those risks rewarded by the industry establishment. “I don’t know if that’s the result of being in a place where by definition the monetary stakes are pretty low,” he says. “I have to imagine even the bestselling book in New Zealand is not going to make anyone super rich.” This is correct. Even the 2020 Ockham prize winner Aue, a runaway success by all metrics applicable to New Zealand fiction, was dealing with print runs in just four figures. While there are obvious downsides to the fact that even the most successful books can’t guarantee a New Zealand author a living, Kois wonders if there are silver linings when most authors are working day jobs on top of their writing. If you’re not relying on your writing to be a commercial success, perhaps that makes you more willing to take the kind of risks that produce extraordinarily odd and interesting works like Pip Adams’ second novel, the Ockham-nominated Nothing to See, or Tara Blacks’ graphic novel This is Not a Pipe.

“Everyone clearly knew everyone, which fed into one of my existing hypothesis of New Zealand life.”

“Most of the [Kiwi] writers I’m reading are not beholden to the academic writers workshop faculty standards most mid-career American writers are in, where you’re really dependent on continuing publication to keep that tenure track job. It does tend to make writers a little bit gun shy about doing weirder things,” Kois says. “It’s not that there’s no one in other countries experimenting, but it is true that novels as weird as [Pip Adams’] The New Animals are not winning literary prizes in the United States.” (The New Animals, Adams’ debut novel, won the Ockhams’ top prize in 2018).

Kois is currently plotting how to repeat his success with The Absolute Book, embarking on a “one-man solo mission” to make every editor in America read Nothing to See. “I honest-to-god think Nothing to See is just a contemporary masterpiece, a book that does things I’ve not seen books do before and it does it just effortlessly,” Kois says. He may have a harder time replicating the feat, simply because Adams is not as established as Knox — something Kois is quick to point out was likely more relevant to The Absolute Book’s Viking deal than his review. Knox has had several books published in the States already, including 1999’s The Vintner’s Luck.

Knox herself, while grateful to Kois, was not “falling over herself ” to thank him. “She sent me a nice message saying the next time you’re in New Zealand we’ll buy you lunch. She, I think reasonably, was not overly or wildly effusive — I think she’s happy the thing which happened happened, but she’s confident enough to know that it’s not my review which got her the publishing deal. She knew she had written a bloody good book.” It would seem that, like a good reviewer, a good author also knows when you should go for broke, and when to rein your enthusiasm in.