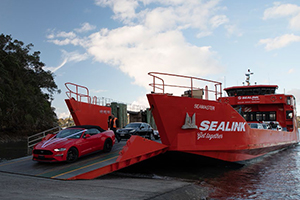 Above: Cars coming off the ferry from Auckland. Photo: Lesley Stone

Waiheke is seen as the playground for Auckland’s wealthy, but its permanent residents are among the super city’s oldest and poorest. Still, to old timers, Te Motu-Arai-Roa is paradise.

Old-timers on the motu call Oneroa “town” — in pointed defiance towards that adolescent agglomeration over the water, otherwise known as Auckland. We are 12 nautical miles from the city, and that’s a minimum safe distance for us locals, who become rare, almost fugitive figures in summer, as we get invaded by city slickers. Our population pole vaults from 8000 to around 30,000; a temporary town of up to 300 anchored boats lie in Oneroa Bay. It’s picturesque — twinkling anchor lights and all — but we know that not all of them have holding tanks.

Waiheke may be presented by the media as awash with the cash of the super-wealthy, but that’s only part of the island’s story. Despite the very visible mansions on headlands and the holiday homes, those of us who actually live here have the oldest and poorest demographic in what was once Auckland City. We have a high number of people living on fixed incomes (their pensions) on the island both because many people from elsewhere choose to retire here, and because lots of the alternative lifestylers who moved over decades ago are now of retiring age. We also have a relatively high number of single-income households because, years ago, solo mums on social welfare were sent by what was then called the Department of Social Welfare to the island to find cheap places to rent — not such an easy task now.

The flash houses are seen by everyone arriving by ferry and grace many glossy magazines, but the reality is most Waiheke islanders still live in very modest houses, with smallish though well-loved gardens. Like me and my wife, in the two-bedroom century-old kauri cottage we’ve lived in for 30 years — along a quiet dirt road, lined with dead cars (try-hard though — a Roller up on blocks, a BMW 7 Series festering with broken windows and no wheels under a tree on the verge).

Not so long ago, a funeral was held for Jim, a much-loved bus driver and rugby league coach. The sports club was standing room only, and the crowd spilled out over half the paddock. The millionaires and the vintners and the celebrities (bar one, the Mad Butcher) were not in evidence. Perhaps they are the kind of people who do not frequent the rugby league club, perhaps they do not catch the bus so often.

A true Waiheke Islander has been described as someone who can enter an empty room and get an argument going.

Too much has been written about our island for tourist blurbs. I’ve done a weekly column for our feisty wee newspaper, Gulf News, for more than 20 years, so I have some sense of what goes on. Me and my mate Alan (the brewer, a vital community figure) have been the “Opinionated Islanders” on the local radio station. Surprisingly, of late, we’ve begun agreeing too much. Which is odd, for a true Waiheke Islander has been described as someone who can enter an empty room, and get an argument going. Our fractious community used to agree on only one thing: what to do with s**t.

Every home on the island must collect its own rainwater, and dispose of grey (and worse) water on site. This means every section has to have some greenery surrounding it, for a dispersal field. We will never accept wall-to-wall housing, or high-rises. And so we wage an unremitting local-bylaw war against the once-removed high and mighty on the mainland, who want to change this state of septic affairs to allow for higher density buildings and more rates for council — no thank you, we say.

no thank you, we say. In recent years, however, we have come to agree on two other things. First, we want to rid the island of predator pests. Unlike the mainland, Waiheke has no possums, meaning a high population of native birds, especially the loveable, lumbering-in-flight kererū.

Secondly, we want marine reserves around our coast. According to a 2015 Colmar Brunton survey commissioned by the local board, about 67 per cent of us reckon more marine protection is a necessity in the Hauraki Gulf and 64 per cent say that protection must be in the form of marine reserves. As the largest population living entirely within the Hauraki Gulf Marine Park, we are at the epicentre of this environmental crisis.

For day visitors, who might enjoy serene time at a vineyard or a secluded beach, it may come as a surprise to learn that the island is, officially, just another suburb of Auckland. And with this comes a turgid tale of big brother/little sister sibling rivalry and one-way one-upmanship. We remain convinced we are cleverer by far, simply because we chose such a lovely place to live. But the big city has one on us in terms of local government funding and its mechanisms of power. Thanks to the super city, our library is far and away bigger and better than it would be if we had to fund our own. Our eclectic community orders interesting books on a wide variety of subjects; our shelves creak under the weight of so much oddball know-how.

It’s a decidedly odd thing that Waiheke is part of the electoral constituency of Auckland Central: if there’s one thing we’re definitely not, it’s Auckland Central. We have horses that excrete free manure along our roads, no traffic lights, no American fast-food franchises, no road rage. You’ll see signs that say “Slow down — you’re here”.

Which leads us to some pointers for those summer visitors who want to be like locals. No, we don’t call ourselves “Waihetian”. That’s a dead giveaway. Local time is 10 minutes late. Fifteen, maybe. Visitors are welcome. Rude or impatient ones, not.

We’re not only about Bordeaux-style wines here. Go visit Lance Blumhardt at Jurassic Ridge — you’ll learn about the centuries- old natural Roman wine-making tradition involving giant terracotta amphora, a lot of time, and not much else. Awards for his Montepulciano and other wines line the walls, though Lance (once a brain surgeon) now has little time for wine-tasting competitions: “The results — they’re just not scientifically reproduceable.”

Generally ours is a curiously over-educated community. There’s Sharonagh, a PhD in fine arts, right now changing the sheets at holiday rental properties; Parmjit, an MSc in computer science at the local dairy.

My list of all the different creative disciplines practised on the island now stands at 56. Last week, I met Kashmir, a puppeteer, Shellie, a burlesque dancer, Lisa, an improv comedian, and Deborah, a sculptor. We’ve got the world’s best busker, well-known authors, and Selina Tusitala Marsh, poet laureate for 2017–2019.

Yes, we are welcoming — if the vibes coincide. Like with the young expat Argentinians. They have fitted in just fine, working hard, congregating in groups on beaches, sipping maté, strumming guitars, demonstrating sublime hacky-sack and round-ball skills, and volunteering for environmental projects. Their influence has rocketed our local soccer team up to an entirely different league.

The ferry ties us and the city together, in an umbilical embrace. The rhythm of island life is set by the boat. Every island resident has vivid memories of running down the wharf, to just miss out as the gangplank is lifted. Waiheke, it is often said among locals, is in the shape of a seven-legged dog. Our dog faces away from Auckland, looking at the clearer night skies over the Coromandel. It’s symbolic too, that our main ferry terminal is at the dog’s rear end.

Alex Stone is a writer and artist from Waiheke Island. He has written a weekly column for the island’s newspaper, Gulf News, for the last 20 years.