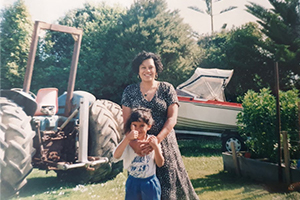 Above: Shilo Kino, aged five, and her mum Deborah Nolan outside their house in Waipu in 1995. Photo: Supplied.

This coastal northland town is awash in Scottish imagery and cultural influence, but its pre-colonial history is a little harder to come by.

There is a sign along State Highway 1 that hundreds of people must pass every day on their way north to Whangarei. WAIPU, it says, in big letters. A hundred thousand welcomes. Next to it is a painting of a giant white man dressed in a kilt, holding bagpipes. He is the mascot for Waipu, a symbol of a town deeply rooted in Scottish heritage and history.

I used to get asked “No hea koe?”, “Where are you from?”, and I would say Waipu, a small coastal town in Bream Bay. That’s where I grew up, where I spent the formative childhood and teenage years of my life.

About a two-hour drive north of Auckland City, Waipu has a population of more than 2000 people and is famous for its idyllic beach and a coastline that swarms with Auckland tourists every summer. It’s like most small towns across the country. In it you’ll find a primary school, a Four Square, a petrol station, a takeaway shop. Perhaps what makes Waipu distinct is the monument to its Scottish (not English) founders and the Waipu Highland Games, running for nearly 150 years and known around the world as one of the longest-running Scottish gatherings in the Southern Hemisphere.

The Waipu Museum is filled with names and faces and numbers and in-depth history of the story of the Scottish settlers who arrived at Waipu in the 1850s. As a child growing up in Waipu, I was taught that my home town was settled by Scottish settlers, led by Reverend Norman McLeod, a Presbyterian minister from Scotland. We celebrated his journey to Aotearoa: he was a pioneer, a renowned preacher, a leader who led more than 800 migrants to Waipu, trying and failing twice to settle elsewhere before reaching New Zealand — first in Canada, where harsh winters and failed crops forced them to look further south, then Australia, where three of McLeod’s sons died of typhoid. I learned about the extreme hardship he and the hundreds of other migrants went through to get here, building their own ships and preparing their own food to seek a better life for their families. In many people’s eyes, McLeod was a hero.

I knew the details of the Scottish settlers’ long journey before I learnt the name of my own ancestor, Hōne Heke.

My childhood memories are laced with bagpipes and kilts and learning the names of people like Norman McLeod. I am Māori. My roots are deeply connected to Ngāpuhi and to my ancestors who discovered Northland long before the Scottish settlers arrived. And yet I knew the details of McLeod’s long journey before I even learnt the name of my own ancestor Hōne Heke, a rangatira and leader of my iwi. I learnt about the history of 1000 Scottish Highlanders arriving in Waipu in the 1850s before I learned about the history of my own people: the arrival of Kupe in the Matawhaorua canoe and how he discovered the Hokianga, or Rāhiri, the founding ancestor of Ngāpuhi and descendant of Kupe.

It is painful for me to grasp that I grew up knowing more about Scottish culture than my own. I don’t remember anything being done to acknowledge Māori except at primary school, where Mum would come and teach the kids how to count to 10 in te reo. They say that a place can shape you, and Waipu has given me an understanding of how I came to be. It played an integral part in the identity crisis I encountered later in life: I was detached from my culture, I didn’t know anything about my own history, I had to actively seek out on my own everything I wasn’t taught in those formative years. In a way, it is my own colonial childhood trauma that I am now paying for as an adult.

Mum’s second husband was a Pākehā man, and we moved to Waipu when I was four years old. We were one of the only Māori families in a town mostly made up of Pākehā. Alienating is an understatement. How could we feel like outsiders in Te Tai Tokerau, the area our ancestors are from? Scottish culture and history were so entrenched in our world that Mum even hired someone to play the bagpipes for her wedding entrance song.

Mum loved eating kina. We hardly visited our marae, we never practised our culture at home for reasons that are complex, but Mum could never put down her kina. She would sit on the deck and slurp out the insides, until the bucket overflowed with empty kina shells. Some weekends we would take the boat out to Langs Beach, back when it felt like that part of the world was untouched, when the backdrop wasn’t mansions, but just the sky and the sea. Mum and my stepdad would flop backwards, disappearing into the moana and I would sit on the wobbly boat, pretending to be the captain, looking out for their bobbing heads until they emerged with a net of kai moana. Those were the moments I felt a sense of belonging, a connection to Waipu. But those moments disappeared as fast as they came, as soon as we got out of the sea and back into the land.

What is the true history of the place I grew up in? What was the relationship between Māori and Scottish settlers? What happened before the 1850s, before Scots settled into Waipu? The colonial version of history has dominated the narrative for so long, I wonder whether the “real” version can ever be known for sure.

The Waipu Museum Board has included a representative from the local hapū Patuharakeke for several years. The museum is working on an addition to its current display which will reflect more of the pre-European history, as well as the relationship as it developed between the Scottish-Nova Scotian settlers and local Māori. This work, Weaving of Two Cultures will be completed on 31 May. This is progress, but I wonder why it took so long.

Waipu is growing. Up to 2000 new homes are forecast, adding to the current 1897 dwellings. A 118 per cent population increase is predicted. But the Māori population is still small, and the acknowledgment of tangata whenua is still very much lacking.

As an adult, revisiting Waipu brings a lot of internal conflict. As someone who is on my own journey of reclaiming identity, language, culture, I see a town still 20 years behind. I was living on land that once belonged to Māori, to the Patuharakeke people, yet instead we celebrated foreign white men and a culture that isn’t mine.

When I stand up and say my pepeha, I no longer say “no Waipu ahau”. Waipu is not my home, but rather a place I once lived.

Shilo Kino is a journalist and author of The Pōrangi Boy. She is currently undertaking a year-long te reo Māori immersion course with Te Wānanga Takiura.