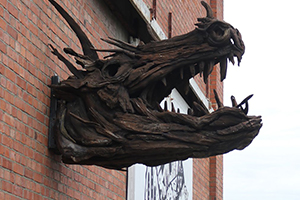 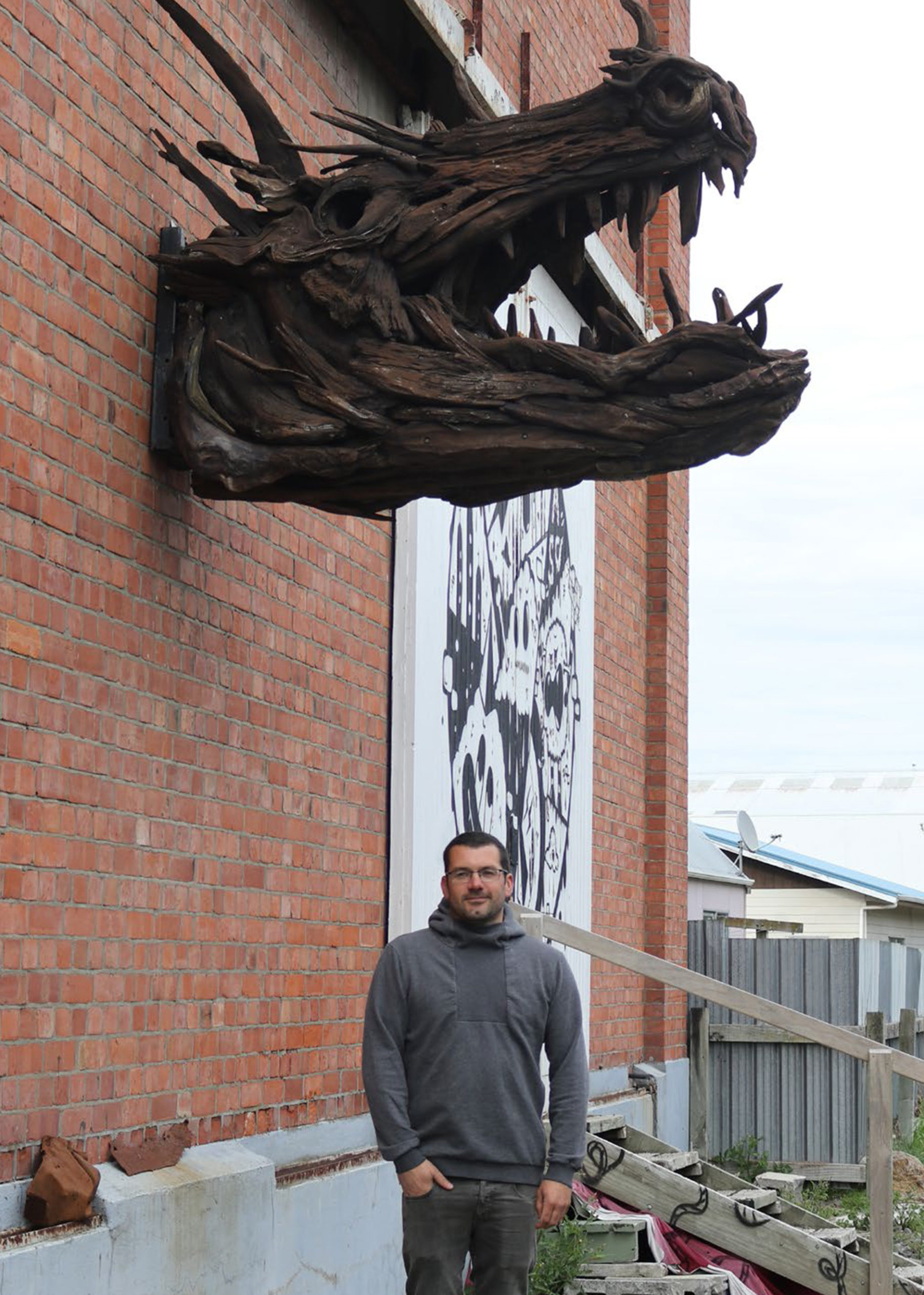 Above: The sculptor stands beneath one of his creations. Photo: Supplied

How an English backpacker with an unusual history became the most sought-after sculptor in Whanganui.

Jack Marsden-Mayer didn’t just wake up one morning and decide to build a five-metre high Tyrannosaurus rex out of driftwood. He’d been thinking about it for years, but it took a beer and some badgering to finally spur him into action.

“I was working at a canoe lodge in Raurimu and having a drink with my boss when I told him I’ve always wanted to build a sculpture,” says the 41 year old. “He said, ‘So why don’t you?’ and got his tools out of the truck.”

Someone liked the resulting sculpture and paid Marsden-Mayer to build them another one. Then someone else did, too, and the whole thing snowballed.

That was 12 years ago, and since then, Marsden-Mayer reckons he’s built more than 500 driftwood sculptures, including a giant humpback whale, horses, fantails, giraffes and goats. Basically any animal that exists and some that don’t, including the unicorn Marsden-Mayer is painstakingly crafting as we chat. “I’m working from an image of a horse,” he says, a Lancashire accent still lightly clinging to his vowels. “And that’s the 49th moa I’ve made.” He gestures to a two-metre high work that’s yet to have its nether regions attached.

To find Marsden-Mayer, head up a ramp and make a left inside an old brick warehouse, the kind that once housed bales of wool. We’re in Whanganui, and this cavernous space, its walls tattooed with street art, is the HQ for what is now Marsden-Mayer’s thriving driftwood-sculpture business. He’s never advertised, but word of mouth has led to his pieces being owned by everyone from garden designer Tony Morrell to Sir Richard Taylor, the Weta Workshop maestro who certainly knows his way around fantastical creatures. “Richard ordered two sculptures for his wife Tania — a wild boar and a tahr goat — which was a huge honour,” says Marsden-Mayer. “No one knows design like Richard, so when he told me he had a great love of sculptural art and called my work beautiful and masterful, it was pretty thrilling.”

Marsden-Mayer makes whatever anyone is willing to pay him for, preferring to craft creatures from the animal kingdom because the driftwood readily lends itself to the rounded shape of animals’ muscles. “I’ve been asked to build a train and a motorbike from driftwood and I’m sure I could, but making nature from nature is what really interests me.”

Each sculpture starts with a rough idea, an outline which is then transferred in chalk to the workshop floor. If it’s a large piece, Marsden-Mayer will weld together a lightweight steel frame. Then the fun begins: rummaging through the enormous mound of driftwood in the corner of his studio, some of which he estimates could be hundreds of years old. “I don’t really like to cut driftwood to fit the sculpture but prefer to find pieces that nature has already shaped for me.” He gradually layers the wood, securing it with galvanised roofing screws that add to each piece’s rustic vibe. A smaller sculpture, like a fantail, can take around a week while a dinosaur can clock in at about six weeks.

It’s a long, laborious process, even when you leave out the time spent trawling North Island beaches in his truck for raw materials. Marsden-Mayer does a driftwood run prior to starting each piece, or whenever stocks are getting low, driving from Whanganui to the Kāpiti Coast and hoping the beaches will cough up sufficient materials. “I have favourite beaches, such as Te Horo’s stony beach, where I’m usually pretty lucky and Paekakariki, where the wood tends to be smaller. The driftwood gets smaller the further south from Whanganui I go. I usually spend a day or so a month filling the truck with appropriate wood to fit the sculpture I’m building.”

He delivers most of his sculptures himself, driving the country in his battered van and taking in the city nightlife whenever he can. “If, for example, I’m dropping off work in Auckland or Wellington, I’ll stay the night to check out the club scene.” Marsden- Mayer is not just a sculpture artist, but also a sometime DJ.

It’s probably no surprise he chose such an unconventional path. Marsden-Mayer’s story begins in Chorley, half an hour’s drive north of Manchester, a town roughly the same size as the one he now lives in. “My mother wanted a child but didn’t want a man to go with it and her best mate was a gay man who wanted a child but not a wife. It’s an arrangement that was probably quite unusual back then, but they had me, and I was raised by my mother but visited Dad at weekends and holidays.”

Although neither parent was wealthy, Marsden-Mayer was enrolled as a boarder at Scotland’s Gordonstoun School, the elite private school where his classmates included Zara and Peter Phillips. “My mother started a primary school, which I attended, and eventually built it up to 40-plus students. That earned her some money, but she also put herself in debt for me to be able to attend Gordonstoun.”

Although it was a life that allowed ample access to books, culture and art, Marsden-Mayer had no idea which path he wanted to take. At age 16, with two years of school still to complete, he was expelled for drinking alcohol. “It was probably the making of me, because I got to attend the local college and get a balanced perspective of life outside a posh school.”

He cycled through various jobs, including as a caregiver, earning enough cash to buy him a ticket around the world. “I was 18 and wanted to travel, so I did that for three years.” His itchy feet struck again in 2007, when he “planned to go as far away from England as possible, but somewhere they spoke English”. That led him to New Zealand, initially in Queenstown, where one of his caregiving clients had an artist daughter.

“I would take this old bloke to visit his daughter, and she’d be making sculptures out of vines and driftwood. I would give her a hand and that’s probably where the seed was set for doing my own sculptures.” He moved to Whanganui in 2007, made his first sculpture a year later, and has been living there ever since. “There’s a great art scene here, and artists are really friendly and collaborative.” It helps that the rent on his studio is reasonable and his landlord is noted Whanganui potter Ross Mitchell- Anyon. Marsden-Mayer shares the space with a photographer, glass artist, street artist, woodworker and jeweller.

Home is in Castlecliff, a short drive away (“Nothing is very far in Whanganui”), where he bought last year with his partner, Michelle Hoek, who runs a pet-minding business. When Marsden-Mayer isn’t working on sculptures, he’s busy trying to squeeze as many succulents as he can into the couple’s compact garden. He says he’ll keep doing what he’s doing for as long as he’s able, but would eventually like to start creating animal heads that hang on walls, like a hunting trophy.

“I can usually achieve a finer detail with animal heads than with larger pieces. I call them eco trophies, because they please people who like animal heads on their walls but they’re also good for the anti-hunt brigade because nothing had to die for their art.” 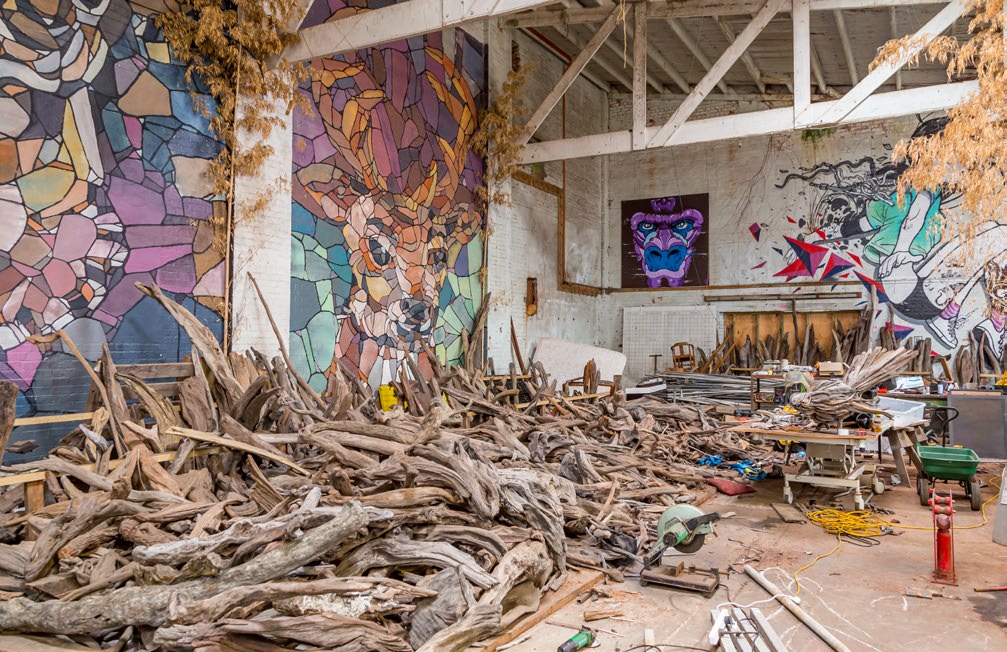 Sharon Stephenson has been a freelance journalist longer than she can remember and is a recent convert to country living, having fled inner-city Wellington for a 16- acre lifestyle block in Kāpiti.