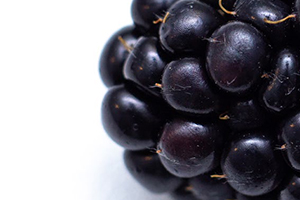 Above: New Zealander’s consume — per capita — the most boysenberry ice cream in the world.

Eaten fresh off the vine or in a real-fruit ice cream, boysenberries are synonymous with summer. But how did they get here – and how did New Zealand end up the world’s biggest boysenberry exporter?

They’re almost ready. Lined up in their thousands on tall bushes beneath an early summer sky, the boysenberries gleam like hairy red-wine jewels, or bloodshot spider’s eyes. Just a few weeks from now these bulbous berries will be picked from the vine, weighed, packaged and sent across the country and abroad. Because New Zealand is the world’s leading producer of a particularly unlikely fruit.

Simply put, we’re mad about boysenberries. Every year around Christmas they flood the market in punnets, jams and frozen treats. According to Tip Top, Boysenberry Ripple — first released in 1960 — is the fourth-highest selling flavour in both two-litre tubs and the humongous 16-litre tubs used for rolling ice-cream cones at dairies. In prepackaged cones, the boysenberry Trumpet is second only to a classic chocolate. And while the Ripple is exported to China, Malaysia and the Pacific Islands, it is here at home that we race to the dairy like pigs to the trough, consuming — per capita — the most boysenberry ice cream in the world, and never more than in summer.

The boysenberry is a Frankenstein’s monster of a berry and a uniquely juicy, hefty little mongrel. First developed early last century in Anaheim, California, by Swedish immigrant Rudolf Boysen, it’s a hybrid of the European raspberry and blackberry, the American dewberry and the loganberry. Boysen was an amateur horticulturist who spent his days splicing various genera and cultivars. Then in the early 1920s, before his creation made him famous, he disappeared, leaving his farm a tangled decaying mess.

Fortunately for future fruit lovers and one particular sector of the ice-cream trade, George M Darrow, a scientist with the United States Department of Agriculture, had caught wind of Boysen’s efforts. Darrow enlisted the help of Walter Knott, a renowned berry expert, and chased down a lead which eventually found the men standing in an overgrown paddock on Boysen’s abandoned farm. There they found a few frail vines amongst the weeds, pulling them from the earth and transporting them, presumably with governmental seriousness and secrecy to Knott’s property in Buena Park, California.

By 1932, Knott had followed that greatest of American traditions and began to monetise his discovery. In a world of tiny berries — miniscule pip-filled newts — the monstrous boysenberry proved an immediate hit. So popular were these rotund numbers that the long-suffering Mrs Cordelia Knott’s preserves were soon drawing crowds that would line up outside the property for hours at a time. Walter Knott, ever the entrepreneur, set about establishing a ghost town and theme park to entertain visitors, before eventually fencing the farm off and establishing a bonafide amusement park which remains on the site as Knott’s Berry Farm to this day.

Real fruit ice cream is a Kiwi export that, like bare feet in public, is too far ahead of its time.

Unfortunately for Walter, in 1955 another more successful Walt, Walt Disney, built the first Disneyland just 15 kilometres down the track. Knott would hang on in the berry business for another 20 years until, following the death of his wife, he turned himself to conservative Republican causes and eventually died of Parkinson’s.

It was in the early days of Knott’s Berry Farm that boysenberries were first introduced to New Zealand, transported directly from the park itself. According to the New Zealand Journal of Crop and Horticultural Science, the first imported plants were grown at Masterton in 1938, followed by a second crop at Kerikeri in 1939. By 1940, at least 20 hectares of boysenberries were being grown in Auckland. Plantings increased steadily until a peak in the 1980s when several hundred hectares of berries were spread across the country from the Waikato to Nelson. The fruit were favoured for their size and suitability (as Mrs Knott had discovered) for jams and preserves.

Today, approximately 20 orchards stretching over 200 hectares produce around 2700 tonnes of New Zealand boysenberries every year. The majority are grown in Nelson. According to the New Zealand Horticulture Export Authority, more than half of the annual crop is exported. Because of the fragility of the berry, the vast majority of exports are either frozen whole berries or concentrate. Much of the concentrate is sent to Kuwait and the European Union. Australia receives most of our individual quick-frozen berries, due mostly to geographical proximity.

The value of the annual crop sat around $3.4 million in 2018, making for a healthy small industry but not exactly shifting the national GDP needle. And for all our national adoration of the boysenberry, the berry game is not immune to the labour abuses rife in New Zealand’s horticulture industry. In April 2020, the Matangi Berry Farm in Waikato and its director were fined more than $120,000 for employment breaches relating to more than 200 migrant workers. The penalties came just days after the neighbouring Ye Olde Berry farm was ordered to pay more than $75,000 in penalties and unpaid minimum-wage and holiday pay. Ironically, Ye Olde Berry Farm complained on social media several months beforehand of rapacious pick-your-own customers taking more than their fair share of the produce.

The value of the boysenberry is as much cultural as it is economic. No, the industry will not singlehandedly save us from the economic impact of Covid-19, but it may well make it more bearable. This is due to what is, for my money, the most groundbreaking — and perhaps enduring — development in boysenberry-adjacent cuisine: fruit ice cream. On a scorching afternoon in December, I sat at a thus-far-innocent orchard 20 minutes outside of Hamilton, cone in hand, lapping at the sweet-yet-tangy, candyfloss-pink slush. For a moment I was less a sweaty bogan on a farm, and more a golden Greek god, the very avatar of summer itself. Real-fruit ice cream is something of a novelty to New Zealand. A quick survey of my Instagram friends abroad revealed that, internationally, boysenberry ice cream is “weird” or “yuck”. Obviously, it is in fact “yum”— it’s simply a Kiwi export that, like bare feet in public, is too far ahead of its time.

The particularly delicate and fragile nature of the berry also provides significant barriers to access overseas (in 2019, a local Californian media outlet declared boysenberries all but extinct in the state — the berry’s native home). By the time a boysenberry makes it abroad it is no longer fresh fruit, and the subsequent ice cream is vastly inferior. Maybe that’s what it all comes down to. A weird little berry, grown in a weird little country, obsessed over and world-famous only in New Zealand: it’s no wonder we have such affection for this hybrid freak, so many years after it was abandoned by its creator and the businessmen who followed after. It’s the people’s fruit, and it’s berry season.

Don Rowe is a freelance journalist and law student.