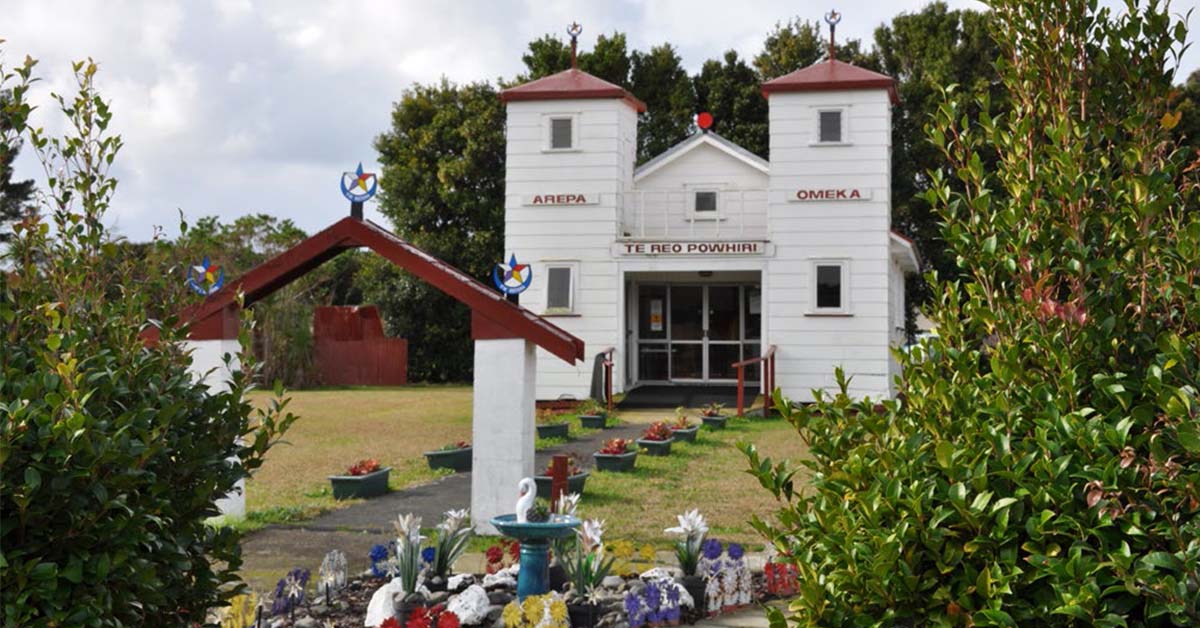 Above: The Rātana Church at Te Hāpua. Photo: Tom Moody.

Literary and political history fuses with family memories when a writer visits the country’s northernmost settlement, looking for traces of the late great Matiu Rata.

The Far North: a sense of distance is written into its name. Even from Auckland, where I live, the north lengthens towards the end of our world: this is Te Hiku o te Ika a Māui, the tail of the fish. Driving north takes much longer than I imagine it will, even once the traffic clogging greater Auckland disperses. The further north I go, the number of roads diminishes; the number of harbours grows.

When I was a child, my family drove north for most of our summer holidays. Once we ventured up to Cape Rēinga, based at a motel in Kaitaia: we played mini-golf on a course that was more paddock than green, and frolicked on Ninety Mile Beach; one night I stayed up late to watch A Hard Day’s Night on the motel’s black-and-white television. More often we spent holidays closer to home — at Pākiri Beach, our papakaīnga, at Stanmore Bay on the Whangaparāoa Peninsula, or in Paihia in the Bay of Islands. We drove to Whangārei for weddings and to Warkworth for land meetings. My father seemed to have directions to everywhere in the north imprinted in his brain, though perhaps this was function of Northland’s scant roads. When I grew up and wanted to visit the Bay of Islands again, I asked to borrow a map. “You don’t need a map,” he said. “Just drive north and turn right.”

Twice in the last year I’ve ventured north to places I’ve never been before — turning right both times. In March 2020, days before the first national lockdown, my husband Tom Moody and I drove to Whangaroa Harbour, about 280 kilometres north of Auckland. I was doing research for a book that became Shining Land: Looking for Robin Hyde, a collaboration with photographer Haru Sameshima. Hyde — a ground-breaking journalist as well as a novelist and poet — spent a month here in 1937, on a stilted shack in the mangroves, working on the final manuscript of her now-classic novel The Godwits Fly. Hyde described the harbour as “dark as greenstone and shaped like a heart”. It’s a place of secret coves and deep water, laced with bulbous, bushy fingers of rock. This is where Hongi Hika spent the last months of his life, Bishop Pompallier set up his first mission.

While Hyde was staying there, Percy Mitcalfe — her best friend’s husband — drove her in his Model T Ford to the very far north. She wanted to see Kapowairua (Spirits Bay), the place the godwits gathered to make their annual pilgrimage to Siberia. The roads were clay, and the journey was long: en route they slept on lilos amid prickly mānuka. Cape Rēinga at the time couldn’t be reached by car, only on horseback, so Hyde contented herself with Spirits Bay, which she described as “not a sad place, but a startling one”, with its white sands and heavy surf, “the sea speaking with a massive voice”.

My father seemed to have directions to everywhere in the north imprinted in his brain. When I visited the Bay of Islands, I asked to borrow a map. “You don’t need a map,” he said. “Just drive north and turn right.”

The morning of the Spirits Bay visit she and Mitcalfe stopped in Te Hāpua, then — as now — predominantly Māori and the northernmost settlement in New Zealand, more than 400 kilometres north of Auckland. A local family fed the visitors with bacon and scones and tea, and a nine-year-old boy played the guitar for them. Hyde glimpsed “the first glitter of white sands” across the Parengarenga, New Zealand’s northernmost harbour. After their visit to Spirits Bay, Hyde and Mitcalfe returned south via Ninety Mile Beach, where the Model T got stuck in the rising tide.

I wanted to go to Te Hāpua, and in late May this year my husband and I set out from Auckland. This time I wasn’t trailing Hyde. I’d been commissioned to write an essay on a famous New Zealander for the book Nine Lives, and without thinking twice I’d chosen the late Matiu Rata as my subject. Rata was a man of the people who became a Minister of the Crown, a driven, charismatic leader of great mana, beloved in my family. During the Kirk government he was the first-ever Māori Minister of Lands and the first Maori Minister of Māori Affairs since Apirana Ngata — Waitangi Day and the Waitangi Tribunal are part of his legacy to us. He was also a son of Te Hāpua, born there in 1934. When Robin Hyde visited to eat her bacon breakfast, he was not quite four years old.

Te Hāpua today is still small: it’s home to fewer than 200 people, the majority of them Ngāti Kuri. There are no shops, motels or facilities for visitors, no places to buy coffee or play mini-golf. Instead, there’s a profound tranquillity, something close to peace. The “glitter of white sands” spotted by Hyde is the famous Kokota sandspit at the harbour’s southern head, snowy and celestial. The Parengarenga Harbour is quite different from the Whangaroa, with its stretching sands and shallow water, dissolving into narrow creeks. Parenga means “bank”, so this is a place of many banks. On a topographical map it resembles a frog — or a taniwha — with numerous splayed feet, one arm reaching into the Pacific.

The world into which Rata was born was rich in natural beauty and iwi inheritance, but this was Depression-era New Zealand. Te reo was spoken at home but forbidden at the local school. Te Hāpua was a place of sand and water, and Rata’s parents struggled to make a living on the nearby gum fields. In the early 1940s they moved to Dargaville for farm work. After Rata’s father died in an accident, his mother took the children to Auckland, where she found work as a cleaner and they shared a house with 11 other families.

In May, when we visited Te Hāpua, it was a rainy Sunday. The place was quiet, a few people fishing from the wharf, a small meeting going on at the marae. The wind carried the sound of marsh birds and barking dogs, and of a kid on a bike, the card stuck in the wheel clicking and whirring. Horses wandered by, roaming like pets, and a few cows grazed near the water’s edge. It’s dotted with small houses and small boats, its rugby field waterlogged.

Looming large is Te Reo Powhiri, the Rātana church, a replica of the red-and-white temple at Rātana Pā. It seems huge in such a small place. Mat Rata was ordained a Rātana minister, and after he died in a car accident at the age of 63, he was buried wearing his Rātana robes.

Our destination was the urupā, up a steep unsealed road. Our car couldn’t make it, so we parked at the marae and climbed up the verge, dodging horse dung and scrub. The urupā has one of the best views in New Zealand. The harbour stretches, a rippling silver, out to a glimpse of ocean blue and the curve of the white sandspit. Rata’s grave, castle-like in its stone construction, is a mirror image of the Rātana temple below. It reads: ‘Matiu Gift of God.’

That’s what I feel about him, and about the place where he was born.

Paula Morris (Ngāti Wai, Ngāti Whātua) is an award-winning writer whose essay on Matiu Rata is featured in Nine Lives, published by Upstart Press and on sale now. Nine Lives is reviewed on page 89 of the magazine.

This story appeared in the December 2021 issue of North & South.