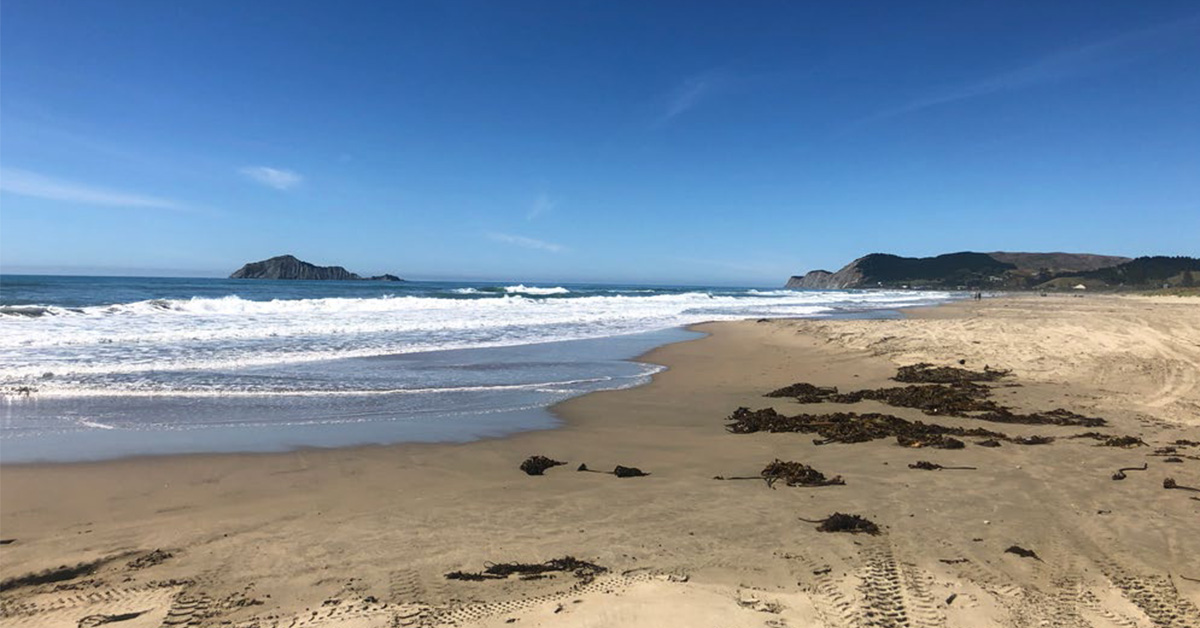 Time passes and people change, but the sun still shines at this North Island beach town.

In one of the first photographs ever taken of me, I’m in a paddling pool with my chubby arms outstretched, grinning happily. My mother sits beside me, watching. It’s 1970 and we are at Waimārama Beach in Hawke’s Bay, at a bach owned by the Catholic Church — it was known as “the nuns’ house”. Over the years, my parents, sisters and I stay here frequently, sleeping in skinny single beds with candlewick bedspreads in dark rooms with crucifixes above our heads and pictures of Jesus on the walls. The nuns’ house always smells of dust and is a bit scary. In the 1970s, the Catholic Church was one of Waimārama Beach’s biggest landowners, with a portfolio of several baches and a retreat for trainee priests. My mother was a devout Catholic — her uncle was a priest, as were some of her parents’ best friends. She read prayers at church and in return got us cheap holidays at the nuns’ bach.

Waimārama, a small beachside community about 20 kilometres south of Havelock North, is accessed by a road meandering over hills of farmland. In the 1970s and 80s it was the holiday destination of choice for many Hawke’s Bay locals — the baches were plentiful to rent or buy, and an ocean view didn’t yet carry a hefty price tag.

As a child, the trip in our Morris Minor from Napier to the beach always felt like an eternity. “I can see the sea,” one of us would yell when we finally saw a sliver of blue between the hills. We always stopped at the crest and took photographs of Bare Island shimmering in the middle of the ocean.

On some trips, our large extended family of aunts, uncles and cousins would take over two Catholic baches, erecting tents on the large lawns. We joined together for barbeques, the kids thronging along the beach. We dug for pipi with our toes, throwing them into buckets and leaving them to spew out sand overnight before someone would transform them into fritters for breakfast.

We smeared ourselves in coconut oil, flipping over when we started to burn. Later, we'd take turns peeling the skin off our backs.

I was 13 when I made my first beach friend. Brigid was tiny, like a bird, but a few months older than me, which conferred on her immediate authority. She was my first friend who didn’t rent a bach or stay in a tent but actually owned a beach house. It was right beside two Norfolk pines on the main road.

At the beach, Brigid, her cousin Paula, my school friend Helga and I spent our days laid out on beach towels, turning ourselves like rotisserie chickens. We smeared ourselves in coconut oil which dripped on our towels, flipping over when we started to burn. A day at the beach was only a success if we returned to our baches unable to sleep because it hurt to lie on a sunburned limb. Later, we’d take turns peeling the skin off our backs.

One night when I was 14, I snuck out, leaving pillows in my bed in case Mum checked in. Brigid and Paula were already at the bonfire party when I arrived. Smoke billowed everywhere, making me cough. Beer bottles clinked and occasionally smashed as the party went on and on until past midnight, more people appearing like ghosts in the darkness. A boy came over. I could barely make him out through the haze, but he pulled me into him and kissed me — my first. “Mark Th___ is my dream guy. I think he likes me,” I wrote in my diary the next day. Boys and bonfires turned me into a hopeless romantic.

A summer later, Brigid persuaded me to enter Waimārama’s beach beauty contest (concerns about female objectification weren’t on our radar then). Brigid cheered me on, along with a weird older man who whistled at me from the audience. After a few of us strutted along the back of a sheep truck in our bikinis, I was declared the winner by two male judges. Someone hung a silk sash hung around my sunburnt torso: I was Miss Waimārama 1985.

On our first holiday after the divorce, I took my daughters camping at Waimārama Beach for the first time — I had long ago lost touch with the place which had been so special to me. They were ten, seven and four, and I wanted to show them a place that was etched in my memory. Whether fantasy or real, I hoped they would love it as I had.

I wiped away tears as we drove past Brigid’s old house and the Norfolk pines towering like giants. My old beach friend had recently passed away after a long illness.

Things had changed in four decades: the campground had moved to a new site, and the old one had been sold off and subdivided, filled with houses. The camp store made flat whites. The surf club had a swanky new clubhouse, apparently part-funded by Xero founder Rod Drury, who owned a house along the beachfront. The old nuns’ baches were now privately owned — they’d been pulled down or renovated. A typical beachfront house fetched seven figures.

On our camping trip, it rained relentlessly for a week. I took the pot from our camp kitchen and scooped out water which had pooled in the canopy of our Kathmandu three-room tent.

“Mum, I thought you said it’s always sunny here,” my eldest, Isabella, said. In the rain, at low tide, I took the girls to the beach to hunt for pipi. “Here, dig with your toes like this,” I said. But there was nothing, just wet sand. The pipi beds had gone.

Finally, on day four, we took our soaked things and moved to a rented bach.

My parents came for a visit. Mum had recently been diagnosed with Alzheimer’s. She wandered around the garden, staring blankly at plants she was once familiar with.

And then the sun came out, blazing like it did when I was a child. An apple tree hung in front of the sunroom like a painting.

That night, the sea lulled me to sleep just as it did when I was a teen.

Years later again, I sit on a sundrenched verandah across the road from the old nuns’ house, which now has a boat parked out the front. It’s my first visit to a Waimārama bach since Mum passed away and my first since the Covid lockdown. The apple trees are starting to bud and I’m soothed by the hiss of the ocean.

Isabella will stay here next, with a group of her own friends. She’s 21 and has been coming here ever since that first rain-soaked trip a decade ago. “I love Waimaz,” she tells me.

Later, I walk along the beach with my partner. It’s low tide, my favourite time, when Bare Island looks so close I feel like I could touch it. Hammers ring out above the slap of the waves as builders put the final touches to a mega-mansion.

The pipi beds have returned — shells are scattered along the sand, gleaming in the sunlight.

Sarah Catherall is a Wellington-based journalist.

This story appeared in the March 2022 issue of North & South.