New Zealand is the world’s largest dairy exporter after the European Union. Over the last 30 years, industrial scale irrigation and a 670 per cent jump in the use of synthetic nitrogen fertiliser has increased the intensity of the way we farm. It has also transformed the landscape.

During that time, milk production has tripled. And since 2002, the area of dairy farmland has increased by 42 per cent.

The costs are significant:

– Hundreds of thousands of tonnes of nitrogen leach into lakes and streams each year; millions of tonnes of topsoil wash into the sea.

82 per cent of river water in farmed areas isn’t swimmable.

– As forests and wetlands are cleared, three quarters of New Zealand’s native freshwater fish species are at risk of extinction.

– Dairying is responsible for 23 per cent of New Zealand’s greenhouse gas emissions.

NZ should have half the number of cows

Dr Mike Joy, a freshwater ecologist at Victoria University of Wellington and a leading expert on land use, has a simple but radical solution:

Instead of asking what we can extract from the land, ask what the land can sustain.

He wants to count all the consequences of intensive dairying: environmental, social, cultural and economic. 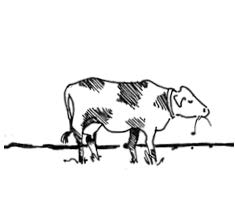 Go back to old-school farming

“People don’t realise how much we have changed natural biological systems to an industrial model,” Joy says.

– Cut synthetic nitrogen and other artificial supplements that push the land beyond its limits.

– Return many dairy conversions to other uses like forestry, fruit growing, beekeeping or whatever the land is suited for.

“If you were to halve the number of cows in New Zealand, there would be improvements right across the board,” Joy says.

– Reducing herd numbers and fertiliser use would see fewer pathogens, sediment and excess nutrients escape into waterways — a win for the 80 per cent of New Zealanders who say freshwater is their main environmental worry.

– Fewer cows means a major decrease in methane and a drop in carbon emissions. Regenerative practices would see carbon build up in soil. Less fossil fuel would be needed to produce fertilisers and reduce milk into solids. Reforested land could help draw carbon dioxide back out of the air too.

– A Massey University study showed that reducing cow numbers by nearly a quarter on a model dairy farm meant synthetic nitrogen fertiliser and winter crops were no longer required, increasing profit by 43 per cent.

By moving away from milk, farmers could take advantage of emerging sustainable markets.

– “Every new farmer who wants to join Fonterra has to buy shares. Those shares go into building more infrastructure to dry milk. You can’t take on board the reality of having to reduce intensity when you’ve locked in that much infrastructure.”

– Industry-backed voices have an outsized impact on regulation. “The science has been captured by the industry. That’s not to say the science is wrong. Its goal is to make more industrial farming because that’s where the money’s coming from. There’s no money for the alternative.”

– 35 per cent of dairy farms have $35 of debt for every kilogram of milk solids they produce, according to the Reserve Bank. That leaves farmers vulnerable to the slightest fluctuations in dairy prices — and makes experimental thinking a potential financial threat.

“It’s not us versus the farmers,” says Joy. “It’s the industry, with the farmers getting squeezed in so many ways in the middle. The farmers don’t want to be farming like this. They have to drink the water as well.”

Ollie Neas is a journalist and legal researcher based in Wellington.

This story appeared in the December 2020 issue of North & South.